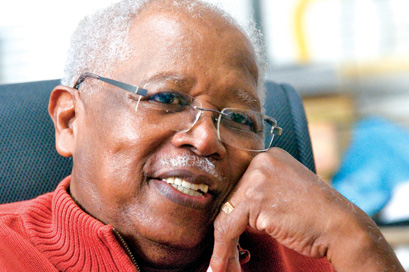 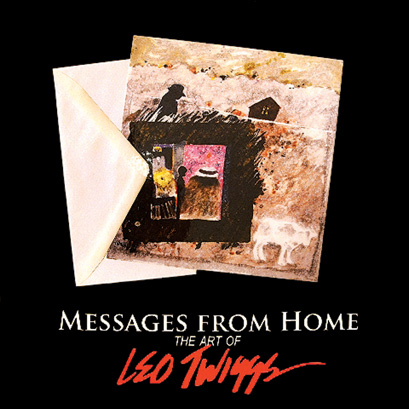 Seated in his Orangeburg studio, Dr. Leo Twiggs' reflections about his artistic career are interrupted by the high-pitched whistle of a nearby train.

Instantly, Twiggs recalls his days as a young projectionist at the only theater in his hometown of St. Stephen.

"I would walk back home late after showing the last movie," Twiggs said. "The train tracks ran right through town.

"When I was in bed, I would hear the New York to Miami express coming through, the same time every night. It would go so fast, all you heard was a moan that dissipated as fast as it appeared."

A celebration of an artistic career that spans more than 40 years, Twiggs' first book, "Messages from Home: The Art of Leo Twiggs," is also the first offering from Claflin University Press. The university will hold a signing by Twiggs for the book's official release at 6:30 p.m. Thursday, Nov. 10, at Ministers Hall on campus.

The 320-page "Messages from Home" contains more than 150 reproductions of Twiggs' paintings. Noted Orangeburg photographer Cecil Williams calls the book "one of the most beautiful I've ever had to put together."

"He is a great artist, and his work speaks for itself," Williams said. "We collaborated to pull it all together after collecting many photos of his works. That in itself was a laborious undertaking.

"As Claflin graduates, we felt this is giving back to the university."

Twiggs, a 1956 Claflin graduate who serves as the distinguished artist-in-residence at the university, studied under the legendary Arthur Rose. He began his teaching career as an art professor at South Carolina State University in the early 1960s, and in 2000 - two years after his retirement - he was named professor emeritus.

Twiggs said he has always toyed with the idea of creating a book about his work, but such plans were put on the back burner during a two-year retrospective of his art that was exhibited at the Georgia Museum of Art and a number of other venues.

"To me, that was one of the best things that happened in my life," Twiggs said. "The Georgia Museum did the catalog of the show that won an award for publication design. I did many book signings for the catalog during the show's run.

"After that show was over, (Williams) said I needed to do the book because, ‘It will change your life.'"

Twiggs' early experiences as a movie projectionist in St. Stephen and later at the old Carolina Theater in Orangeburg while attending Claflin impacted how "Messages from Home" was created. He said films are like turning the pages of a book, in that each page must have some relationship to the next.

Twiggs has received international acclaim for his innovative batik method that he developed through experimentation. He said he organized the book in series, the same way he creates his art.

One such series is in a gatefold format. "Targeted Man" depicts a man semi-covered by a target, with different colors and backdrops meant to provide the viewer with different perceptions.

Twiggs said the series is about growing up with the Ku Klux Klan.

"In ‘Targeted Man,' I tried to show the sinister ambiguity of this period," Twiggs said. "The face is vague - it could be someone you know. It shows you the possibilities when we don't know who or where the horror comes from.

"The book is about my work, but also about putting together a document that flowed. I didn't want a chronological book. It's not an autobiography. I wanted to have people look at the book, read about my life, and then see how those things manifested themselves in the artwork."

"Messages from Home" attempts to connect the human experience to the visual experience. Twiggs said his hope is that succeeding generations can find something of value in the work.

"If they can't, it only means that you have captured a moment, and that passes," Twiggs said. "Even as you age, that value is what makes great art significant.

"All of my work is experimental and time-consuming. What I do is what nobody else is doing or has done. I've made a lot of mistakes, but I have learned to make the mistakes work. That's part of the creative process."

Although Twiggs' book is the first for Claflin University Press, he said it is actually a revival of a Claflin tradition.

Williams said a photo from the 19th century was discovered that shows Claflin students involved in the printing trade.

"It was exhibited in the 1899 Paris Exhibition highlighting black institutions," Williams said. "The exhibit was coordinated by (NAACP founder) W.E.B. Dubois."

Twiggs sees "Messages from Home" as the epitome of his approach to art.

"Ask ‘what if?' That is the most important thing anyone should entertain," Twiggs said. "You shouldn't just accept things as they are. Even if you don't like it, at least you have explored the possibilities.

"I am so proud that (Claflin President) Dr. (Henry) Tisdale had the faith in me to do this. When I told him I wanted to do this publication, to be the first book, he said, ‘That is so generous of you to do that.'

"When I asked if he would get together a committee, he said, ‘No, I trust you because you are a Claflinite and I know you will do our university proud.' That was some big stuff."

Creating a epilogue to his book is where Twiggs experienced the greatest difficulty. That's when a situation from his youth provided the answer.

"After months of thinking about what I can do to end the book and make it plausible, I remembered when things got really tough when I was a kid," Twiggs said. "My mother would walk around the house singing ‘B'lieve I'll Run On (See What the End's Gonna Be),' a traditional African-American spiritual. I simply added that line after the last chapter."

Just like the train, Twiggs said inspiration can come from seemingly mundane occurrences.

"Sometimes when you are working, things just happen, but you have to grasp that," he said. "I think you have to have awareness. That's why I taught art, because I think it heightens one's awareness.

"It is the journey that makes living worthwhile."

Leo Twiggs to be featured at annual S.C. Book Festival

COLUMBIA — Orangeburg author Leo Twiggs will be a featured presenter at the 17th annual S.C. Book Festival that will be held May 17-19 at the …