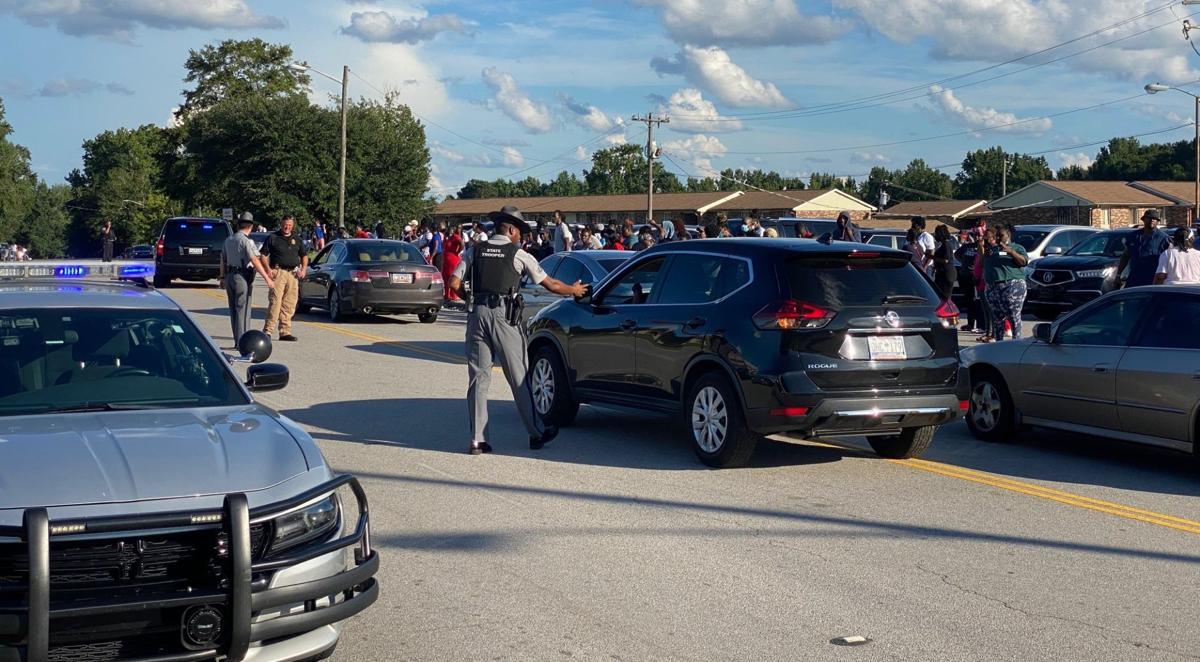 Parents wait outside the Technology Center for students to be released. Students were moved to the site after a shooting incident at Orangeburg-Wilkinson High School. 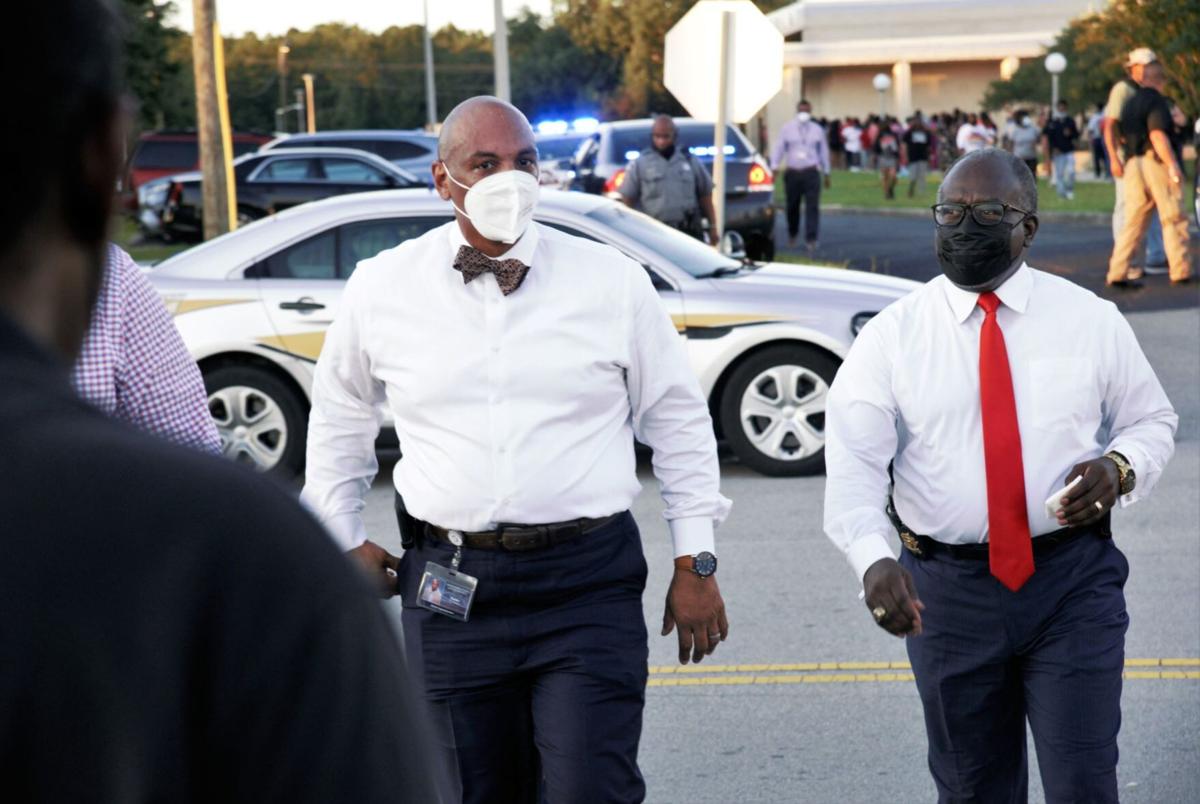 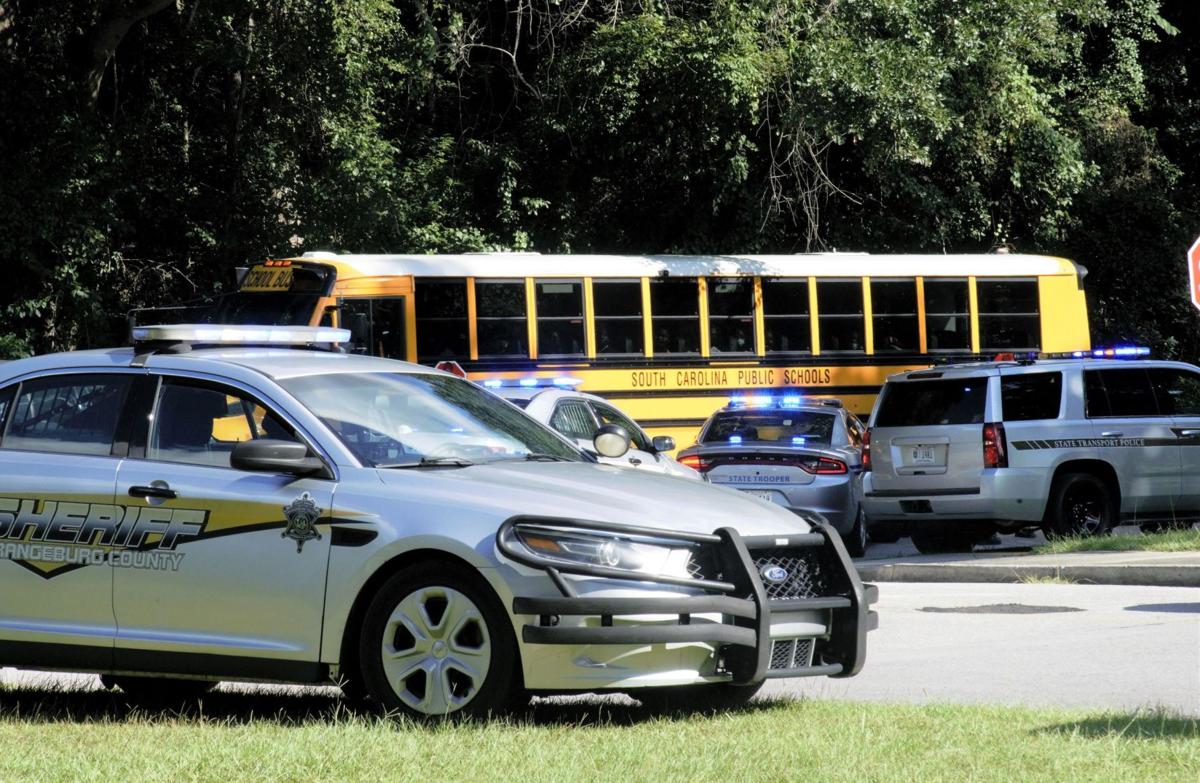 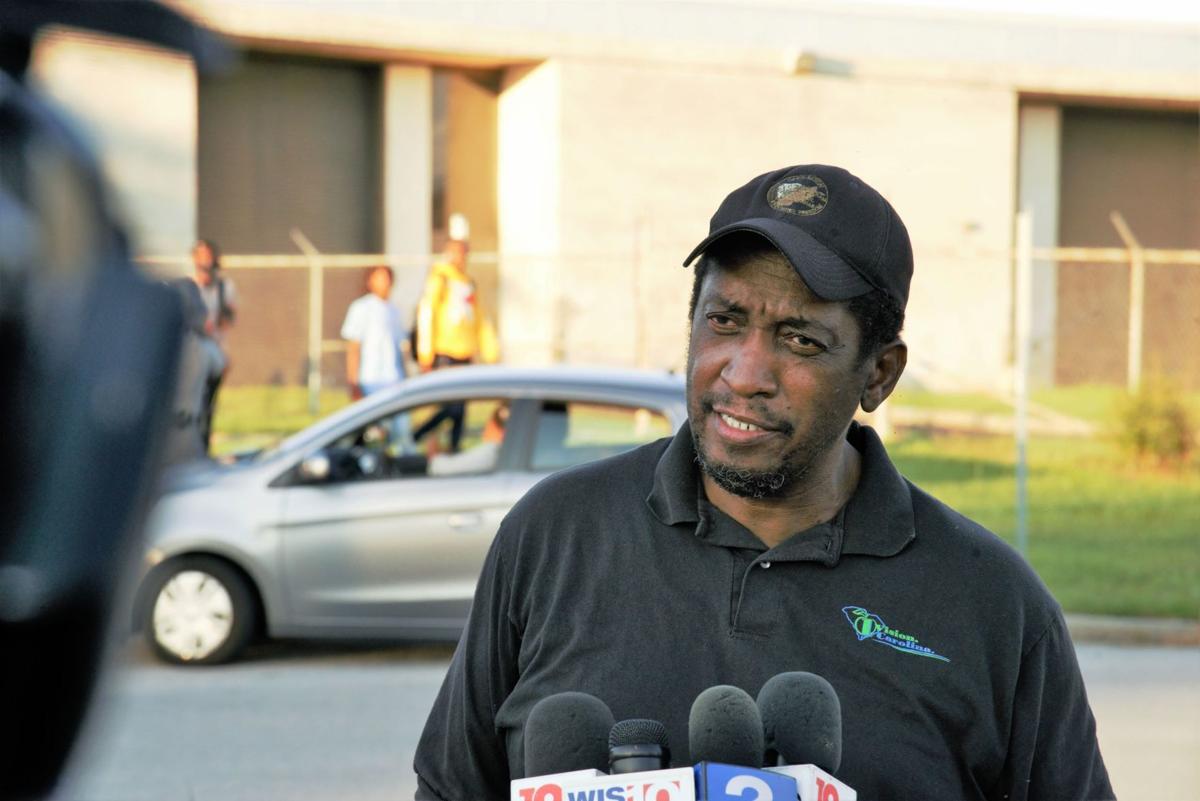 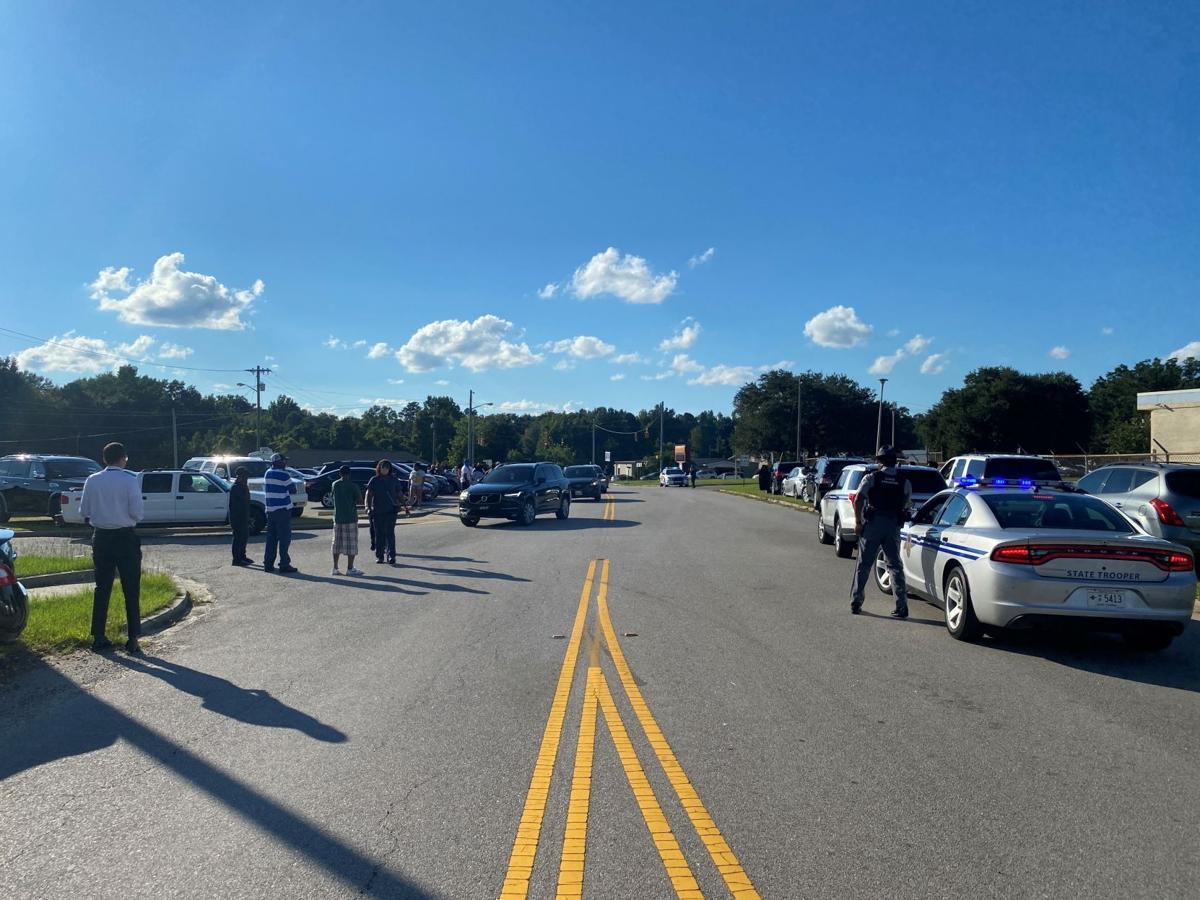 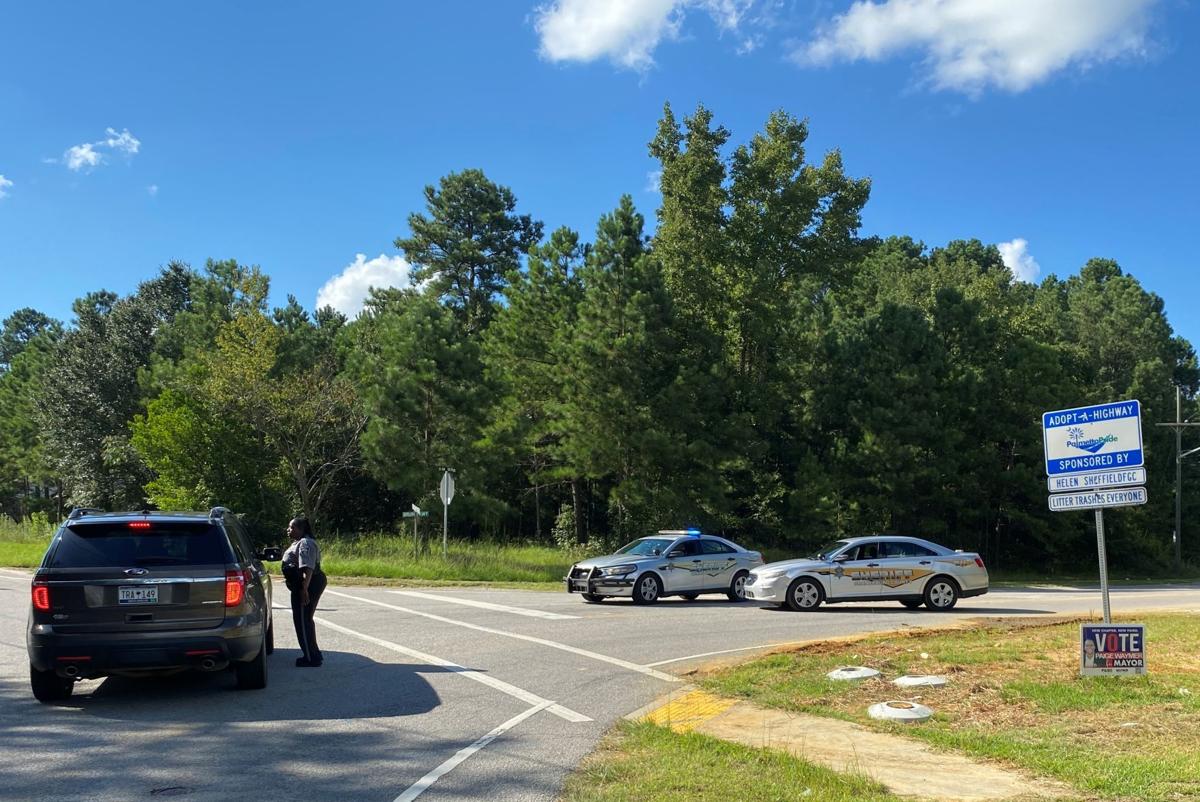 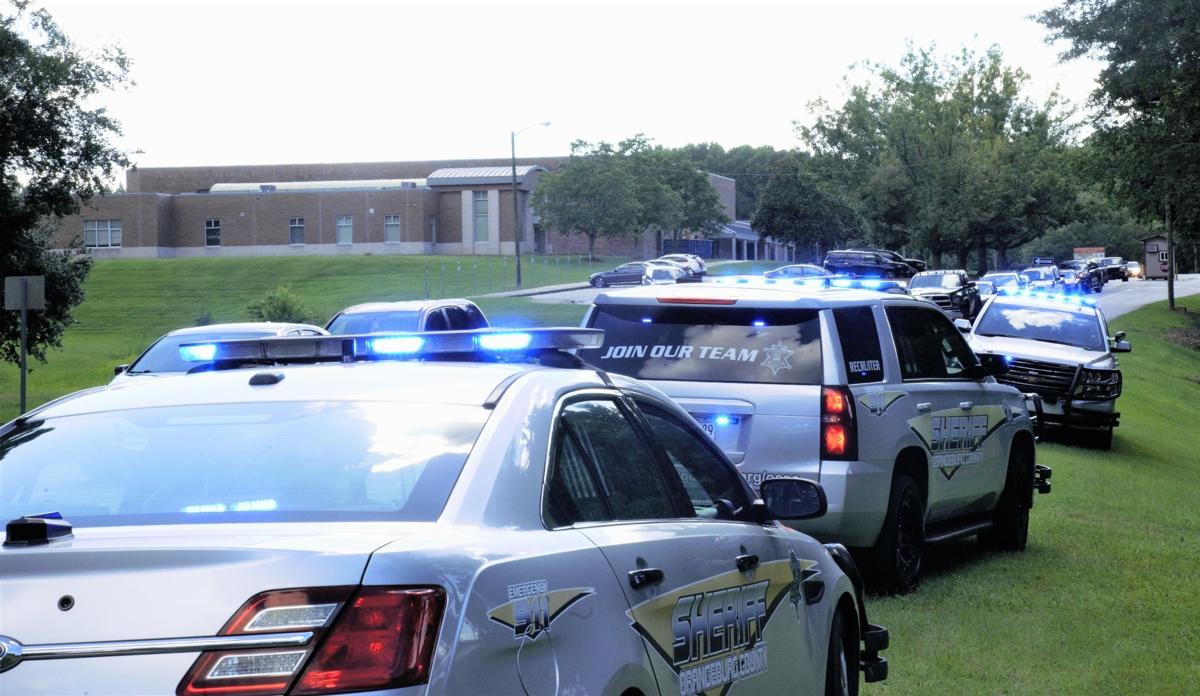 Three Orangeburg-Wilkinson High School students are expected to recover after being shot outside the school Wednesday afternoon.

The students sustained injuries resulting from gunshots fired from a vehicle driving by during afternoon dismissal, according to a post on O-W's website. They were reportedly in stable condition late Wednesday.

“Law enforcement is on the campus of Orangeburg-Wilkinson High School at this time,” the O-W post stated. “All students have been secured inside the school building.”

Later, the Orangeburg County School District said on the O-W website that the injuries to the students do not appear to be life-threatening.

The OCSD statement read: “All students are safe and being accounted for following such a traumatic experience this afternoon. Our community’s continued patience and prayers are requested for all students, especially those who sustained injuries resulting from this afternoon’s tragedy. Additional information will be shared regarding the extent of injuries, which are believed at this time to be non-life threatening.”

And later, the district said: “The three injured students are in stable condition and their families have been contacted directly. Thank you for your continued prayers and patience.”

At a news conference Wednesday evening, Orangeburg County Sheriff Leroy Ravenell said one person is in custody and the investigation into the shooting is ongoing.

Ravenell was joined at the conference by Orangeburg County School Superintendent Dr. Shawn Foster, who thanked O-W’s faculty, staff and students for their efforts during the situation. The district has trained for such incidents, he said.

“We plan for these things hoping we never have to use them,” he said.

Foster said students were cooperative during the incident and “we are extremely thankful for the faculty, staff and students in this community.”

Ravenell also acknowledged the efforts of faculty and staff, saying they “saved lives and prevented other students from being injured.”

Foster and Ravenell did not take questions at their joint press conference.

Later Thursday evening, the district announced that O-W will be closed to students for the remainder of the week, including after-school and athletic practices.

Teachers and staff will report to school as scheduled.

“Throughout the remainder of the week, in-person and remote counseling resources will be made available to Orangeburg-Wilkinson’s students, staff and families as we recover together and heal from such a tragic afternoon,” the district said.

The High School for Health Professions, a nearby charter school, announced Thursday will be a teacher workday.

At the O-W scene shortly after the shooting, Julius Foster tried to walk up to the school’s entrance after his wife was turned away as she tried to pick up their two sons.

As an ambulance left the school with its sirens blaring, Foster said, “There’s an ambulance passing by. I don’t know if that’s my son or not.

“I’m worried about my kids.”

Tiasia Bowman waited outside O-W for her brother, a senior.

“It’s very overwhelming to hear my little brother's at school and the school got shot up,” she said.

“I hope everybody’s OK,” she said.

She learned of the shooting when Facebook “lit up” with notifications that “somebody shot up O-W. Pray for O-W.”

Her brother is OK.

“I hope everybody’s family is OK,” she said.

“This is a tragedy.”

Student drivers were being allowed to leave the school once law enforcement cleared them to do so.

At the Technology Center, James Darby walked quickly toward the facility to pick up his 16-year-old son.

“I spoke with my son briefly and he said he’s OK," Darby said.

His son said Darby didn’t need to come to school, “but as a concerned parent, I have to come up here.

“I want to make sure my son and all involved are safe.”

Jasmine Frazier was waiting in line with her sister to pick up her nephew, a ninth-grader. Her brother-in-law heard he was OK.

The 2018 O-W graduate doesn’t remember anything like this happening when she was there.

Tomekia Griffin talked to her 15-year-old son, who is safe.

She believes the school should have had better security in a time of rising gun violence.

“I feel it’s getting worse with our guns and our kids and our children," she said.

Griffin will see if her son can remain at home now.

“I’m going to see if I can sign him up for virtual,” she said.

Orangeburg County Probate Judge Pandora Jones-Glover walked out of the Technology Center with her son, saying “I’m relieved my children are unharmed.”

Her son is a student at the High School for Health Professions, but was at O-W for basketball.

She said the process of getting her child was a little chaotic, but she understands it was anything but a normal day.

“It’s very unfortunate this occurred on the third day of school. I know my son was excited about getting back to school and learning. It’s just unfortunate someone would risk the safety and lives of our kids when they’re trying to get an education,” she said.

At the news conference, Foster and Ravenell acknowledged how long it took for the district to reconnect parents with their children throughout the afternoon.

“Our goal here, and I know it takes a long time, is to make sure we’re able to deliver every single parent to their child,” Foster said.

Others reacted to the shootings.

“I am saddened by it,” Orangeburg County Council Chairman Johnnie Wright said. “I am saddened something like that would happen, especially since we are concerned about our children getting back to school with the coronavirus and all. It is senseless.”

Wright offered his prayers for those injured and their families.

Orangeburg Rep. Jerry Govan, who is an O-W graduate and in whose district the school is located, was on campus after the shooting.

“This concerns us all because we all live in the community,” Govan told WLTX-TV.

Govan said he is confident law enforcement and the school district will do their due diligence in the matter.

“We have competent people in place to keep our children safe,” he said. “I am quite sure the district and the school leadership, the superintendent and the board will look at security measures to see if they can beef that up. We have to address these things.”

Govan said about seven years ago in the S.C. House a study was done addressing violence in schools.

“You can’t turn campuses into fortresses but we each can do our part,” Govan said.

Gene Crider is an Orangeburg native. He has been reporting since 1992. Please contact him with story ideas at gcrider@timesanddemocrat.com or 803-533-5570.

An Orangeburg County jury has found a man guilty of murdering a person following a game of dice, according to 1st Circuit Solicitor David Pascoe.

The gunshots at Orangeburg-Wilkinson that injured three on Wednesday did not come from a passing vehicle, Orangeburg Count Sheriff Leroy Raven…

A 14-year-old male is facing multiple charges in the wake of Wednesday’s shooting at Orangeburg-Wilkinson High School. Three students were injured.

What to Know About Omicron

Parents wait outside the Technology Center for students to be released. Students were moved to the site after a shooting incident at Orangeburg-Wilkinson High School.