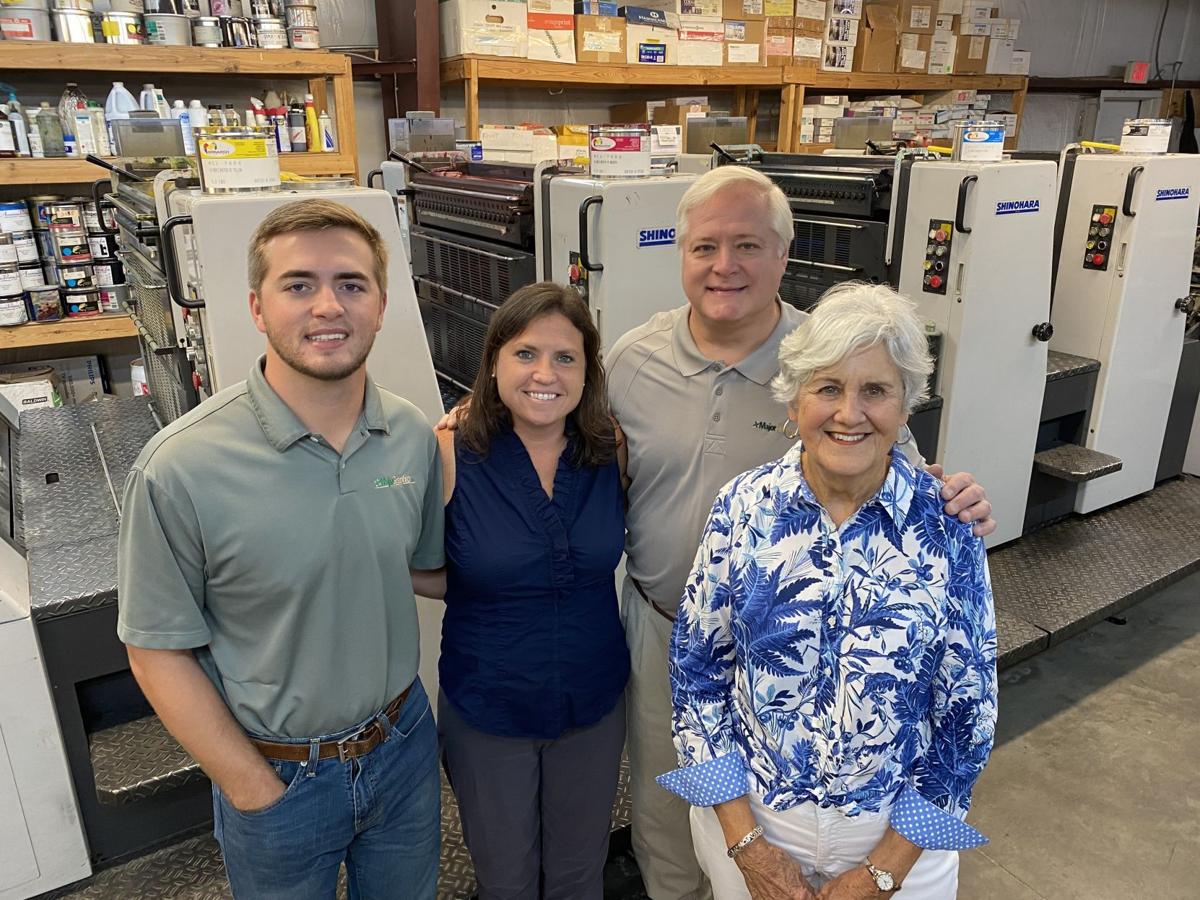 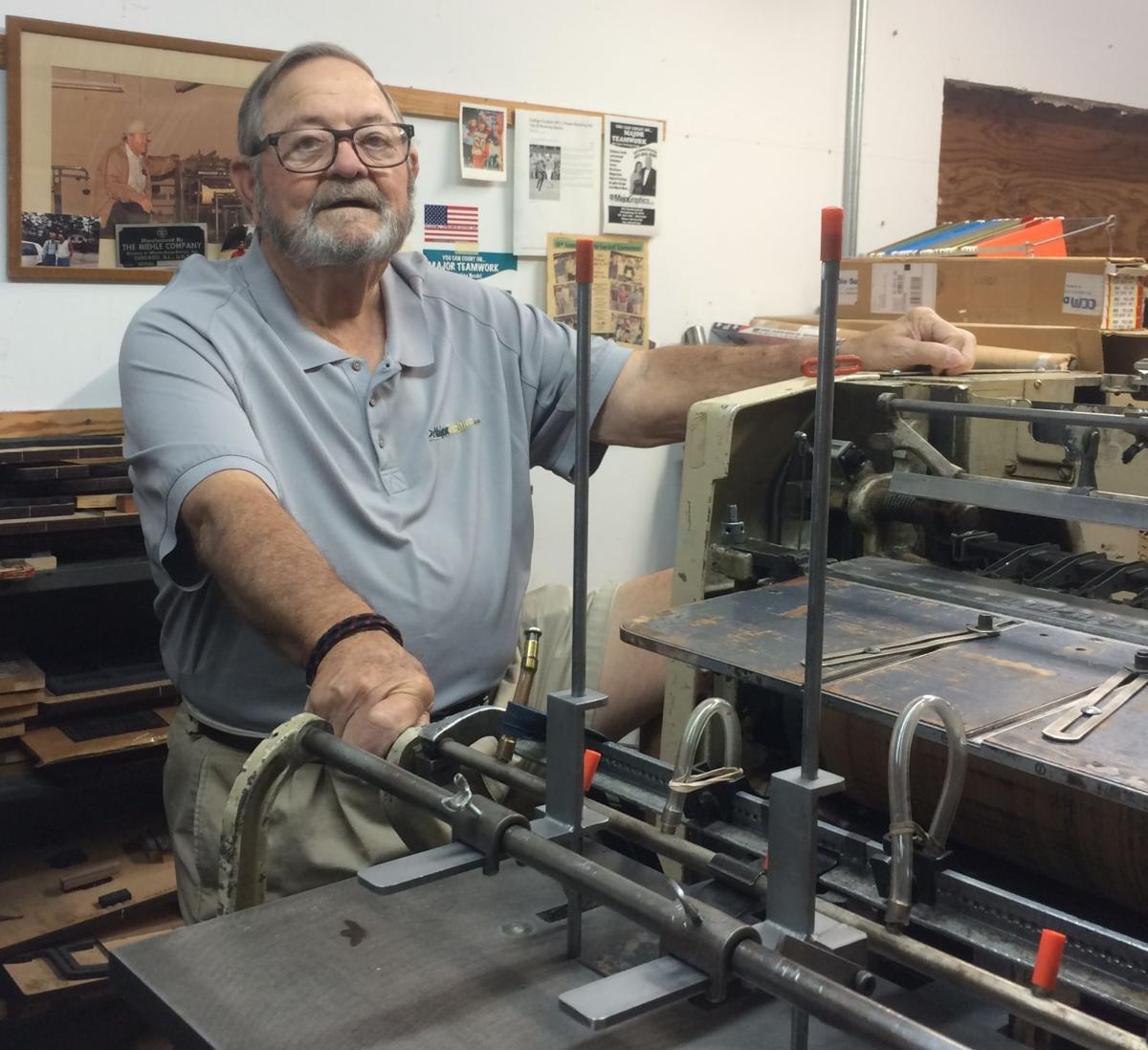 W. Larry Reynolds Sr. at Major Graphics LLC in Orangeburg. Reynolds was the second generation in the printing business. He still works in a part-time role with Major Graphics.

Two Orangeburg County printing businesses with a combined 150 years of history have become one.

Orangeburg's Major Graphics LLC has purchased the book of business or customer list, as well as existing equipment and inventory, from Rowesville's Bonnett Printing LLC.

The agreement between the two businesses was completed Sept. 2.

The purchase combines two companies with a long history of providing printing services to Orangeburg and surrounding areas. Bonnett Printing was founded in 1933 and Major Graphics has it roots going back into the late 1950s.

The closure of Bonnett Printing's Rowesville office on River Street means Major Graphics has added over 1,000 customers to its business portfolio. Major Graphics is located at 2827 Bamberg Road in Orangeburg.

"We wanted to do this deal because of Bonnett's book of business being such an established book," Major Graphics owner Billy Reynolds Jr. said. "They have been down there for four generations. They have quite a book of business with a loyal, loyal customer base."

"We were proud to be able to obtain that ... and continue to serve those customers," Reynolds said, noting Major Graphics will provide "the same quality" of service as Bonnett. "It means the world to us to have that and to continue to call on and carry on the printing tradition that Bonnett established many many years ago."

Deborah Bonnett, and her late husband Arthur, retired in 2015 and at the time sold both A.L Bonnett and Son Printers and Bonnett Lithographics. Bonnett said due to a recent contractual issue with the new owner, all the assets of the company came back to her.

"I didn't want these customers to just fly away and I thought Major Graphics would be the company to have my customers," Bonnett said. "I have been trying to make contact with them and let them know that Billy Reynolds and Jeanna with Major Graphics were the ones that would take care of them and provide them the quality of service and printing that Arthur and I gave to our customers."

Bonnett continues to serve as a consultant in Major Graphics, but she says she misses her River Drive business.

"It has been a lifelong printing business," Bonnett said in addressing the closure. "It is bittersweet. It really is."

Bonnett said what helped sustain the printing company so long was its loyal customer base, and especially the smaller customers.

"It is great to have these contract customers and these big customers, but it is these smaller businesses that are repeat customers that keeps you going," she said.

After the addition of Bonnett customers, Major Graphics is looking to expand both in building space and in the number of employees Currently, the business occupies a 5,000-square-foot building and employs 10.

"We have plans to possibly move," Reynolds said. "We are looking at some larger locations. At some point we will have to add some more manufacturing space. Our goal is to be in the City of Orangeburg."

Billy says the goal is to have a new location within a year.

Major Graphics is a full-service, "one stop" printing company. The business does everything in-house with a full press room; digital and offset typing; a bindery; a wide format room and apparel.

From business cards to a 1,500 T-shirt order, the business handles all printing needs.

"We can provide you ink on anything," Billy said.

As with many businesses, COVID has had an impact.

From March to May 2020, business was down but picked up until December of last year. Since June 2021, business has rebounded.

The Nov. 13 closure of the North Road OfficeMax could also mean an uptick in business, Reynolds said.

"That will definitely help us," he said.

"There is still a press there that he (Bonnett Sr.) bought," Deborah said. "It was the first automated press in Orangeburg County. I was told they delivered it on the train. It stopped there and they somehow got it down to the printing office."

Deborah said she and her husband ended up taking over the business. She recalled how the couple lived close to the business while she taught school and stayed home raising children.

"When they were in school, I worked in the printing business and then it just got where I was there every day," Deborah said. "I enjoyed it. It was something different."

There were a lot of changes over the years in the printing business.

The biggest was typesetting.

"We had something called a linotype and it was this big machine," Deborah said. "There were many nights that Arthur was setting a job and he would come home and wake me up and said would you proof this before cutting the machine off."

Deborah said then Compugraphic arrived and then computers.

"There were times when I wanted to take the computer and take it to the Edisto River and throw it in," Deborah said. "But I love how it has progressed. I love it."

Major Graphics was born in the 1950s and early 1960s when Donald S. Reynolds Sr. owned and operated the Rock Hill Press.

His son, W. Larry Reynolds, followed in his father's footsteps and opened Art Printing Company in Rock Hill in 1965.

In 1977, Larry Reynolds sold the business to the Rock Hill Evening Herald, but stayed on and ran the newspaper for the new owner for a number of years.

But then a business opportunity opened up in Orangeburg for Larry.

Major was tragically killed in a vehicle crash in 1982 and his widow offered Larry the business to purchase.

Larry bought Quality Printing in the fall of 1982 and owned and operated the business until November 2005.

In 2005 due to difficult economic times, Major Printing closed, prompting Billy, Larry's son, to ask, "What am I going to do now?"

"This was my life and all I have ever done," Billy said.

In 2005, Billy opened up Major Graphics. The business will enter its 16th year of existence in December.

Today, Larry and his wife, Pam, still work at the business part-time. The acquisition of Bonnett's means Major Graphics has about 325 years of printing experience with most of its employees having worked in the industry for decades.

The future for Major Graphics also looks bright as there is another Reynolds in the wings.

Billy's 25-year old son, William, who currently works in sales at Major Graphics, says he has no plans to leave.

"That is my long-term goal to stay in this business and keep building our customer base and diversify and find different ways to sell great product," William said.

A 21-year-old woman is accused of stabbing her mother in Orangeburg.

A 41-year-old Orangeburg man is accused of shooting another man in a dispute.

WHO designates new COVID strain Omicron as ‘variant of concern’

W. Larry Reynolds Sr. at Major Graphics LLC in Orangeburg. Reynolds was the second generation in the printing business. He still works in a part-time role with Major Graphics.