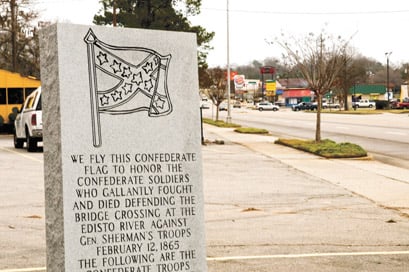 Members of the Sons of Confederate Veterans Rivers Bridge Camp 842 have been concerned that proposed changes to the U.S. 301-Russell Street intersection will harm the Confederate monument nearby. 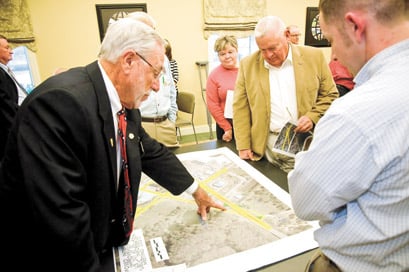 The $1 million project would run a drainage pipe straight through the SCV’s memorial site, he said. The site has a historical marker noting it is where Orangeburg Confederate soldiers fought against Union Gen. William Sherman’s troops during the Civil War.

“We just want to honor the soldiers who have fought here when Sherman came through,” Boineau said. “He came right across this river here.”

Boineau was joined by approximately 100 other SCV members throughout the region last week at the Orangeburg County Chamber of Commerce, where they voiced their concerns about the project. SCDOT held a public meeting about the project.

Under SCDOT’s proposal, Russell Street will be shifted so that it meets U.S. 301 at a 90-degree angle. Also, a stop sign will be added.

Currently, there is no lane to help drivers merge onto U.S. 301 from Russell Street, which can lead drivers to make sudden stops, SCDOT Program Manager Kevin Gantt said.

“Because of the angle of the approach, the cars would come in and people would be looking back to see if they could merge in,” Gantt said. “You have a few cars up here already stopped and of course that creates the rear-end accident.”

Boineau says while that is important, the project’s drainage will directly impact the SCV memorial.

“As long as we can come to an agreement with our monument and our flag and as long as it is a visible place with all the camps in agreement, I see no problem in this being resolved,” Boineau said. “We will negotiate. It won’t be overnight, but there is no need for anybody to get upset about anything as long as there is a place where we can meet in the middle.”

The property was deeded to the SCV for the monument about a decade ago by Maurice Bessinger, owner of the Piggie Park Enterprises barbecue restaurant across the street. The memorial occupies about 120 square feet.

SCDOT officials say the improvements were designed with the help of crash analysis and traffic studies utilizing advanced technology.

“Instead of spending $1 million and they don’t know whether it will work any different or not, temporarily close off that end of Russell Street at the light and try to see how it works,” he said.

Also as part of the project, the car capacity of the left-hand turn lane from U.S. 301 onto Russell Street will be extended to accommodate at least four more vehicles.

The project will also create a larger drive into the Edisto Memorial Gardens, allowing for left-turn access from U.S. 301 into the park.

Vice President of Piggie Park Enterprises Lloyd Bessinger said the plans would pretty much put his Orangeburg barbecue restaurant out of business. The sidewalk will go through a portion of the restaurant. The restaurant has been at the site for about 20 years, although it has closed at times only to later reopen.

“I will lose my restaurant,” he said. Bessinger said business has been good at the location and “I don’t know what I am going to be able to do. We would like to see it stay open.”

Bessinger said he has not been adequately informed as to what kind of compensation the state would provide.

“My question is: Why don’t they put a light down there at the intersection rather than making that cut through our property?” Bessinger said. “It seems to be like that would be the easiest thing to do and would be cheaper. It would save money for the highway department and taxpayers.”

Gantt said when the right-of-way process begins, SCDOT will speak with property owners about a possible compromise.

SCDOT has informed the city that two trees could be impacted by the project. They can either be relocated or two new trees can be planted nearby, the department says.

Cost was one issue that was also brought up several times as a concern.

Gantt said SCDOT looked at other options, such as closing off the lower portion of Russell. That would send traffic onto Riverside Drive by the Orangeburg Veterans Memorial.

“The problem with that is that if we turn people into this existing intersection, it fails because there is too much traffic coming through here,” Gantt said.

There is only one lane and the radius coming off of Russell Street onto Riverside Drive is not large enough, he said. “We would actually have to increase this ... and we would need two lanes in each direction and all of this would have to be reconfigured.

“It would need a new roadway.”

Gantt says that would cost more than $2 million.

The comment period will end March 9. SCDOT will review the comments and incorporate them into an alternative evaluation where applicable. A formal response to the comments will not be provided.

Madagascar drought: More than one million edged towards famine

Madagascar drought: More than one million edged towards famine

Members of the Sons of Confederate Veterans Rivers Bridge Camp 842 have been concerned that proposed changes to the U.S. 301-Russell Street intersection will harm the Confederate monument nearby.