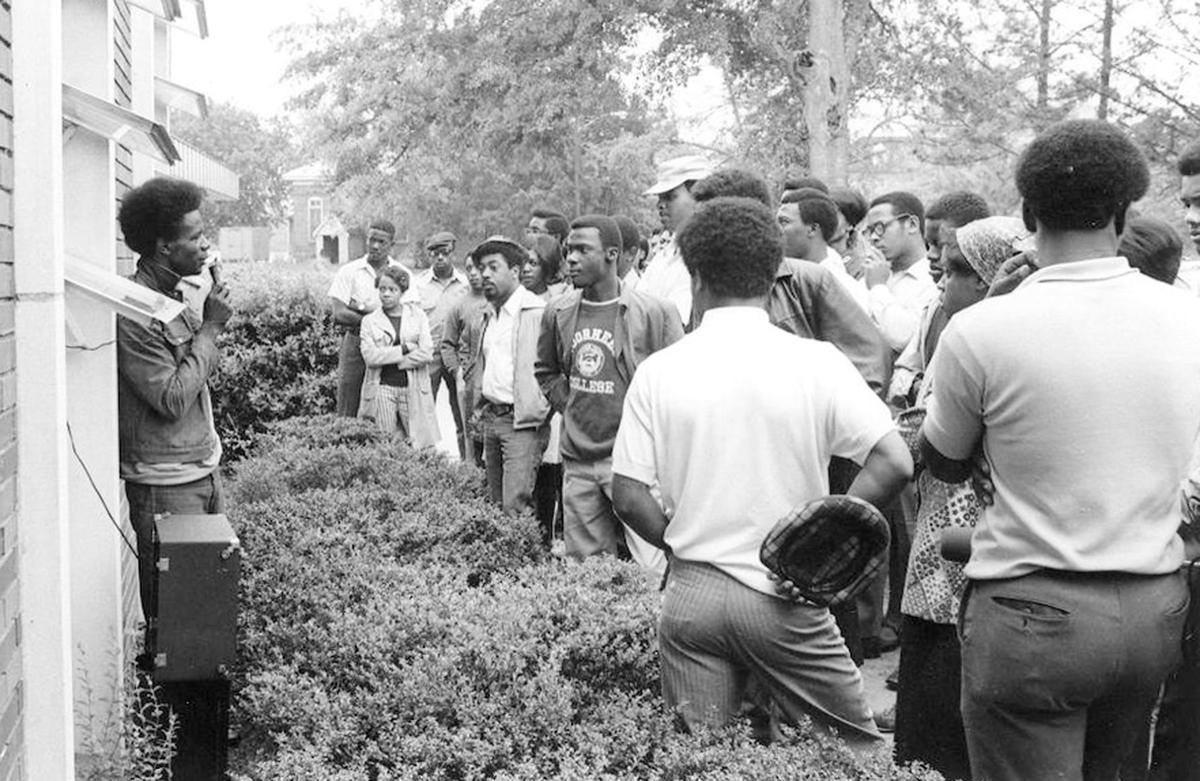 A group of armed students took over the Voorhees College Administration Building on April 28, 1969, at the height of the Civil Rights Movement. The action was a dangerous one, coming a little less than a year after three people were killed on the campus of South Carolina State University during civil unrest there. Voorhees students are shown here in front of Wilkinson Hall. 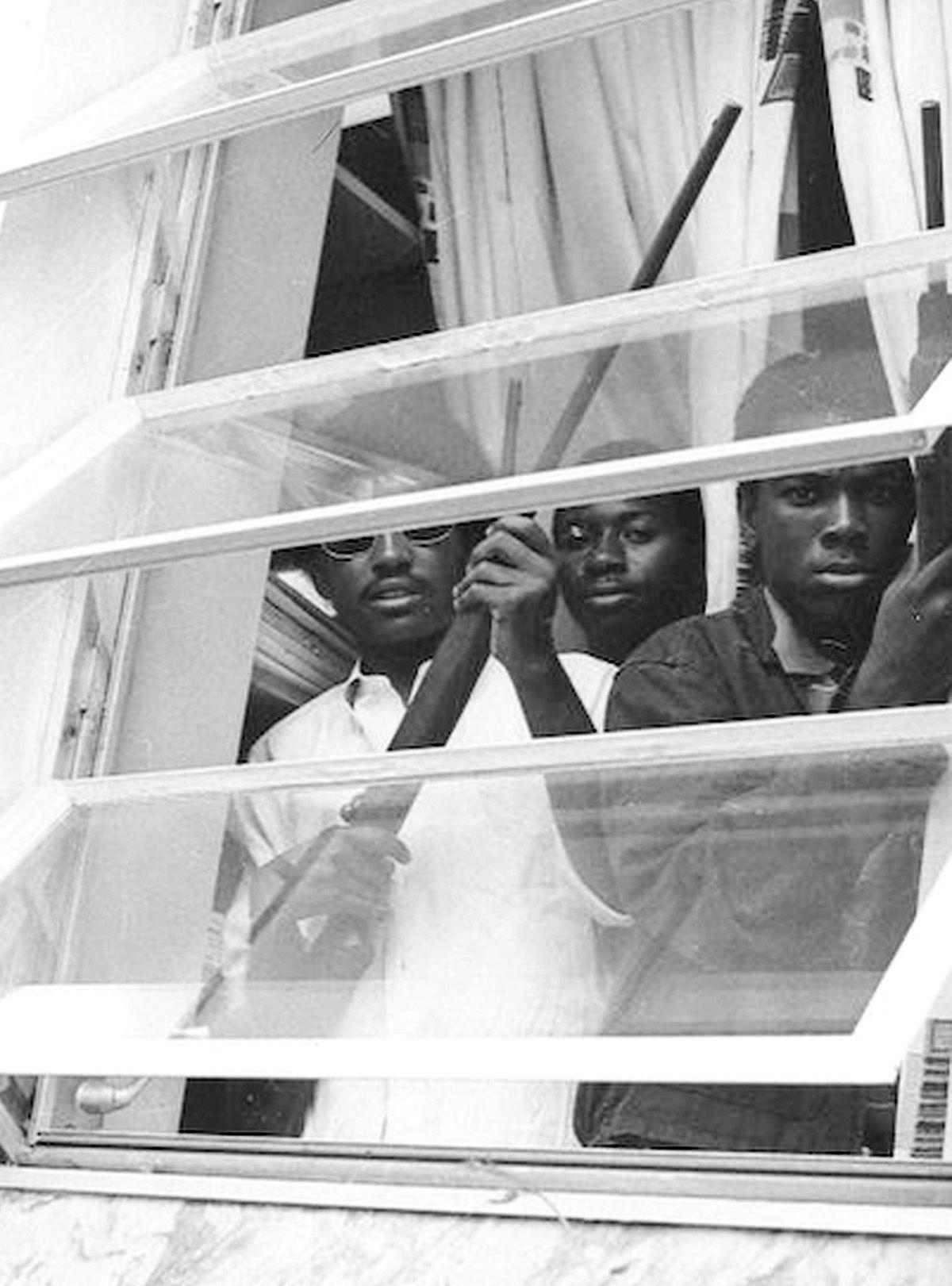 An armed member of the Black Awareness Coordinating Committee peers from a window of Wilkinson Hall after the group took over the Voorhees College administration building in April 1969.

By RICHARD REID Special to The T&D

An event of major significance occurred on the campus of Voorhees College in Denmark at the height of the Civil Rights Movement.

On April 28, 1969 -- a little less than a year after three unarmed students were killed at South Carolina State University (Feb. 8, 1968), shocking America and the world -- a group of Voorhees students took their frustrations to another level, taking over the administration building with guns instead of books.

The unprecedented action of the students was among the boldest and potentially deadliest strategies to bring about change during the civil rights unrest of that period.

Why such a drastic decision? Oliver Francis, one of the participants in the confrontation at Voorhees, said, “We knew what happened to the students at South Carolina State and that we weren’t going to let the same thing happen to us without some protection. We didn’t plan to hurt anyone.”

At the time of the takeover, Voorhees College President John Potts was away from the campus. He was alerted by a note saying, “Black power students have taken over the library and office … students have guns … alerted police ... wanted to avoid any real confrontation.”

Throughout the incident, Potts and Board Chairman J. Kenneth Morris had major disagreements about how to settle the student conflict and continue operating the school. Both of them were concerned about maintaining the support of the Episcopal Church and private donors. At times, the negotiations and wrangling became quite contentious. Neither Potts nor Morris wanted to see another Orangeburg and agreed not to “give in.” For the most part, a disaster was avoided.

When the students departed Wilkinson Hall on April 29, 1969, they walked to the home of Potts, who informed them that they had committed a civil offense against the state and that it was out of his hands. He urged them to obey the commands of J.P. Strom, chief of the State Law Enforcement Division. The students listened to Potts and did as he recommended.

"Strickland said Dr. John F. Potts, president of the college, and aides were meeting with the students to try to reach agreement. The sheriff said he had no reports on the number of students involved in the takeover. A student inside the building said he counted 31 students. The Episcopal-supported institution has an enrollment of 725.

"The students occupied the administration building, which also houses the business office and library, at 12:15 p.m. after escorting faculty, staff and (other) students outside. One student, who refused to identify himself, said the takeover was led by members of the Black Awareness Coordinating Committee. He also said the students were armed for the purpose of self-defense.

"The students are demanding that the wages of the non-academic workers, such as cooks and janitors, be raised to $1.65 an hour. Such employees are now making $1.30 an hour.

"Other demands on the list presented to Potts were:

On May 1, 1969, the Bamberg Herald reported: "Voorhees Students Arrested As Officers Move in on Barricade, Demands Made" — “Armed students who seized two buildings at Voorhees College in Denmark surrendered peaceful Tuesday when National Guard troops and State Highway Patrolmen moved onto the campus.

"Twenty-four students -- 19 men and 5 women (including two non-students) -- were arrested after filing to the home of Dr. John F. Potts, president of the institution. The students were taken to the Bamberg County Jail and charged with unlawful assembly and riot and later transferred to the Department of Corrections in Columbia.

"After the governor (Robert McNair) declared a state of emergency existed at the Denmark school about 3 p.m., events moved swiftly. By 4:30 p.m., troops had sealed off the campus. Barely 10 minutes later, they had moved in behind the administration building (Wilkinson Hall). A short time later, the students were arrested and by 6 p.m., the governor had rescinded his state of emergency order."

According to the newspaper account, Potts, who said he had no knowledge the troops were coming, noted the administration had reached agreement with the dissident group before the arrival of the National Guard. As the troops began moving into the campus area, a faculty member, D.J. Dingle, led the group from the building toward the president’s home. Seeing the troops, Dingle shouted, “Get those racist troopers off this campus,” it was reported.

After the students entered the president’s home, SLED Chief Strom was reported to have said, “They violated the laws of the state, and I have to help uphold the laws.”

According to the newspaper accounts, the students filed quietly from the brick home. They were searched by SLED agents and loaded onto a bus and taken to Bamberg. After boarding the bus, they began singing.

Potts, who said he had signed a request late Monday night asking the governor for assistance, said he did not want the National Guard on the campus, according to the reports.

Potts said the administration and the dissidents had reached “total agreement” before the National Guard moved in. He said the faculty had voted to grant amnesty to the students involved, and it was with this promise that the students decided to release their hold on the building, it was reported.

According to the newspaper, Potts said, “It is not within our power to grant them (the students) amnesty from a civil point of view, but the college will not press charges against them. I think we were on our way to solving our problems without civil assistance. We had made so much progress."

Potts said the administration had agreed to some of the demands, it was reported.

According to the accounts, weapons found by the officers included six rifles, three 12 gauge shotguns, two pistols, three knives and a quantity of ammunition.

Potts closed the school that Tuesday, and the students went to their homes. The school reopened on May 12.

Two of the students filed for and were granted pardons by the state. They were Samuel Mintz in 1980 and Oliver Francis in 1986.

The remainder of the seven students were found guilty in July 1970. Their convictions were later unsuccessfully appealed. It was concluded that this group, along with other Voorhees College students, “took over the library-administration building by the use of guns."

For their roles in participating in the potentially volatile situation, they paid a great price that, in some ways, has continued to affect their lives some 47 years later. One of them has become a bishop in the church while another has earned the title of “the town's drunk.”

Today, the incident at Voorhees College is not well known and generally not talked about at the college, in books, articles nor black history classes. Blacks in South Carolina, Bamberg County and at Voorhees chose not to relive, acknowledge nor speak about the historical incident that caught the attention of every major newspaper, radio and television network in America. Some describe this attitude as “letting a sleeping dog sleep."

But, history must be kept alive ... lest we forget.

Richard Reid is president of the Orangeburg Historical and Genealogical Society. His mission is researching Orangeburg history, with a particular emphasis on the role of African-Americans in that history. Information for this story is from Voorhees College Archives, The Times and Democrat and The Bamberg Herald.

Watch as sheep take over the streets of Madrid

Watch as sheep take over the streets of Madrid

A group of armed students took over the Voorhees College Administration Building on April 28, 1969, at the height of the Civil Rights Movement. The action was a dangerous one, coming a little less than a year after three people were killed on the campus of South Carolina State University during civil unrest there. Voorhees students are shown here in front of Wilkinson Hall.

An armed member of the Black Awareness Coordinating Committee peers from a window of Wilkinson Hall after the group took over the Voorhees College administration building in April 1969.