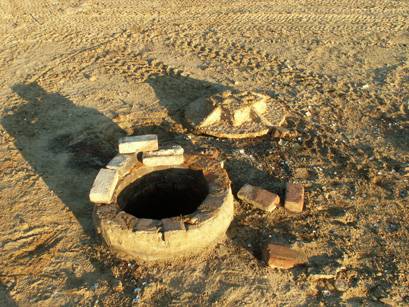 A manhole at the end of the line still has the iron cover propped up beside it. (T&D CORRESPONDENT JOHN RHENEY) 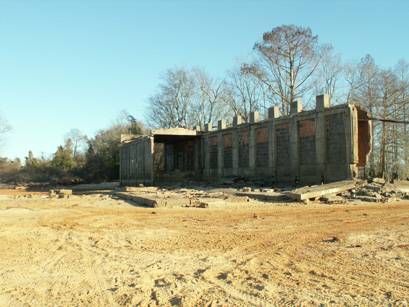 Only part of one dry kiln is left, but its towering presence bespeaks what must have been a well-organized system when the others were in place in the town of Ferguson. 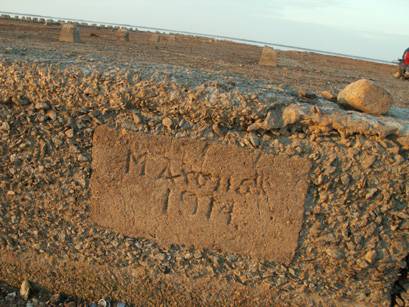 In 1910 Francis Beidler formed the Santee River Cypress Lumber Co. at Ferguson. The construction began and many of the exposed concrete walls bear inscriptions that still are easy to read. (T&D CORRESPONDENT/JOHN RHENEY)

This article was originally published on May 31, 2017.

I have always been fascinated by the flooded town of Ferguson, which lies under the waters of Lake Marion just a few miles from Eutawville. I can find very little written about the site, but I know a little about its history.

Being below the high-water mark of Lake Marion, the site is now controlled by the Santee Cooper Public Service Authority. The retreating waters of Lake Marion have given this generation a rare view of a town closed down almost 100 years ago and then covered with water in the 1930s. I ventured out into the lake bed recently to walk the ruins of Ferguson and to imagine what might have been at one time.

Of course the original inhabitants of the island we know as Ferguson were the Congaree Indian tribe. They lived peacefully on the site in circular villages with a large central fire. They ate the abundant plants of the Santee floodplain and ventured into the swamps to take game. Their huts were thatched roof structures, which often had open sides. Many times these villages were on the eastern and southern sides of islands and outcroppings. The Congaree enjoyed having the sunrise in their entrances every morning and the southern and eastern exposures quickly warmed their homes in the cooler months. It is so at Ferguson. Most all of the pottery that I saw was on the southeastern banks of the island. When Hernando DeSoto explored the Santee River in the early 1600s, he found about 800 Congaree Indians living in its flood plain. By 1700 the colonists had infected the tribe with smallpox, which killed many of their number. Fed up with the white man's claim to their land, the Congaree joined other tribes in the 1715 Yemassee War. They lost and half of their tribe was captured and enslaved. The rest ran south to Florida to escape the settlers. Soon afterward, the Congaree tribe was extinct.

When I pick up a piece of pottery (and very quickly put it back in place so as not to have the full wrath of the state of South Carolina to come down on me like a bolt of lightning) I think of the last person who might have touched it. Was it 300 or 3,000 years ago?

The area around Ferguson lay mostly neglected except by local settlers until about 1895. Logging became very profitable in the south toward the end of the 1800s. The forests in the North had pretty much been cut out and the industrialists looked to the South for the nation's unquenchable thirst for timber. By 1905 Francis Beidler of Chicago owned much of the Santee River swamp and flood plain. In 1910 he formed the Santee River Cypress Lumber Co. and incorporated the 15,000 acres around what we now call Ferguson as the base of this operation. The construction began. Today, many of the exposed concrete walls bear inscriptions that still are easy to read pronouncing dates like March 15, 1914 and Jan. 9, 1911. The little island became a boomtown and was one of the first to have indoor plumbing and gas lighting in the streets along the rows of workers' cottages. A large sewer and raw water system still transverses the island under the foundations. The piers that supported the water tower are still very much intact. The road that runs from Highway 45 to Ferguson landing is the old railway bed for trains that brought supplies and workers into the mill and three hotels on the island.

The sawmill was massive and 4 acres of pier foundations still sit in orderly rows dissected by huge underground pipes that funneled sawdust and wastewater off the floors and back into the swamp. There is only part of one dry kiln left, but its towering presence bespeaks what must have been a well-organized system when the others were in place. Only the wave-resistant fireboxes remain from those others. As I walked past these structures, my mind pieced together images of what an ordinary workday must have looked like during a time where manpower still made up the massive effort that it would have taken to move the huge cypress trees out of the swamp and first into the saw mills, then to the kilns, and finally onto the rail cars.

My vision of the past is occasionally broken by the new white signs placed to warn me not to drive a four-wheeler on the lake bed or pick up any pieces of bricks, nails or broken glass. These treasures are under the protection of the SCPSA. The mill is on the north end of the island. As you walk down toward the southern shore, Indian pottery becomes much more prevalent, as might be expected. At the far end of the island are a series of foundations where a substantial cottage used to be. This is the end of the island where the wastewater system empties into the lake.

There is a manhole at the end of the line with the iron cover still propped up beside it. There are many fragments of broken dispensary and bitters bottles. Apparently the guys who were marooned to watch this southern outpost were either drunks or sickly.

The cypress trees were girded while standing to allow them to die and dry out before they were cut and taken from the swamps. It was found that when the logs were dropped in the wetter areas, they rehydrated themselves by absorbing water and sank to the bottom when moved across ponds and creeks.

Logging was halted in 1915 at Ferguson. As an aside, it is said that Mr. Beidler was growing blind and that as he was told he was losing money, he began to believe that the managers in South Carolina were taking advantage of his malady. In any event he closed the Santee River Cypress Lumber Co. soon after. Records show that at his death in 1924, the company owed him about $621,000 that he had loaned the company from his personal accounts to keep it afloat. The assets of the company were about worth $1,632,000 at the time and the state of South Carolina immediately taxed his heirs for estate tax. The family sued, saying they lived in Illinois and this was double taxation, but they were eventually forced to pay in order to settle matters here in South Carolina.

Sunday was a beautiful sunset. As I walked through the debris field of the century-old town of Ferguson, I thought back to the people who first migrated to this area, later settled it and then tamed the wilds of the Santee River swamp. The trash strewn across the landscape tells a story of hardworking people who were part of giving this area another start after the devastation of the Reconstruction period following the Civil War. When I look at the chips of pottery and the scratched signatures in the concrete walls, I try to imagine the people who left their mark. Surely, making pots or doodling in concrete were very insignificant moments in a mundane day for these people. When the waters of Lake Marion cover the site again, they will be forgotten until the next drought 50 or 100 years from now. Then they will be remembered again, long after I am forgotten. Not a bad legacy to have.

Dr. John Rheney has been writing his outdoors column for The Times and Democrat for 25 years.

Claflin University is planning this year to launch a graduate nursing program and a climate change focus for its graduate biotechnology program.

Land is being cleared on John C. Calhoun Drive for the future development of a restaurant, but the property owner says he is not sure what typ…

Bamberg County's largest employer is closing its doors after 57 years of manufacturing operations.

The S.C. Department of Revenue has released the names of the state's top delinquent individual and business taxpayers, including those from Or…

Construction will begin on three major road projects in 2021 within the City of Orangeburg, according to the S.C. Department of Transportation.

The streets leading into Orangeburg will be brighter after the county’s lighting project is complete.

A 26-year-old Orangeburg woman won’t serve any jail time for assaulting an officer.

The person discovered in a Roosevelt Gardens apartment is a 23-year-old woman, her mother says.

A manhole at the end of the line still has the iron cover propped up beside it. (T&D CORRESPONDENT JOHN RHENEY)

Only part of one dry kiln is left, but its towering presence bespeaks what must have been a well-organized system when the others were in place in the town of Ferguson.

In 1910 Francis Beidler formed the Santee River Cypress Lumber Co. at Ferguson. The construction began and many of the exposed concrete walls bear inscriptions that still are easy to read. (T&D CORRESPONDENT/JOHN RHENEY)
© Copyright 2020 The Times and Democrat, 1010 Broughton Street Orangeburg, SC | Terms of Use | Privacy Policy
Powered by BLOX Content Management System from TownNews.com.
You don't have any notifications.