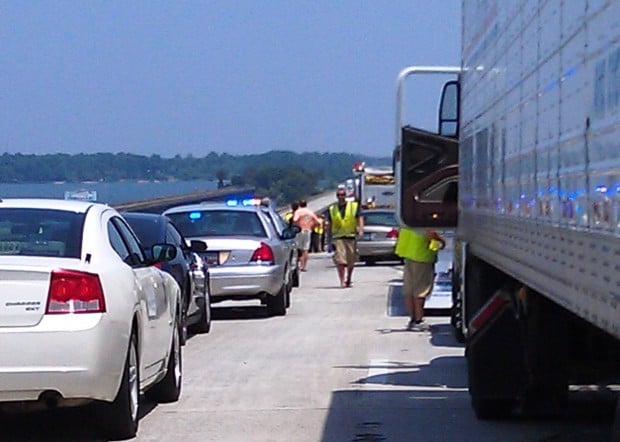 I-95 traffic was at a standstill following a fatal collision on the bridge over Lake Marion in August 2011. 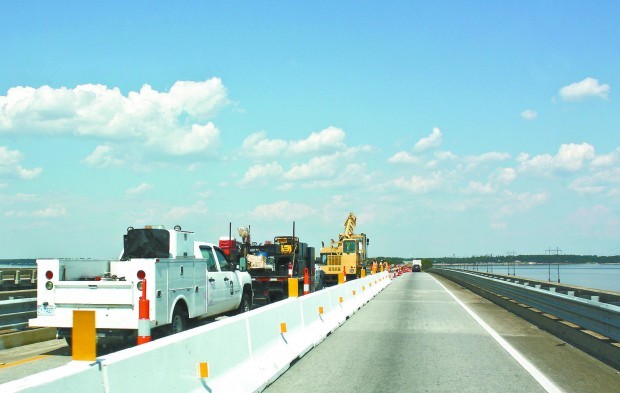 Work started on the Interstate 95 bridge over Lake Marion on Sept. 12, 2011. One of the two northbound lanes of I-95 over the lake will be closed for the next two months while repairs are made to the concrete decks. Motorists can expect heavy traffic congestion.

"I know it would be costly, but I would like to see the bridges in both directions widened to include a shoulder where a car can pull over if it gets in trouble," Ravenell said. "Right now the vehicle has to sit in the lane until help arrives.

"I don't know that they will widen the bridge, but that's why we're asking the (South Carolina Department of Transportation) to come up with some possible safety measures."

During its regular meeting Monday, council unanimously approved having Orangeburg County Administrator Bill Clark send a letter to S.C. DOT this week. A copy will be forwarded to the local legislative delegation.

Ravenell suggested an early warning system to alert motorists in the event of a crash.

"One example might be putting a light across both bridges one or two miles down the road," Ravenell said. "If there were an accident, the Highway Patrol could just push a button and it would warn motorists there is an accident so they can slow down.

"I think that would be one of the more adequate things that can be done."

The northbound I-95 bridge is currently undergoing work to rebuild its concrete deck, which is deteriorating.

Council also approved Councilman Willie B. Owens' motion to delay third reading of an ordinance authorizing a wastewater revenue improvement bond until its next meeting. The bond of just over $2 million is for Phase II and III of the West Edisto sewer system.

"The Finance Committee hasn't met to set the user rates yet," Owens said. "These are the rates people will pay to use that part the county has to pay for.

"I really don't know about the figures right now. It will be calculated in terms of the number of years we have to pay for it and how many citizens will be using it."

During council's last meeting it was reported the system is running a deficit of about $300,000 for its operations. The capital costs for construction were also about $300,000 more than originally anticipated.

Councilman Clyde Livingston and Vice Chairman Janie Cooper were not present for the meeting. Arriving late, Livingston apologized for his absence, saying he had been unavoidably detained due to an emergency involving a business client.

In other business council:

• Heard a report regarding council redistricting from Chairman Johnnie Wright.

"We have moved the numbers around to where every council member is within plus or minus one percent of 13,214 in each district," Wright said. "The next stage is to produce a map and hold a public hearing and three readings of an ordinance for the U.S. Justice Department to review."

• Gave unanimous third reading approval to an ordinance authorizing the issuance of $2.8 million in revenue bonds for water system improvements.

In a related matter, Clark said a multi-jurisdictional hazard mitigation plan will be placed on council's next meeting agenda. A presentation on the plan will be made to the public at 3 p.m. prior to the meeting.

• Entered executive session to discuss an economic development issue and a legal briefing regarding a threatened claim.

Bamberg, Calhoun and Orangeburg county residents are not doing a good job of maintaining social distancing despite government recommendations,…

Lauren Snipes didn't know what to think when her normally happy 13-month-old began to get fussy and burn with fever.

An Orangeburg teen accused of two rapes has been allowed to return to his parents’ Orangeburg home while he awaits trial.

A Eutawville woman was shot while she was holding her 3-year-old on Wednesday night, according to an Orangeburg County Sheriff’s Office incide…

Orangeburg and Calhoun counties each have one more resident who has tested positive for the coronavirus, according to figures released Saturda…

Local gasoline prices have plummeted to levels not seen in about five years, but social distancing has prevented people from taking advantage …

The S.C. Department of Health and Environmental Control announced Sunday that 132 more people have tested positive for coronavirus, including …

Orangeburg police are seeking the man who assaulted a teen and ran off into a wooded area, according to Orangeburg Department of Public Safety…

I-95 traffic was at a standstill following a fatal collision on the bridge over Lake Marion in August 2011.

Work started on the Interstate 95 bridge over Lake Marion on Sept. 12, 2011. One of the two northbound lanes of I-95 over the lake will be closed for the next two months while repairs are made to the concrete decks. Motorists can expect heavy traffic congestion.