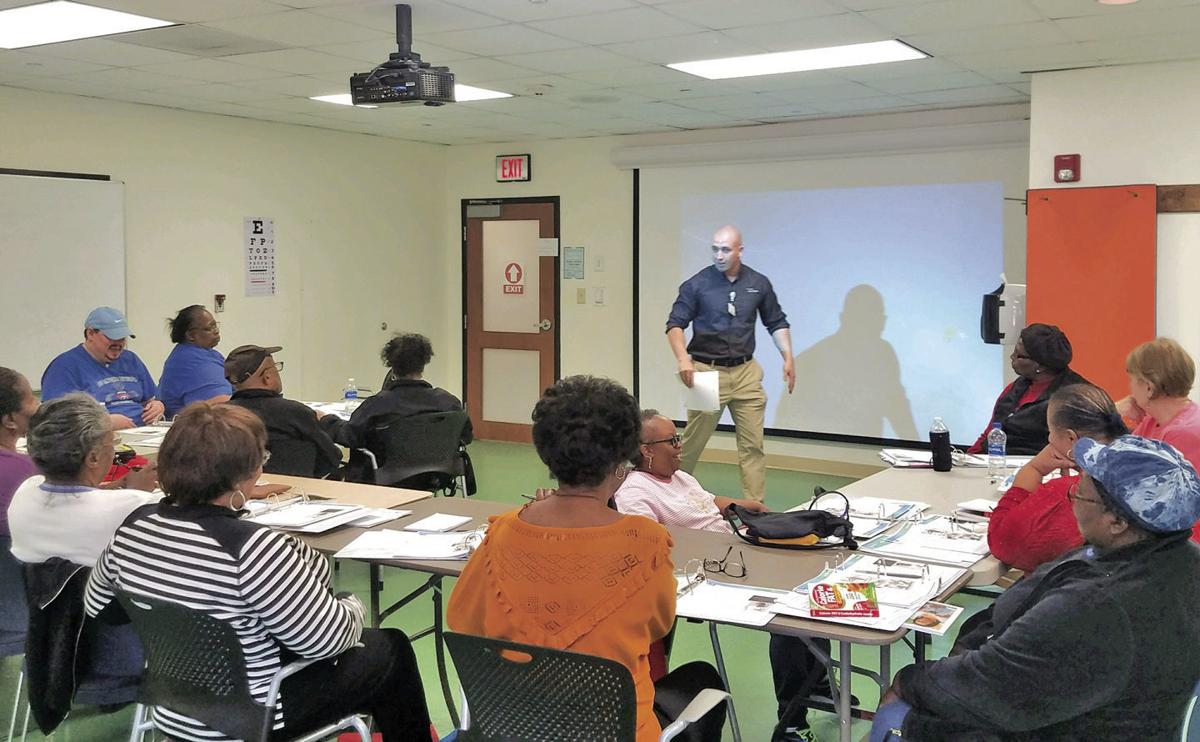 Wayne Hutto, coordinator of RMC’s intensive Diabetes Prevention Program, talks with participants about the importance of getting enough exercise and eating healthier during the Feb. 6 class at HealthPlex in Orangeburg. 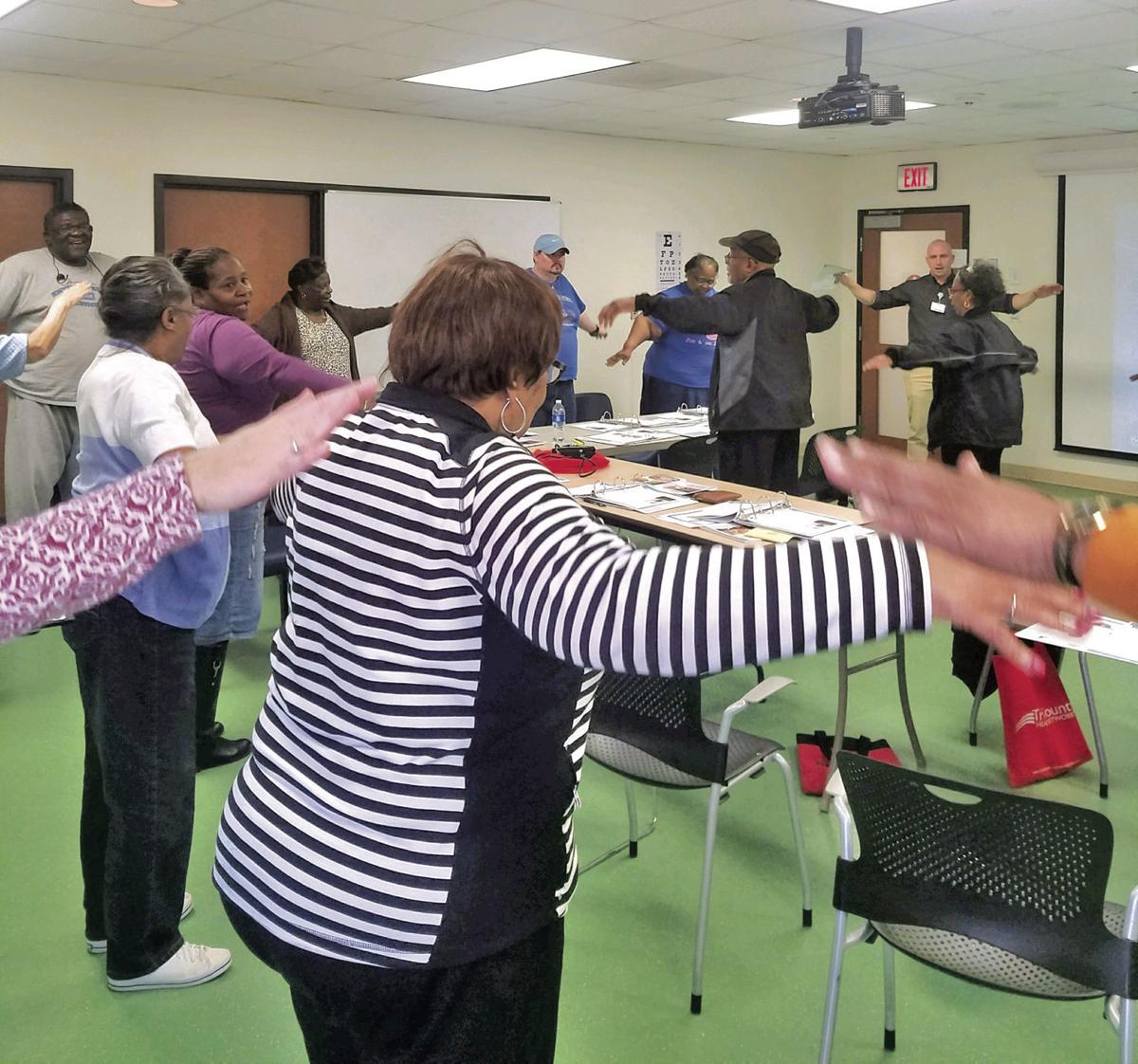 Participants in the RMC HealthPlex Diabetes Prevention Program do arm exercises to get their blood flowing at the beginning of the Feb. 6 class. Instructor Amy Metts cheered the group on, calling out, “"Lift your arms up and fly like a bird!"

As the second month of 2018 winds down, many of us are aggravated with ourselves for not sticking to our New Year's resolutions to eat healthier, exercise and lose weight.

One group of Orangeburg residents, however, were on track to reach those goals after attending their second week of the intensive 16-week Diabetes Prevention Class at the Regional Medical Center's HealthPlex in Orangeburg. The program kicked off on Jan. 23.

Sixteen adults diagnosed as being pre-diabetic showed up Feb. 6 to work with program coordinator and instructor Wayne Hutto and instructor Amy Metts in the yoga room at HealthPlex. The classes run about 45 minutes to an hour, and the focus is on getting fit.

Hutto and Metts asked the participants to get up from their chairs and do an arm exercise for a few minutes to get the blood flowing through their bodies.

"Lift your arms up and fly like a bird," Metts called out, cheering them on.

Hutto told the participants, "We want you to watch less TV, eat smaller meal portions and to not make excuses."

He asked each of them to name one activity they did during the week to get their heart rates up.

"This would not include washing clothes and dishes. Did you do anything like Zumba, Pilates, yard work?" he asked.

Some said they rode a bike and others said they walked for 30 minutes to a couple of hours each day.

Hutto noted, "Participants who follow the program will normally see a weight loss and, hopefully, a reduction in medications they're taking."

Class members are provided with food and activity trackers to help them keep up with their calorie intake and the amount of exercise they're getting. They also receive the "Dash for Good Health" southern-style recipe book.

A two-hour class on Feb. 20 focused on healthy meal preparation. A dietitian with the S.C. Department of Health and Environmental Control showed participants how to prepare a healthy meal.

Exercise is also emphasized. Metts said those in the Diabetes Prevention Program have access to the gym at HealthPlex.

"I joined this program to learn to eat better and to interact with other people reaching for the same goal as me," he said, adding that his doctor suggested he get active and join a gym.

"This class brings forth awareness as it puts our attention on not getting diabetes. I am not a diabetic but also do not want to get diabetes," she said.

"Over the course of time, we will learn how to read food item labels, lose weight, learn how to cook properly, what foods we should avoid," she added. "I am excited to see how we change and grow. I am glad to be a part of this group."

Thanksgiving changes: When a tradition comes to an end

As lives change, so do family traditions. In 1983, several family deaths caused us to change the way we would spend Thanksgiving.

When to shop: Search store hours for Thanksgiving and Black Friday

Many retailers are changing their Thanksgiving store hours for 2020. Find out which stores are open when.

Test your Turkey Day Knowledge with this Thanksgiving Trivia quiz!

What kind of Thanksgiving food are you?

Are you into family? Football? Or most focused on a post-meal nap? Take our quiz to find out what part of the meal you most closely connect with.

What to do if you're drowning in debt

These are some new hobbies to try around the house

These are some new hobbies to try around the house

How to read more books even when you're busy

How to read more books even when you're busy

Wayne Hutto, coordinator of RMC’s intensive Diabetes Prevention Program, talks with participants about the importance of getting enough exercise and eating healthier during the Feb. 6 class at HealthPlex in Orangeburg.

Participants in the RMC HealthPlex Diabetes Prevention Program do arm exercises to get their blood flowing at the beginning of the Feb. 6 class. Instructor Amy Metts cheered the group on, calling out, “"Lift your arms up and fly like a bird!"