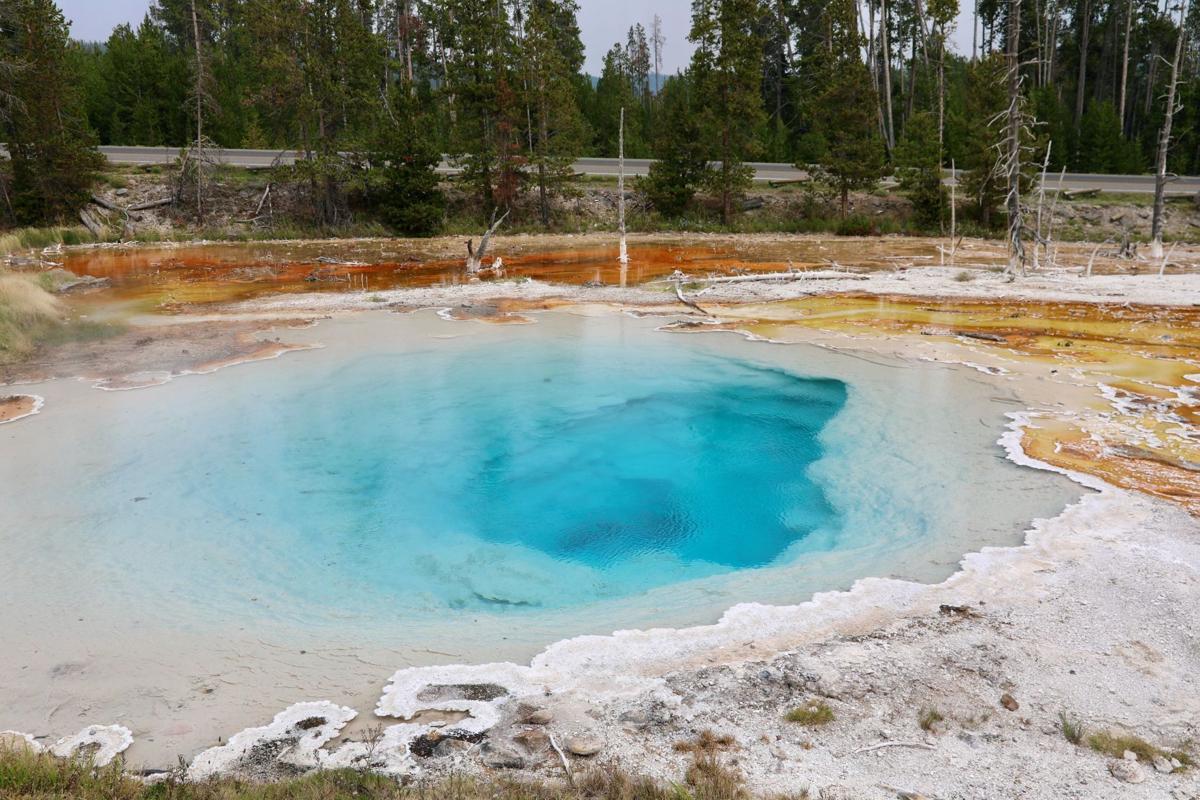 The Lower Geyser in West Yellowstone is shown. 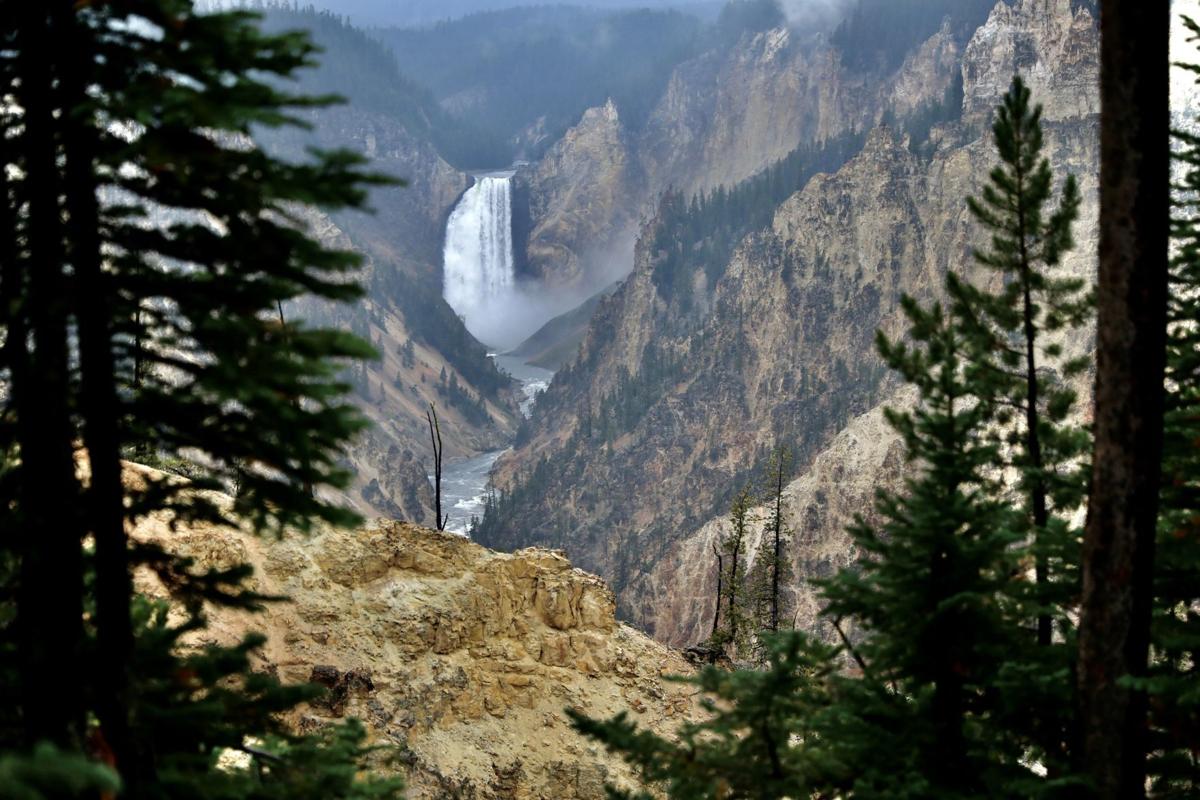 The waterfall going into the Yellowstone River is pictured. 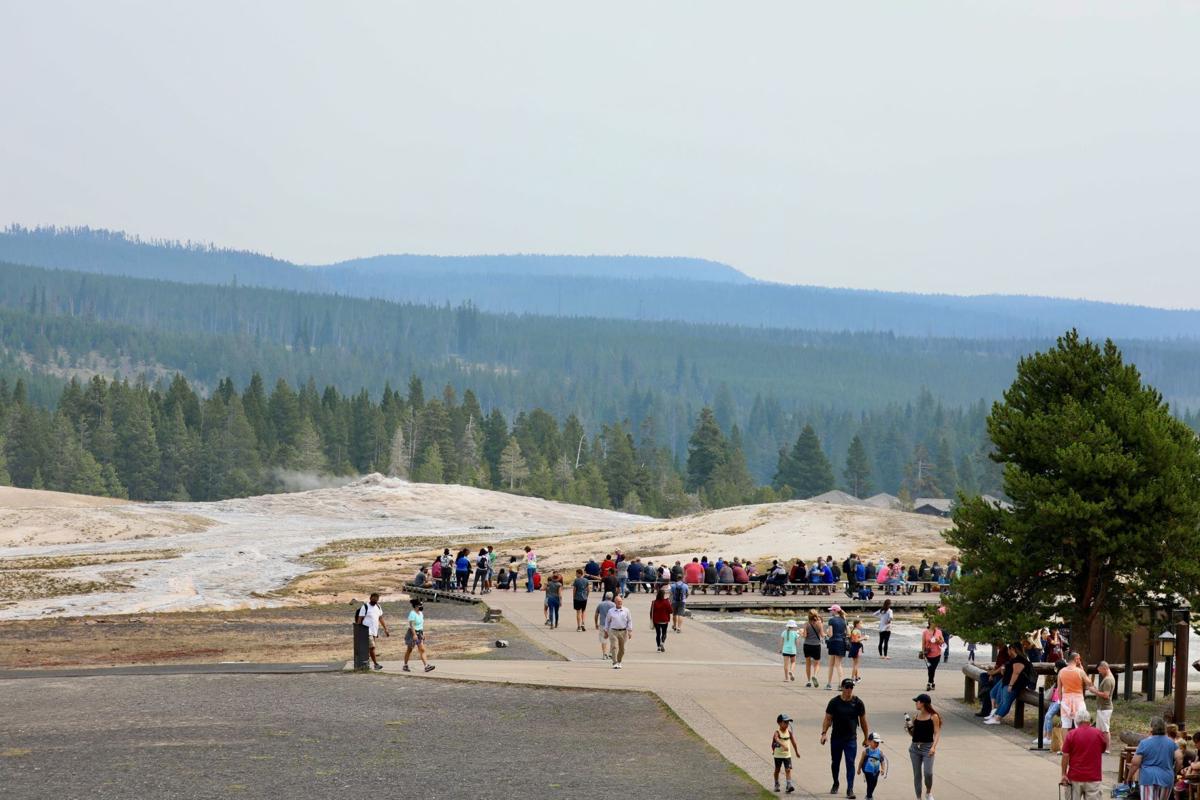 Walking to Old Faithful before the eruption at 1:15. There was a lot of smoke in the air from the fires in California which made it hard to see some of the mountains around Old Faithful. 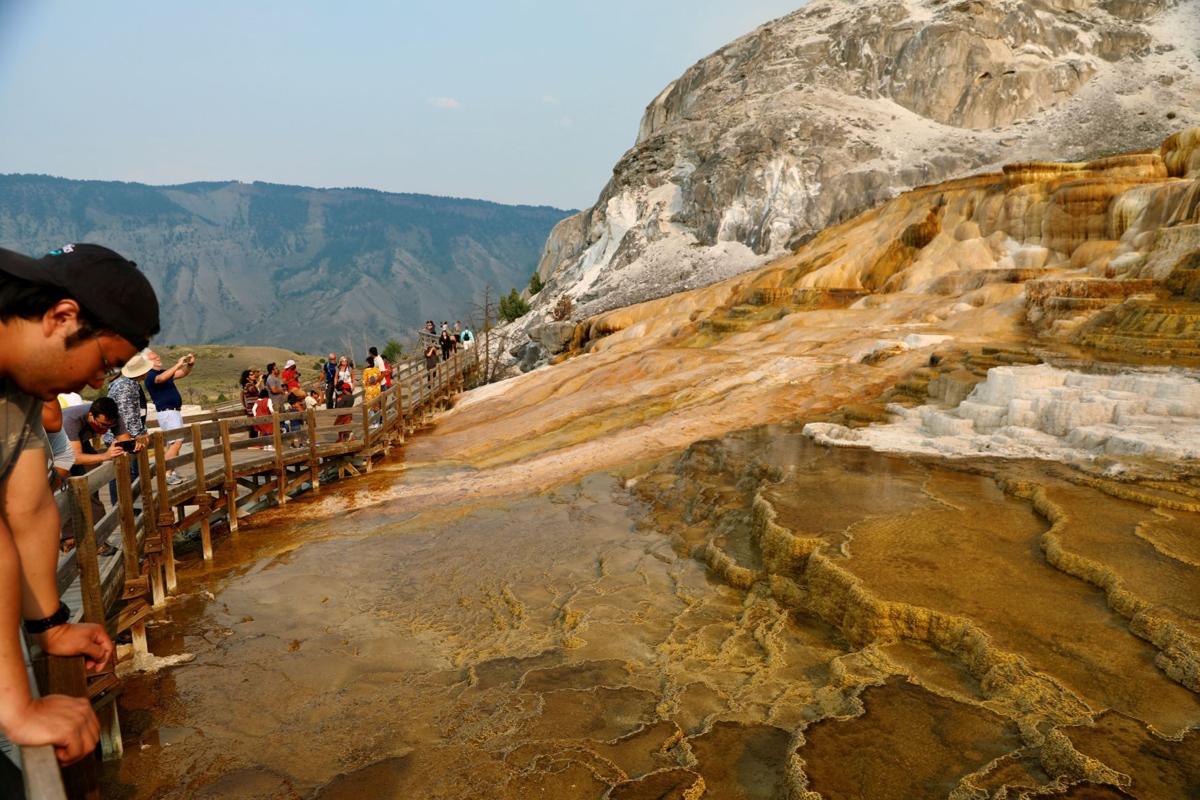 Mammoth Hot Springs is shown with the mountains in the background. 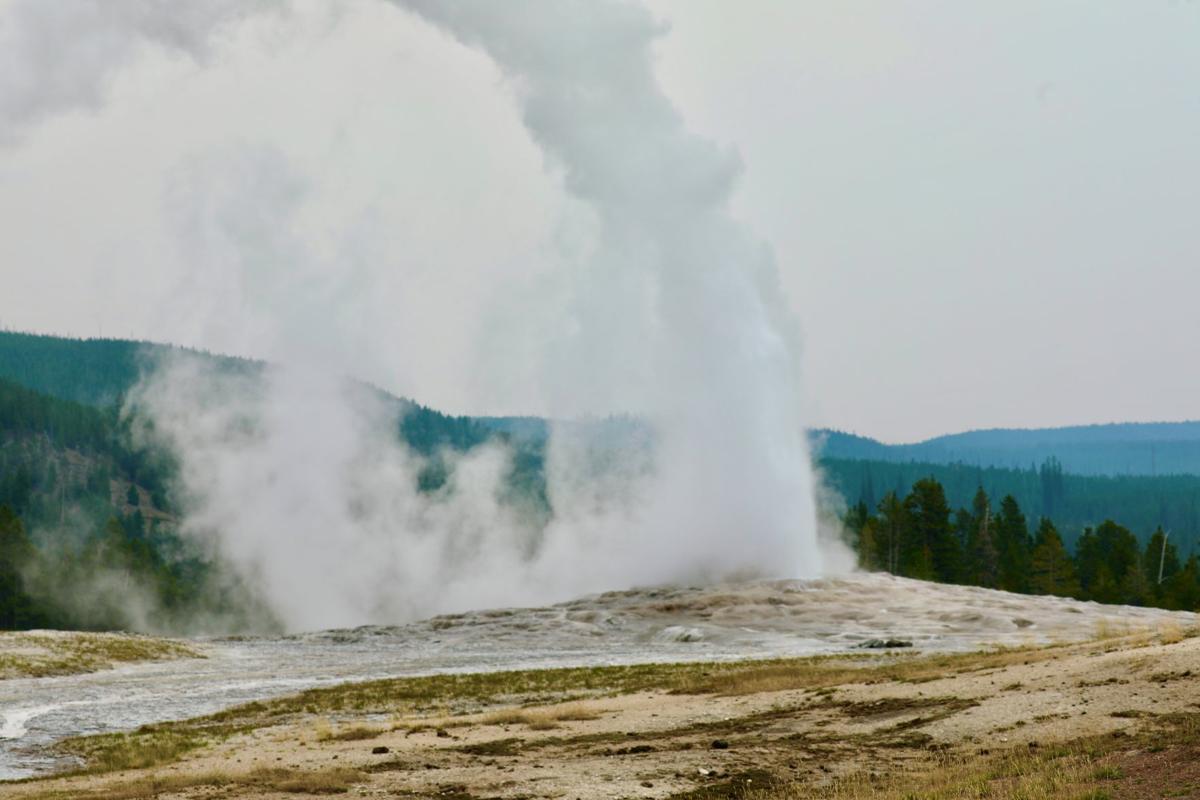 We woke up early Sunday morning, Aug, 15, and headed to the Hartsfield-Jackson Atlanta International Airport. The airport is already busy with a lot of travelers. I was nervous boarding the airplane but it went very smoothly.

We had to keep our masks on the whole trip on the plane. About 3 1/2 hours later, we landed at the Salt Lake City International Airport.

Even though we couldn’t see much of the mountains, it was so good to be out west with some good friends. Monday morning, we returned to the airport to meet our group. Our first stop was to a Korean restaurant in Salt Lake City for lunch. After lunch, we got to go visit the state capitol in Utah.

After we visited the state capitol, we headed for Idaho. On our way there, the sky became a little clearer and we could see the large mountains in Utah and Idaho. Our first stop in Idaho was Bear World where we got to see a lot of black and brown bears and some baby bears playing.

Our first night was spent in Idaho Falls in Idaho. We all were tired and worn out from traveling and walking so much.

On Tuesday after breakfast, the group boarded the bus and headed for West Yellowstone in Wyoming. The scenery was majestic as we drove into Yellowstone. So many people were traveling along the winding roads to see the different sections of West Yellowstone.

The first geyser we saw was Old Faithful and it did its thing and was pretty awesome. There were some tourists there that had seen it erupt before, saying that day wasn’t as big as other times, but to me it was really special.

It was so interesting to see so many different geysers and rock formations and gigantic mountains. The next day we went deeper into the park to the center of Yellowstone, where the mountains and waterfalls and rivers and lakes just got bigger and more beautiful.

Indeed, the country here in the United States is beautifully majestic. I can’t help but admire our beautiful country. The beautiful forests and the long roads full of deer and bison. The river so big and beautiful made our bus rides seem so short and so much fun. Even during a pandemic, the number of tourists throughout the canyons and mountains was so impressive.

On our third day, we went back to Idaho Falls after visiting more canyons and places along the way. We spent another night in Idaho Falls, and on the fourth day, we headed back to Salt Lake City with a much better appreciation of the beauty and vastness of our great and beautiful country. We boarded the plane around 5:30 p.m. heading back to Atlanta, tired and exhausted but happy and excited about our wonderful trip out west.

What household items need cleaning everyday and what can wait

How much spending money should parents give their college student?

How much spending money should parents give their college student?

How to perk up when you're in an afternoon slump

How to perk up when you're in an afternoon slump

ORANGEBURG COUNTY HISTORY: The roots of the Orangeburg County Library

Since February 2020, construction of the new Orangeburg County Library and Conference Center on Russell Street has been moving toward completi…

The Lower Geyser in West Yellowstone is shown.

The waterfall going into the Yellowstone River is pictured.

Walking to Old Faithful before the eruption at 1:15. There was a lot of smoke in the air from the fires in California which made it hard to see some of the mountains around Old Faithful.

Mammoth Hot Springs is shown with the mountains in the background.