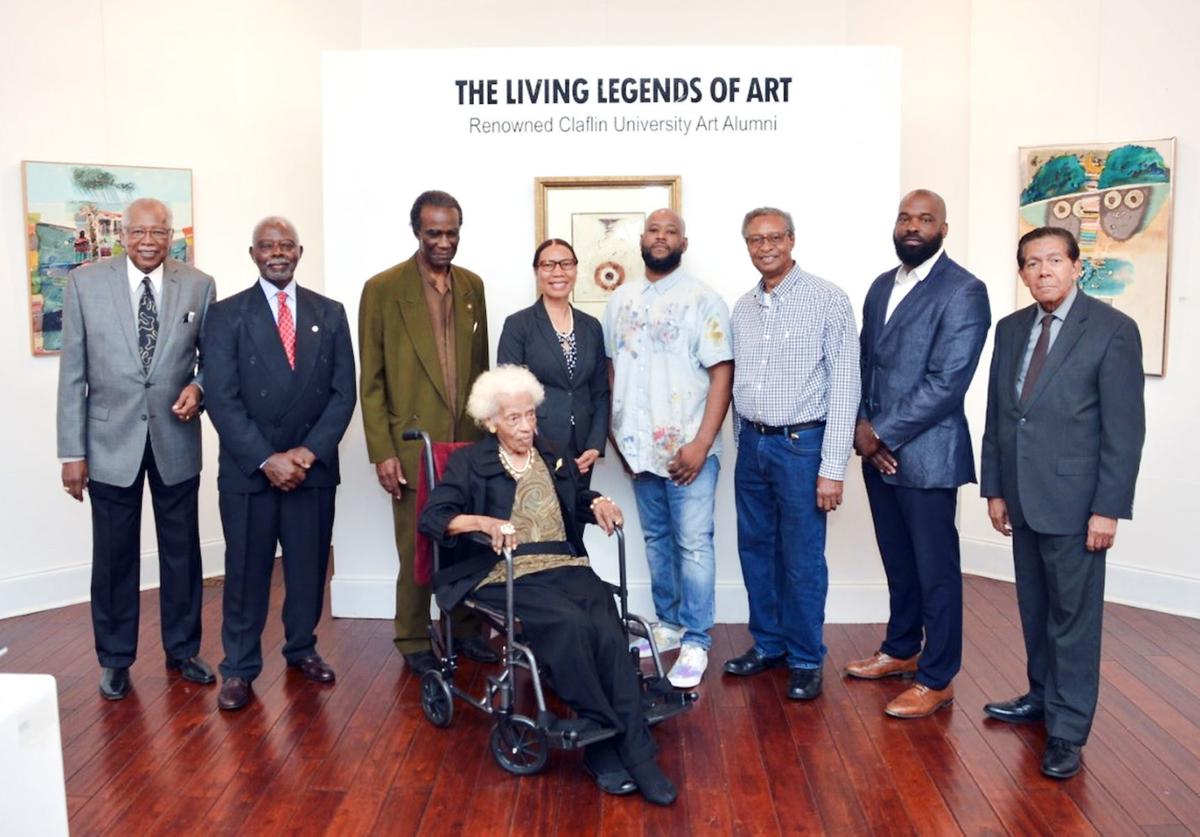 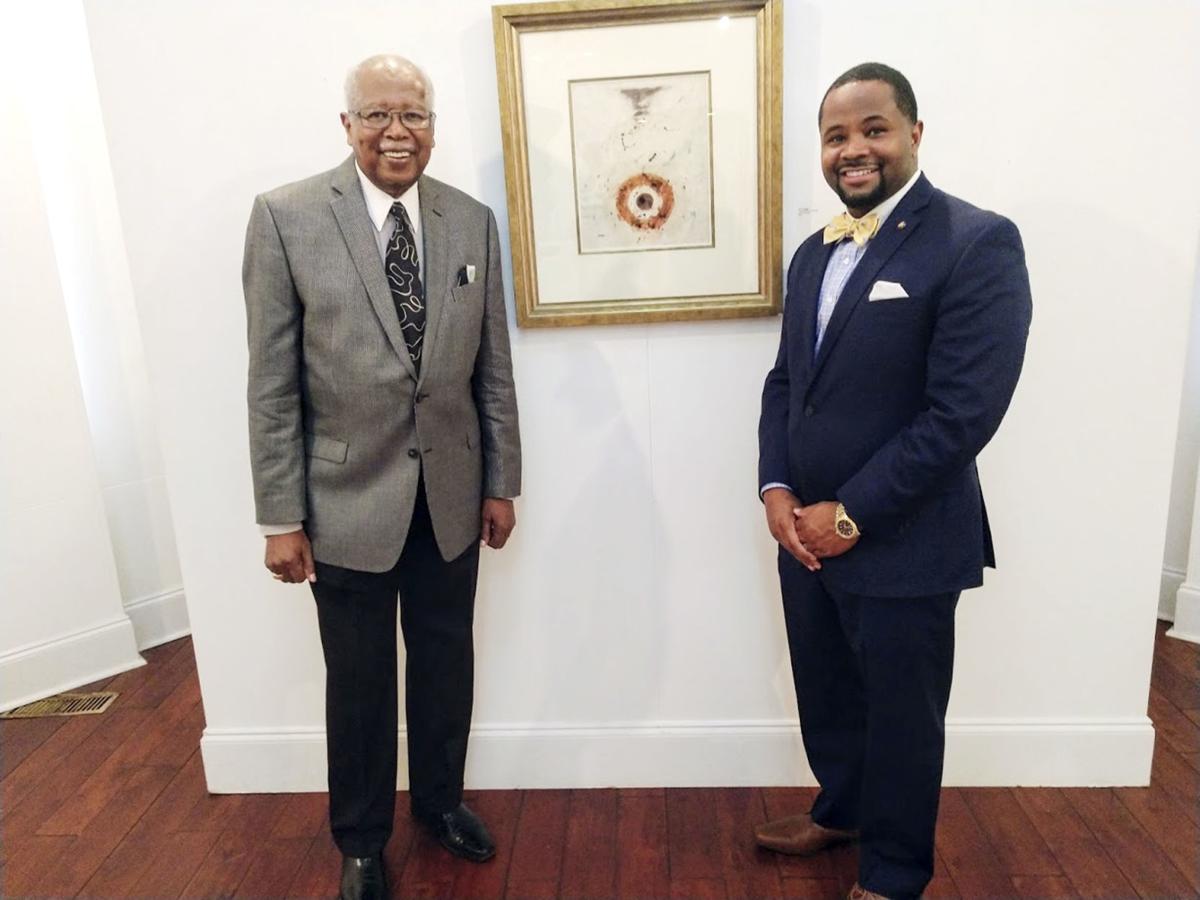 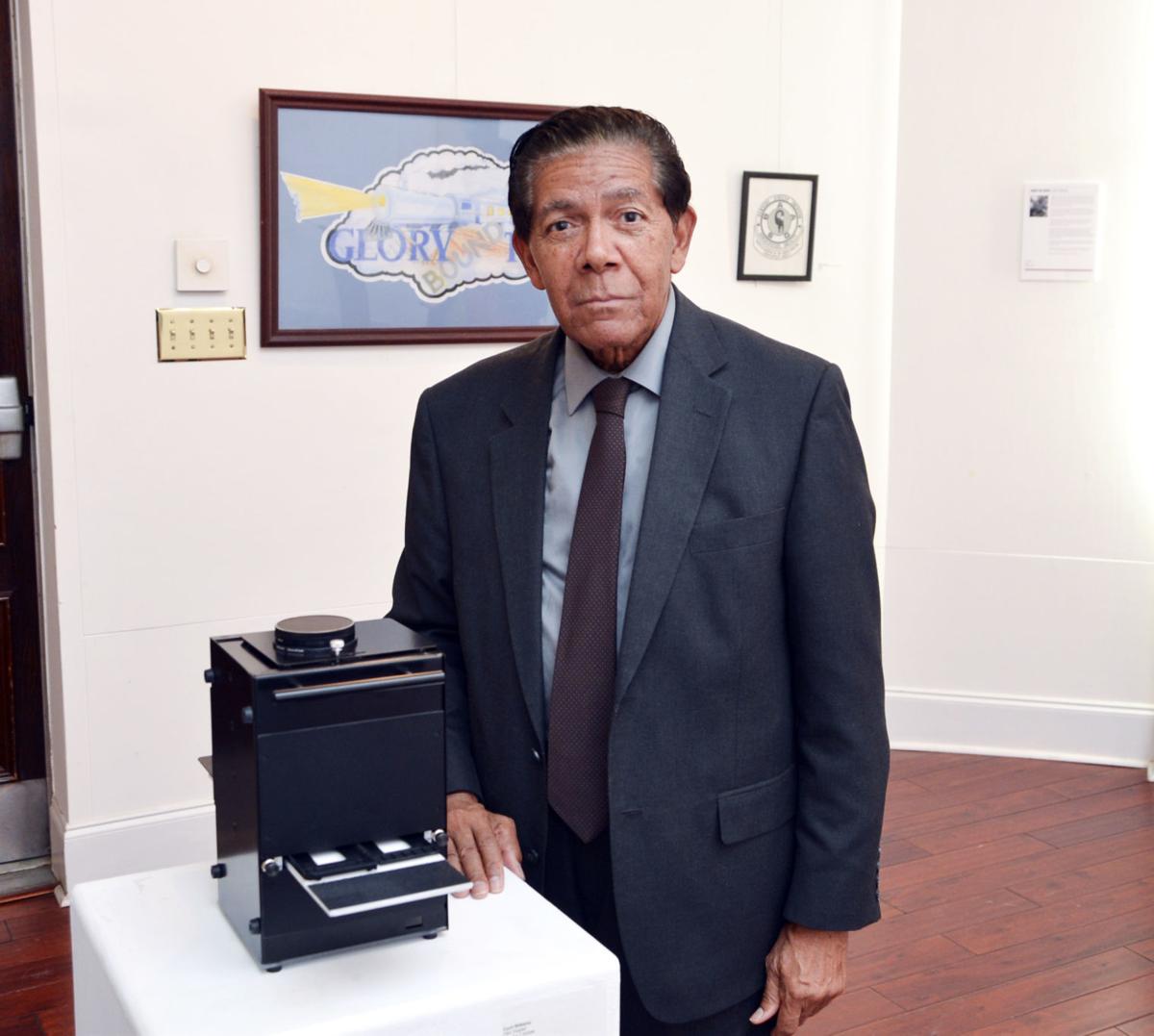 Cecil Williams, renowned author, publisher, inventor and photographer of the Civil Rights Movement, with his most recent invention, The Film Toaster, which transfers film to a digital format. 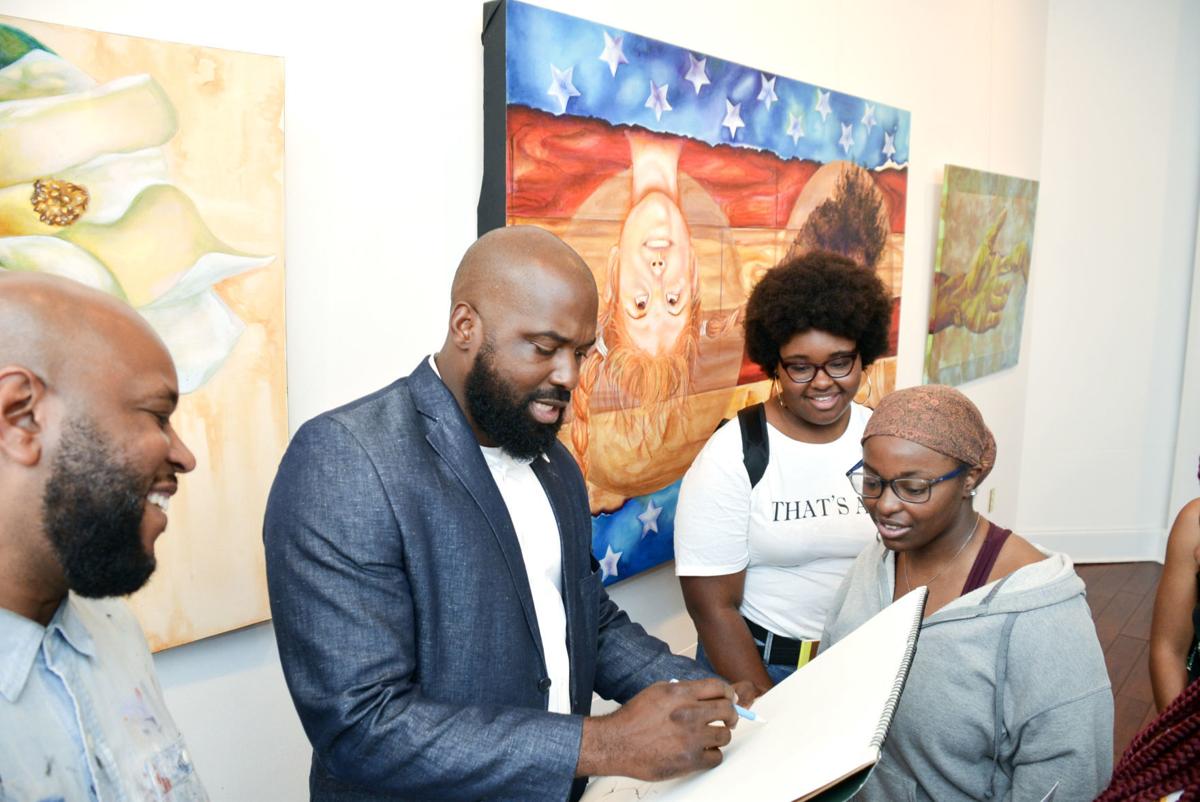 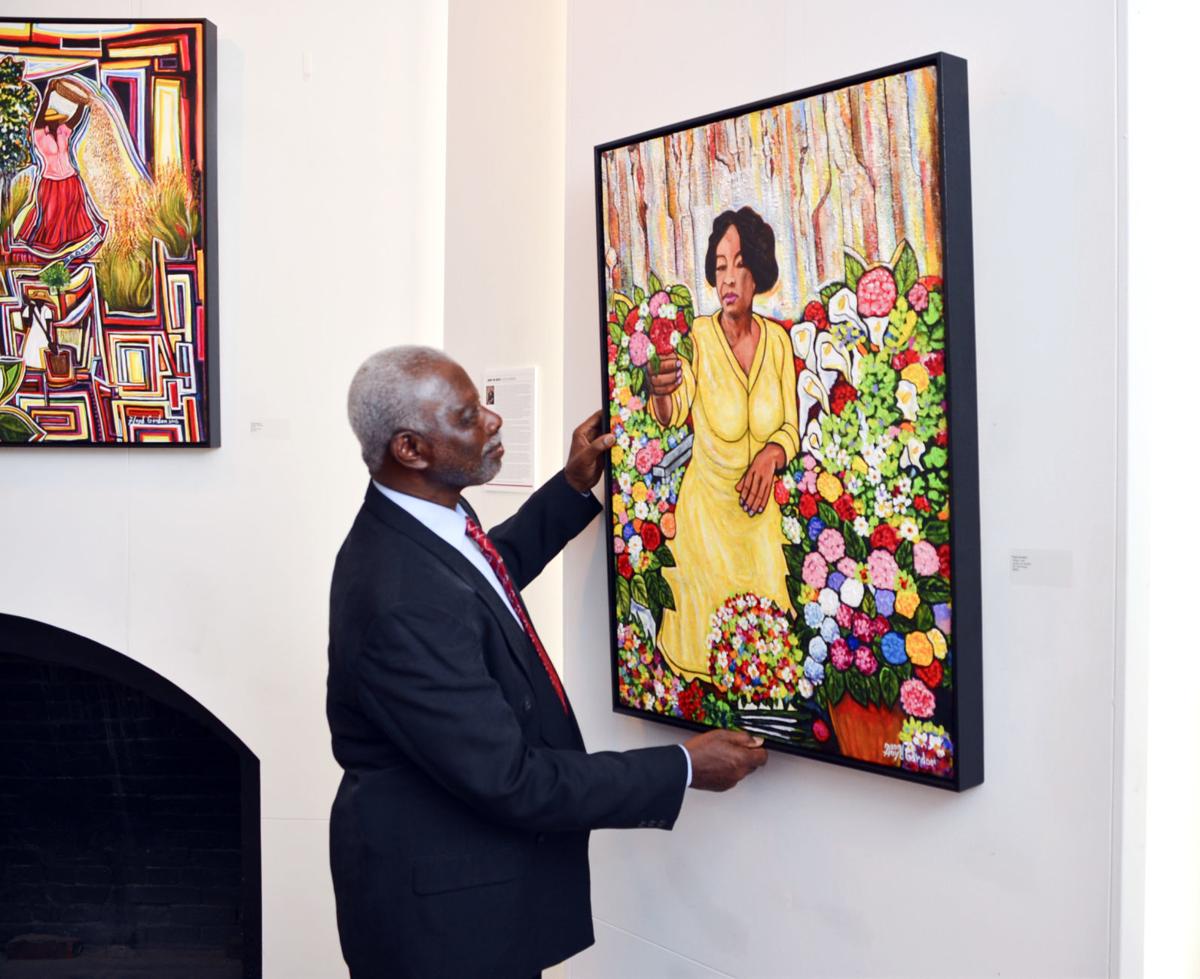 Floyd Gordon is considered a treasure for his colorful paintings depicting the people, culture and rituals of rural South Carolina. 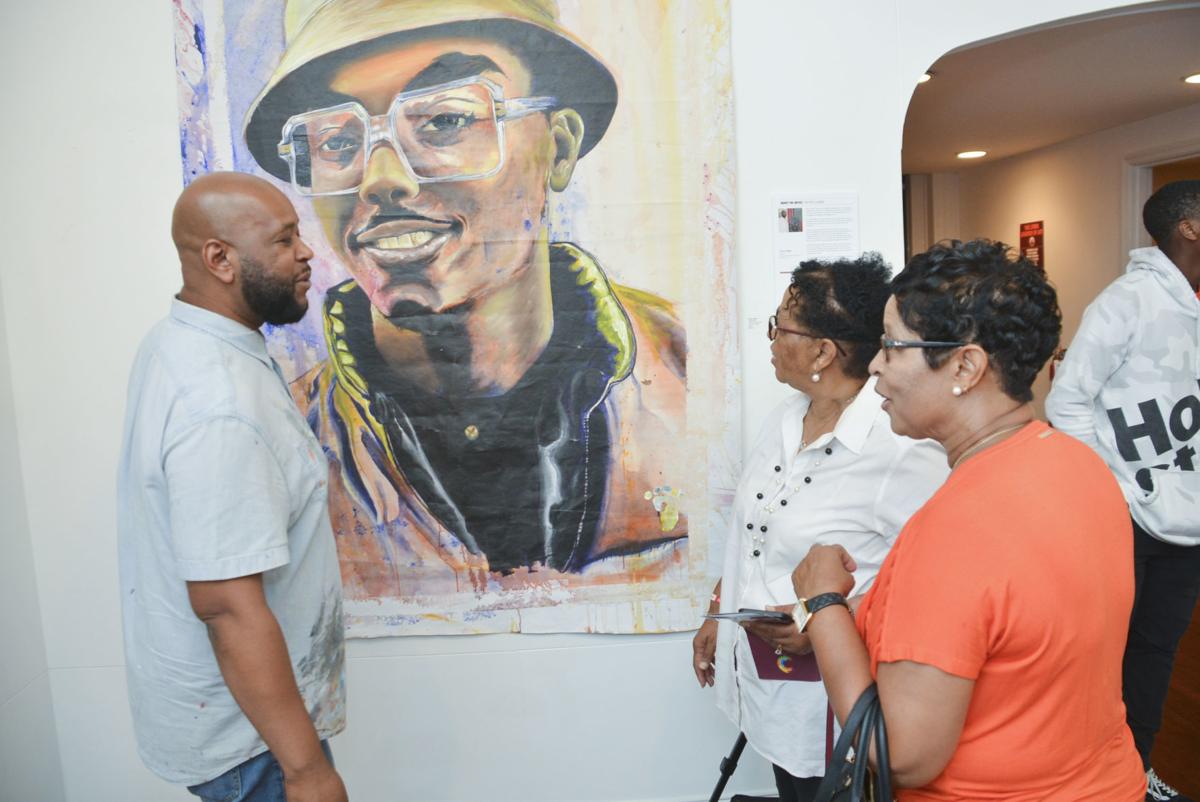 Cecil Williams, renowned author, publisher, inventor and photographer of the Civil Rights Movement, with his most recent invention, The Film Toaster, which transfers film to a digital format.

Floyd Gordon is considered a treasure for his colorful paintings depicting the people, culture and rituals of rural South Carolina.

Claflin University’s “The Living Legends of Art” exhibition reflects generations of talented visionary artists who have contributed to the university’s legacy in the visual arts.

The eight artists whose portraits, sculptures and inventions are on display through Nov. 1 at the university’s Arthur Rose Museum represent distinctly different styles, inspirations and focus. However, the fraternal bonds that unite these artists are their love for Claflin and their profound respect and gratitude for the late Dr. Arthur Rose, who helped found the Department of Art. He also mentored countless African-American visual artists throughout his home state of South Carolina.

The Tisdales: 25 years of progress for Claflin

“The exhibition is a great concept and the importance of this event is magnified by the presence of Dr. Rose’s wife, Elizabeth,” said Dr. Leo Twiggs (Class of 1956) at a reception to launch the exhibition and present the artists to the campus community. “I studied under Arthur Rose and later helped supervise the renovation and transformation of the building from classrooms and a studio into a museum. It’s very nostalgic for me.”

Twiggs achieved international recognition for his paintings which are done in a unique, innovative batik technique. In 2016, he completed a series of nine batik paintings titled “Requiem for Mother Emanuel” that honors the nine men and women killed during a worship service in June 2015 at historic Emanuel African Methodist Episcopal Church in Charleston. The paintings garnered high praise and Twiggs was interviewed by a host of national print and broadcast media. In 2017, he received the Order of the Palmetto, the highest civilian honor awarded by the governor of South Carolina. It is awarded to persons who make contributions of statewide significance. Twiggs was also presented the Elizabeth O’Neill Verner Governor’s Award given annually by the Arts Council to recognize outstanding achievement and contributions to the arts in South Carolina.

In addition to Twiggs, the lineup of artists includes renowned photographer and inventor Cecil Williams (Class of 1960) and Floyd Gordon, a 1980 graduate who sold his first painting while in the seventh grade.

Williams is recognized throughout the state and beyond for his poignant and iconic images chronicling the civil rights movement in South Carolina. He acquired a hand-me-down camera when he was 9, and by age 15 worked as a professional and freelance photographer for such publications as Jet Magazine, the Afro-American, Pittsburgh Courier and the Associated Press. His photographs have been widely distributed and appeared in more than 100 print and digital publications. Williams has also been featured in numerous documentaries and television interviews. Several years ago, he invented the Film Toaster, a device which preserves negatives by transferring them into a digital format.

Williams was presented the Order of the Palmetto in 2017, and in 2019, he received the Elizabeth O’Neill Verner Governor’s Award for Lifetime Achievement.

Gordon has shared his artistic talents throughout the world since selling his first painting as a student in junior high school. His paintings are characterized by the use of bold, vibrant colors. His themes capture the culture, traditions and rituals of rural life in his home state of South Carolina.

“I began coming over to Claflin to meet with Dr. Rose while attending junior high school,” Gordon said. “He was teaching during that time, and I was fortunate enough to be able to spend time with him and several other artists attending Claflin. He’s the reason I chose Claflin. That’s when I decided to get serious about being an artist.”

The other featured artists at the exhibit are Raymond Floyd (Class of 1963), a Spartanburg native who has painted scenes from his hometown since the 1960s; Damion Johnson, a 2001 graduate whose artistic journey began in middle school; Glover Richburg (Class of 1973), an award-winning artist who gained national recognition when the United Negro College Fund decided to use his painting, “A Valuable Lesson,” as the poster for its annual gala; Patro Ulmer (Class of 2001), an art educator; and Winston Wingo, a 1976 graduate, whose painting and sculptures have been shown in exhibits throughout the United States, Canada, France and Italy.

Dr. Brenda Faison, chair of Claflin’s Department of Art said “The Living Legends of Art” exhibition is a sesquicentennial celebration event that pays tribute to these distinguished, creative alumni. The exhibition also honors the university’s visionary leadership and creativity in the visual arts over a 150-year period.

“As art faculty, we follow in the footsteps of previous visual arts faculty members like Arthur Rose and Robert Charles Bates, the first certified, African American architect,” Faison said. “Both of whom taught in the Department of Art during their tenure at Claflin. Some of our alumni being honored through the exhibit studied under Dr. Rose.”

The alumni participating in Claflin’s “The Living Legends of Art” exhibition represent six decades of artistic excellence. Damion Johnson and Patro Ulmer are the youngest of Rose’s pupils, as both are 2001 graduates of Claflin’s Department of Art.

“The first time I entered the building, what is now the museum was a classroom and I attended a French class,” Johnson said. “The late Mr. Herman Keith was the bridge between the different generations of Department of Art graduates. He was a South Carolina State alumnus, and he and Dr. Rose were good friends, who taught at SC State during same period. Mr. Keith was also a professor in the Department of Art at Claflin. I used to meet with them and Mr. Wingo and they inspired me to become serious about developing my talents and focused as an artist. There definitely is a bond and a connection between us.”

The museum’s hours of operation are 9 a.m. to 4:30 p.m. Monday through Thursday; 9 a.m. to noon on Friday; and by appointment only on Saturday.

Claflin University will host the critically acclaimed dance company Ailey II, The Next Generation of Dance, on Wednesday, Oct. 23 at 7:30 p.m.…

SAVE on your first 3 months! Join today