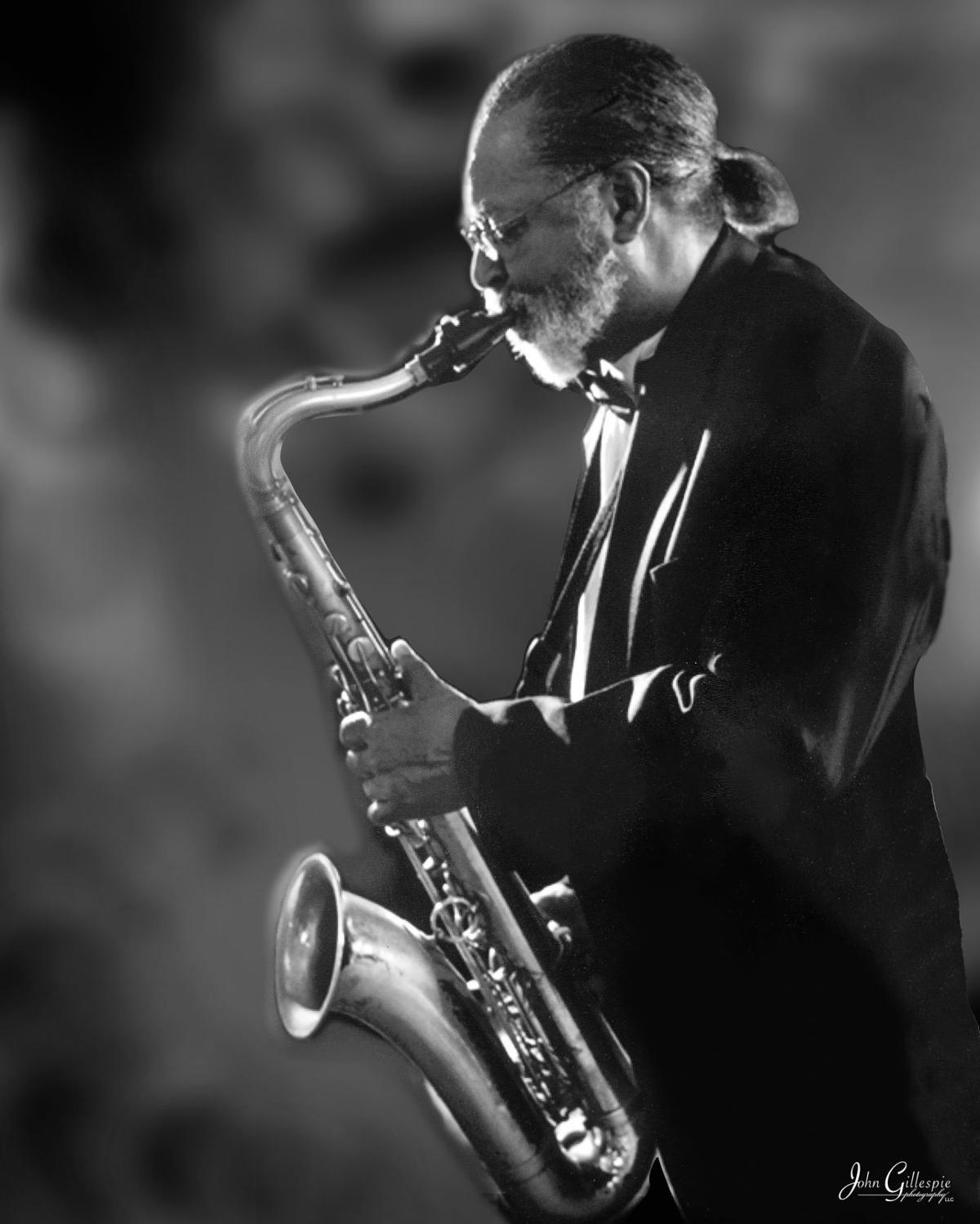 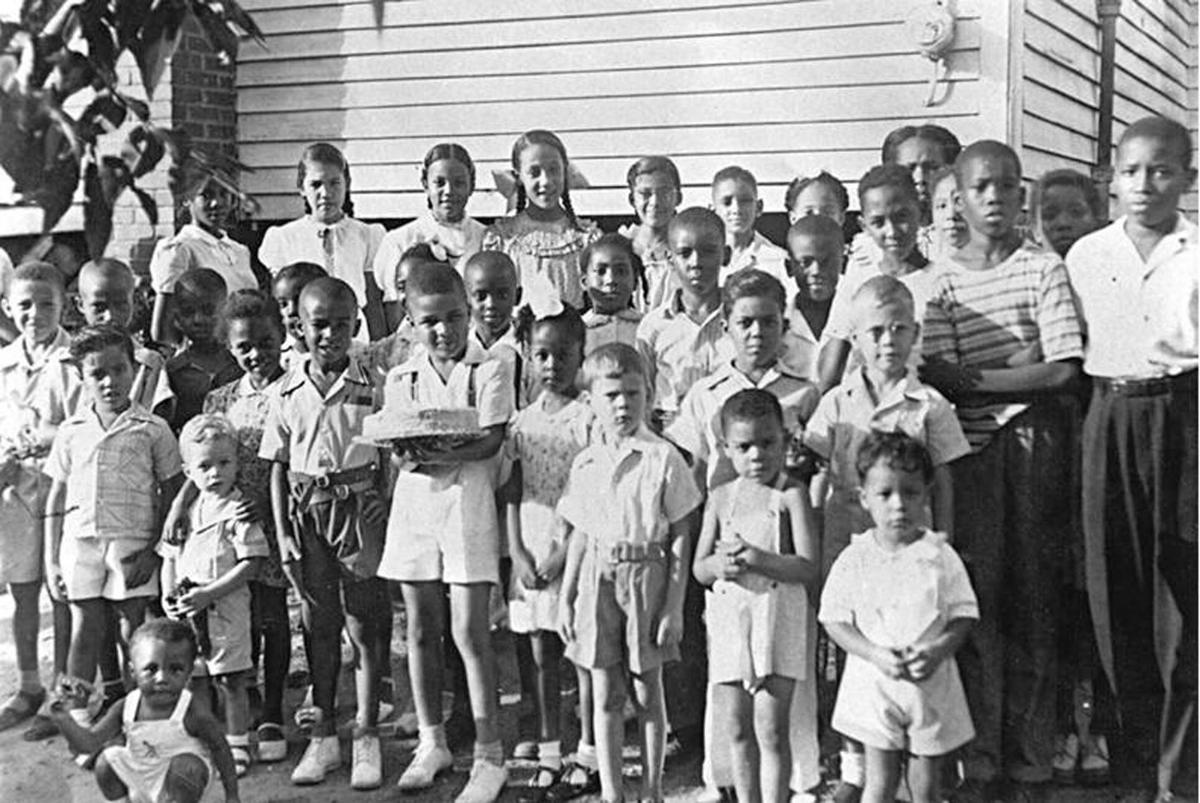 Celebrated jazz musician Skipp Pearson is pictured as a child in his native Orangeburg. Pearson, who is pictured left of the child with the cake, was awarded the Order of the Palmetto, South Carolina’s highest civilian honor, on Saturday for his more than three decades of work to keep jazz alive in South Carolina as an educator and entertainer. 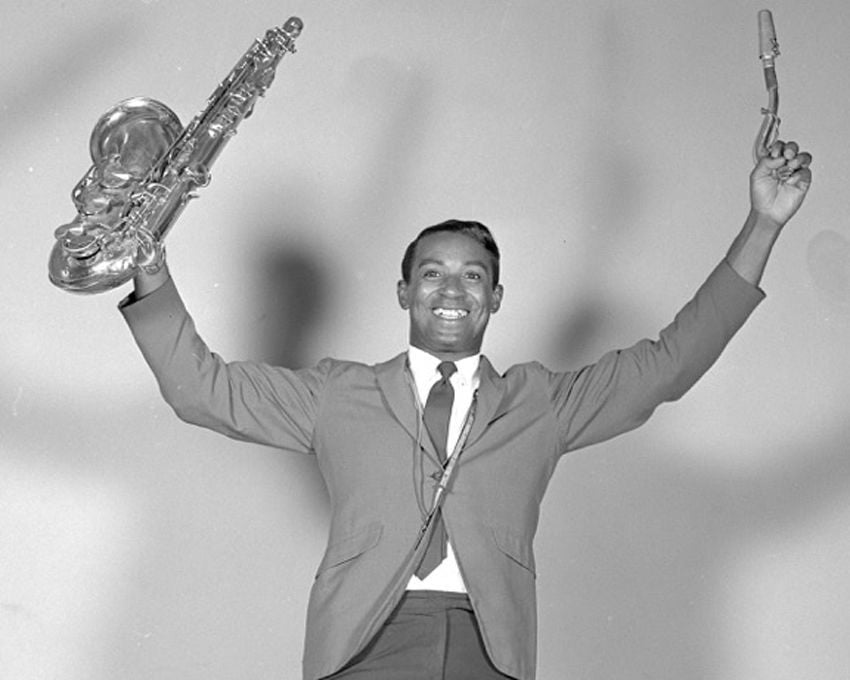 Master saxophonist and Orangeburg native Skipp Pearson is pictured in an Orangeburg studio at the age of 20.

Thales Thomas “Skipp” Pearson recalls growing up in Orangeburg with much adoration, particularly as it helped nurture his love for the enduring music genre that has made him one of the state’s most celebrated jazz musicians.

Pearson received the Order of the Palmetto, South Carolina’s highest civilian honor, from Gov. Nikki Haley during a ceremony held on Saturday at the Johnson Hall Auditorium of the Darla Moore School of Business at the University of South Carolina.

Pearson, who has worked for more than three decades to keep jazz alive in the state as an educator and entertainer, recalled when he first decided to learn how to play the alto saxophone, the instrument that helped propel him to his status as South Carolina’s ambassador of entertainment and hospitality.

“In the spring of 1947, my father took me to a baseball game between the Orangeburg Tigers and the Black New York Yankees. Before the game, Tab Smith, an alto sax player, and his quartet played music of the era,” Pearson said.

“I recall that I was 10 years of age, and it was the first time I know that I paid attention to what I learned later was an alto saxophone. It was at that tender age that I decided I was going to learn how to play that instrument,” he said.

He said growing up in Orangeburg had a large impact on him, providing rich ground for the cultivation of his love of not just jazz, but other music genres.

Pearson has fond memories of the jazz he heard being performed in the band room at then-South Carolina State College.

“When I was growing up in the ‘Burg, as it was called, Orangeburg was a city that was bustling with the arts and music. I had the ultimate place to listen to some of the finest jazz music being played in South Carolina, and that was South Carolina State’s band room,” he said.

“My father was ex-military so we were able to secure housing on the land owned by the college. I remember the great Lonnie Hamilton, George Kenny, Houston Person, Oscar Rivers and Shellie Thomas all playing in that band room," Pearson said.

“These cats, who could have been anywhere else in the world, were all in State’s prestigious band program. How they played and what they played sparked my interest. I used to sit on my bottom in the dirt and listen to them for hours outside the open window of that band room."

While he said the “wonderful music” of jazz was all around him when he was a youngster, it was just one of many kinds of music he became connected with.

“For me, loving all genres of music as I did was as close to heaven as a child could come. I must give credit to my grandfather for instilling in me a love for all forms of music ... ,” Pearson said. “On Saturday evenings, we would first listen to the Grand Ole Opry and the country music stations and then finish our evenings by listening to the big swing bands of the early '40s playing from the famous Roseland Ballroom.”

Pearson grew up in post-World War II Orangeburg, a time when the city was making major changes.

“What were then called Claflin College and South Carolina State College were the organizing strengths of all activities in the black community,” he said.

Pearson graduated in 1973 from Claflin College with a bachelor’s degree in music. He began his music career at age 15 and went on to form his own band and secure a spot on the D. Jack Moses show broadcast on WCSC-TV in Charleston in 1953.

As a young man, Pearson joined the U.S. Air Force and later attended South Carolina State College. While enlisted in the USAF, he became a member of the U.S. Armed Forces Band, performing throughout the United States and abroad. Pearson was also a longtime member of the S.C. National Guard Band. After serving in the military, Pearson formed a group that played for many years in the Washington, D.C. area.

Who has he most enjoyed sharing the stage with?

“Everybody!” he said, adding that finding his own voice in music is a lesson he learned from jazz great Houston Person, an alumnus of SCSU.

“That advice will follow me to my grave, and is what I routinely share with young players. Houston told me that I had to find and build my own voice on the sax and that it was from that place of individuality that I would begin to discover who I was as a jazz player,” Pearson said. “Once you find your voice, the rest is easy, and then you just play from your heart and soul.”

What makes his music uniquely his?

“Maybe it is my approach, how I choose to build each phrase, leading me to share an idea of a personal sound with the rest of the ensemble. Or maybe it is my knowledge of an idea I want to express to achieve the sweetest sound I can make on the horn," Pearson said.

“As a player, I really do not believe you think about what makes you unique. Each time you pick up your chosen instrument, you simply have a very intimate conversation with a group of players, and what is unique about you can suddenly be heard,” he said.

Pearson was inducted into the South Carolina State University Jazz Hall of Fame in 1998, an honor he has said was especially gratifying for him because he credited the SCSU music program with keeping jazz alive in the state and being one of the few resources available to young musicians interested in jazz.

He also received the state of South Carolina's highest artistic honor, the Elizabeth O’Neill Verner Governor’s Award for the Arts, in 2003 in the Individual Artist category. He was honored with a resolution passed by the S.C. House of Representatives in 2002 “for his extraordinary contributions to the world of jazz music and to congratulate him on his outstanding career and accomplishments."

In addition, Pearson was honored at the Kennedy Center for the Arts during the District of Columbia Jazz Festival. He has also been honored by New York City's posh Dizzy's Club, named for late jazz legend Dizzy Gillespie, at the Lincoln Center for the Perfoming Arts.

Pearson inspired countless others during his 32 years as a music educator in Bamberg, Clarendon and Orangeburg counties, including 14 years with the Denmark-Olar school district. He also served as band director in the Bamberg-Ehrhardt school district and headed up the band program in Clarendon County.

“Everything that takes you on a journey through music is essential to your development as an artist. I was raised by two loving and completely supportive grandparents who seized every opportunity to help me direct my energies and talents towards the arts, especially music,” Pearson said.

“My mother was a music teacher and professional pianist that taught in the Bennettsville, Clarendon County public schools. My father was a lawyer and aspiring vocalist that in his spare time sang with a local barbershop quartet that he helped organize,” he said.

Pearson is grateful to have been awarded the state’s Order of the Palmetto.

“For more than 40 years, I have been working to place the state of South Carolina and her very rich and wholly unique jazz music history on the global stage. I wanted the world to know what we have created and continue to create here," he said.

Pearson referenced "Gem of the Ocean," a play by American playwright August Wilson, which used the tenets of jazz ensemble playing as a way to carve out a creative space for its African-American characters, in his quest to preserve jazz in South Carolina.

“Gov. Nikki Haley recognized my efforts and came to understand my mission of keeping an art form alive. I will forever be grateful for her support and vision for the future of our ‘Gem of the Ocean.'"

PennyWise Episode 5: How to Prioritize Your Debt Payments

Why masks could still be necessary in 2022

Why masks could still be necessary in 2022

The best dog breeds for families with kids

The best dog breeds for families with kids

'People call me just about every day': Bowman man continues handiwork at 84 with smile

Celebrated jazz musician Skipp Pearson is pictured as a child in his native Orangeburg. Pearson, who is pictured left of the child with the cake, was awarded the Order of the Palmetto, South Carolina’s highest civilian honor, on Saturday for his more than three decades of work to keep jazz alive in South Carolina as an educator and entertainer.

Master saxophonist and Orangeburg native Skipp Pearson is pictured in an Orangeburg studio at the age of 20.