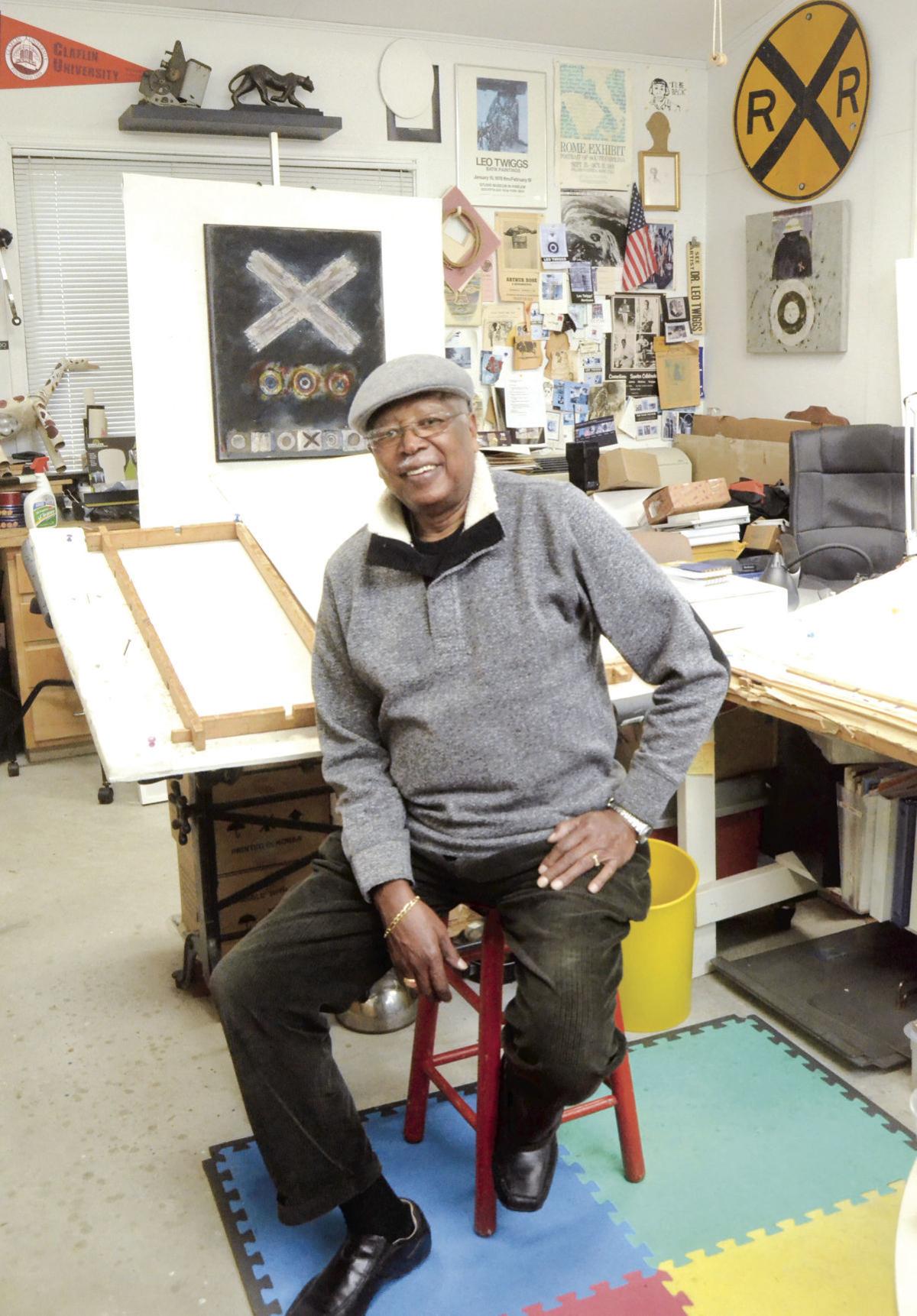 Keeping busy, local artist Dr. Leo Twiggs was recently interviewed for "CBS Sunday Morning" and got word that one of his paintings had been accepted by a national museum in Washington, D.C. 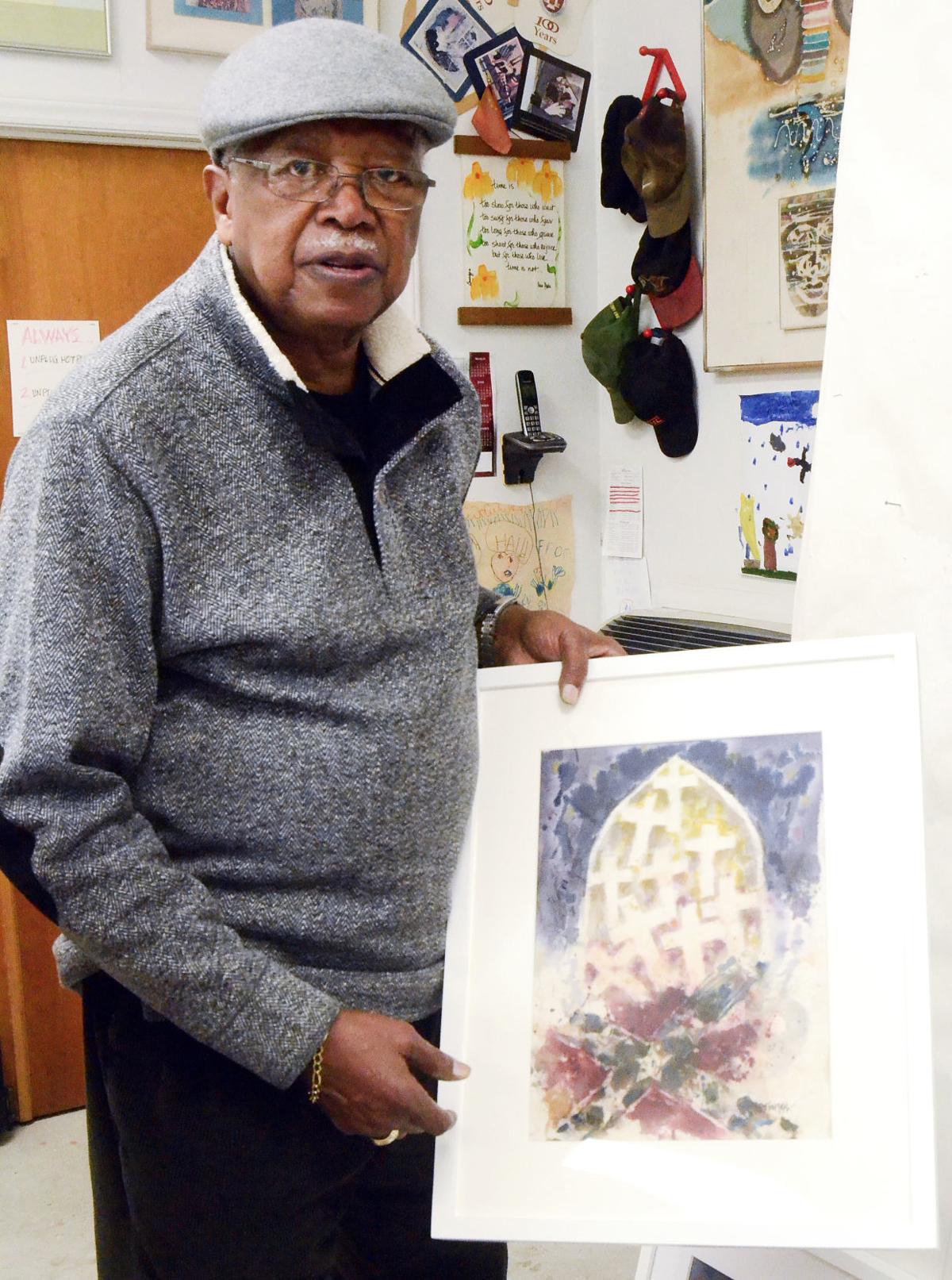 Twiggs displays a piece from a new series he is working on, "The Nine," which focuses on the Charleston church shooting victims themselves. 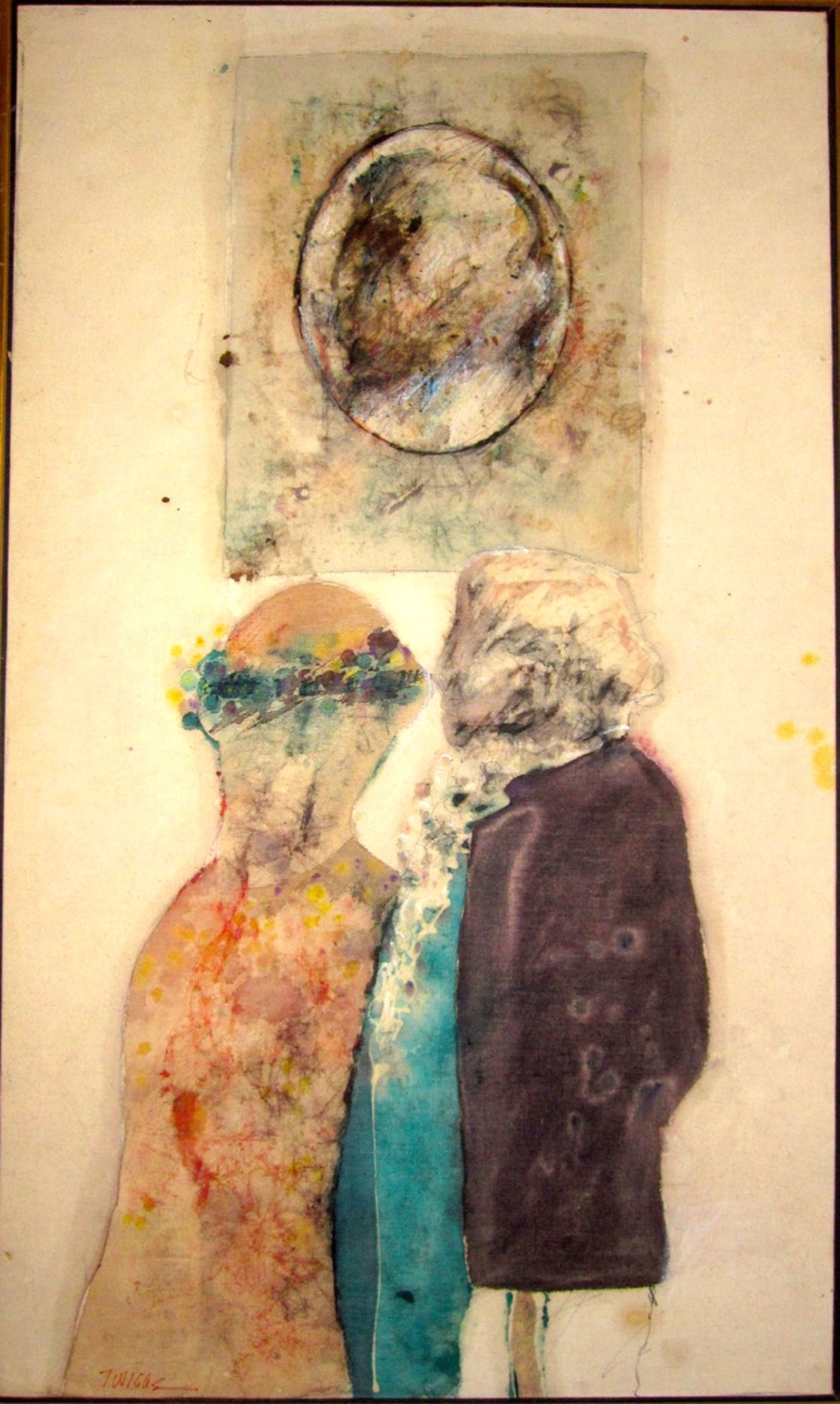 Dr. Leo Twiggs' painting “Ancestor Image” has been accepted by the National Museum of African American History and Culture in Washington, D.C. It was donated to the museum by Dr. John Fleming, who purchased it from Twiggs in the early 1980s. 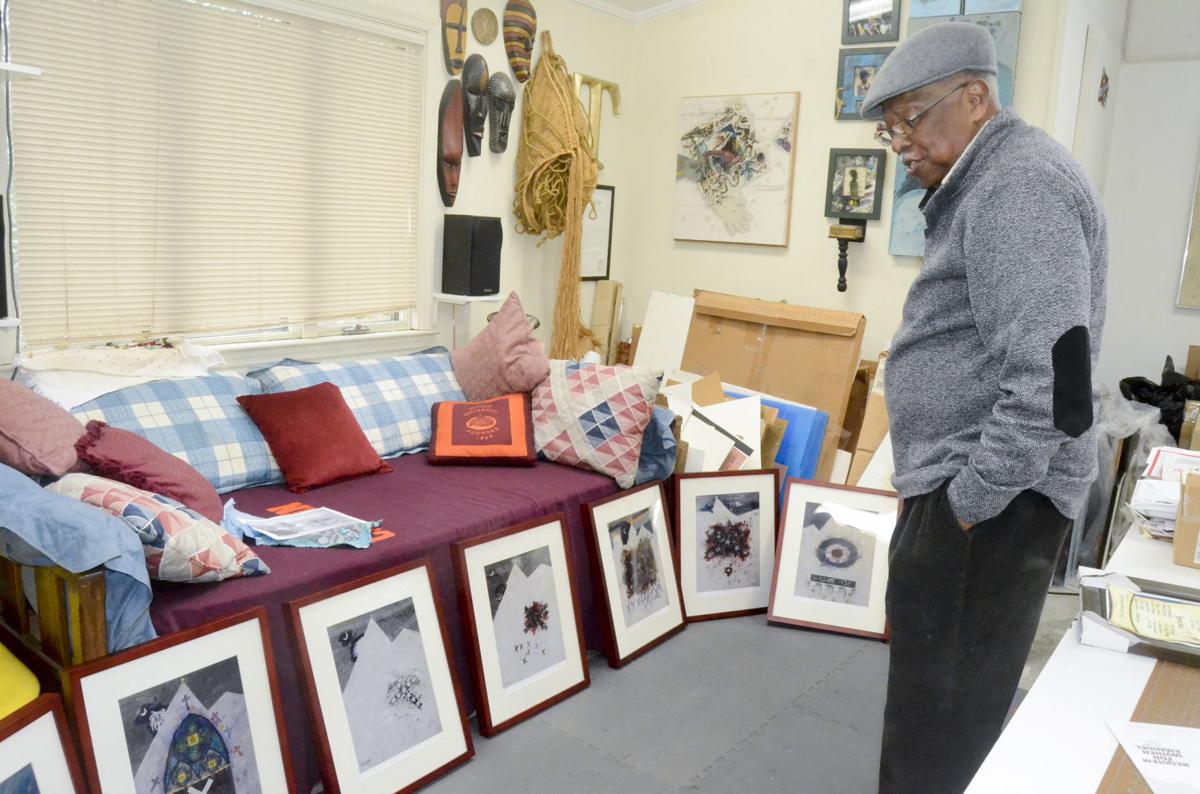 Dr. Leo Twiggs looks over several of his paintings.

It’s a busy and exciting time in the career of Orangeburg artist Dr. Leo Twiggs.

After gaining national attention for his “Requiem for Mother Emanuel” series — created after the June 17, 2015 shootings of nine people at Emanuel AME Church in Charleston — he has seen the paintings displayed in several galleries.

Then CBS came knocking for an interview. And, he got word that another one of his paintings had been accepted for display in a national museum in the nation’s capital.

“I was interviewed by CBS when they were down here covering the (Dylann) Roof trial,“ Twiggs said.

Before that happened, a CBS crew was in Greenville working on another story. A CBS producer happened to see one of Twiggs’ paintings in Greenville’s Hampton III art gallery.

“One of the (CBS) guys there asked ‘Who’s the fellow who did this painting?’” Twiggs said. “And they told him who I was and luckily, (the gallery owner) had all this other stuff,” including several pieces from the “Requiem for Mother Emanuel” series, on display.

After the CBS crew returned to South Carolina to cover Roof’s federal trial, they eventually came to Orangeburg to interview Twiggs for the CBS Sunday Morning program.

“When they came down, the Roof trial was postponed for a time,” the artist said.

The crew came to town and spent all day talking to Twiggs and shooting footage.

“They set up all this equipment in here. I’ve never seen so much stuff,” he said.

But Twiggs showed them more than just his studio; he also showed them some of his sources of inspiration.

“I talk in my work about crossings, that if you take the red from around the (Confederate) flag and (take) the stars off, it’ll look just like a railroad crossing (sign)," he said.

He took the CBS crew to the site of an old-style railroad sign he had located, which they also shot footage of.

“And so, it’s going to be interesting to see what turns up,” Twiggs said.

The footage is currently being edited, he said, “and they’ll let me know when they’ll show it.”

With Roof’s state trial coming up in the near future, Twiggs suspects it will be soon.

Another development in his career is the recent acceptance of one of Twiggs’ paintings for the new National Museum of African American History and Culture in Washington, D.C. The painting, “Ancestor Image,” was donated to the museum by Dr. John Fleming, director in residence of the National Museum of African American Music in Nashville, Tennessee.

In the early 1980s, Twiggs was involved with the South Carolina State Museum board. Wanting to represent African American art in the new museum, the board asked Twiggs to suggest someone to talk to them about the task. Twiggs suggested Fleming, who was at that time the director of the Cincinnati Art Center.

“And while he was down here, he came by my studio and saw this painting and liked it and purchased it,” Twiggs said.

A recent email from Fleming let Twiggs know that he had donated the painting to the national museum and it had been accepted.

The museum “doesn’t just take anything. They have a cadre of curators out there, and those curators go around and they look at things,” Twiggs said.

The process is very selective, he noted.

“You can’t just give stuff to the new museum,” he said, laughing.

The piece itself shows two people in colonial American garb looking at a painting.

“When I did this piece, I was just exploring a lot of ideas,” Twiggs said. “The whole idea was to have these two figures standing there, and then a figure that looks like (the male figure), but it’s probably a picture of his ancestor."

“And I was exploring the whole idea of, in America, even George Washington had an ancestor that probably looked like him,” he said. “And so I just played around with this kind of colonial ancestor image.”

The painting was unusual for Twiggs in that it’s not part of a series.

“It’s kind of a standalone painting,” he said.

His “Requiem for Mother Emanuel” series has received national acclaim and attention and has been shown at several galleries. Currently, it is on display at the Mint Museum in Charlotte, North Carolina.

The first two pieces were purchased by collectors early on. The third piece was donated to be auctioned for Charleston’s Spoleto Festival.

By this time, he was convinced by the woman who had solicited the donation to make the series a nine-piece cycle.

The next three paintings were quickly sold to collectors. Concerned that the paintings were only to be displayed in private homes where the public couldn’t view them, Twiggs’ gallery director suggested contacting museums to see if they were interested in purchasing any of the rest of the series.

But before that could happen, The Johnson Collection in Spartanburg bought all three. Then they sent letters to the owners of the other six paintings in the series asking to display them together.

“And they all agreed,” Twiggs said.

The series was complete again.

After that, the Mint Museum expressed interest in showing the series following racial unrest in Charlotte. The series is now on display there through Feb. 22. The paintings will then go back to The Johnson Collection. In September, the series will go to Auburn University’s museum for a time.

He is glad that the series is being so widely shown, but was concerned that it hasn’t been seen locally as a whole. To that end, he framed digital photo prints of all the paintings and will soon display them at his church, New Mount Zion Baptist Church in Orangeburg.

He said he is now working on a new series, “The Nine,” which focuses on the Charleston church shooting victims themselves.

Twiggs said he first knew that he wanted to be an artist when he was a young man in the small town of St. Stephen.

“It started, I think perhaps, maybe in eighth grade,” he said. “I used to copy cartoons, like all kids do.”

One day he rode his bike to his school and lay upon the ground, drawing the building on the back of a piece of wallpaper. Later, he displayed the drawing at a multi-school fair and field day. He was encouraged by the positive attention he received.

He worked as a janitor after school, then later as a projectionist at a local theater, and he would draw posters and signs to be displayed there.

The young man who ran the projector had trained Twiggs to do the job for him so he could go down to the lobby and “talk to girls,” Twiggs said. Eventually, Twiggs was offered the job. At first, the manager would sit with him in the projection booth.

“The night I ran solo was the night my father died,” Twiggs said.

One of his brothers came up to the booth and told him the news.

“And I couldn’t go. I couldn’t go home because I was running the projectors. I’ll never forget that,” he said.

After working as a projectionist from 10th through 12th grade, Twiggs decided he wanted to go to college.

“But I had no way to get there because we were subsisting on a small Social Security check. My grandmother helped out,” he said.

But a local white minister helped introduce him to Claflin College (now University). The man gathered all of Twiggs’ belongings and drawings and drove him to Orangeburg, where he and another prominent Orangeburg Baptist minister took him to the college.

“The two of them brought me to Claflin, and J.J. Seabrook was the president,” he said.

Seabrook gave Twiggs a work-study scholarship; along with his studies, he would clean the college’s art studio. But his mother still had to cover the balance of the tuition.

“And so what she did is, she sold a cow and got tuition,” he said.

Starting at Claflin in 1952, Twiggs studied art under Dr. Arthur Rose. That year, Rose had created the only art program in South Carolina available to African Americans.

After the first year, Twiggs gathered his things and came home, worried that he wouldn’t be able to pay for another year of college. His mother had other ideas.

“And I said, “I don’t have any money for the second semester, Mom.’”

“I went back and finished that semester,” Twiggs said. “And I made all A’s both semesters.”

After that, he was able to pay his way with a job as a projectionist at Orangeburg’s Carolinian Theatre, which is now the site of Stevenson Auditorium and Orangeburg City Hall.

He received further instruction at the Art Institute of Chicago, then earned a master’s degree from New York University. He was the first African American to receive a doctorate in art education from the University of Georgia.

Returning to Orangeburg in 1964, he taught at South Carolina State College (now University), where he formed the art department and was instrumental in starting and running the I.P. Stanback Museum and Planetarium.

It was during this time that Twiggs began to explore batik, a traditional African method for decorating fabric using dye and wax. Compared to the boldness of oil and acrylic painting, batik is more understated. It whispers, he said. But he prefers it that way.

Today, Twiggs continues to paint and serves as Distinguished Artist in Residence at Claflin University.

More about Orangeburg artist Leo Twiggs and his works

Leo Twiggs among 5 finalists for award by Gibbes Museum

CHARLESTON -- Five finalists have been named by the Gibbes Museum of Art for the 2018 Society 1858 Prize for Contemporary Southern Art, includ…

New massacres a jolt for clergy who coped with past attacks

As Americans reel from back-to-back massacres in Texas and Ohio, religious leaders who have experienced violence in their houses of worship ar…

Keeping busy, local artist Dr. Leo Twiggs was recently interviewed for "CBS Sunday Morning" and got word that one of his paintings had been accepted by a national museum in Washington, D.C.

Twiggs displays a piece from a new series he is working on, "The Nine," which focuses on the Charleston church shooting victims themselves.

Dr. Leo Twiggs' painting “Ancestor Image” has been accepted by the National Museum of African American History and Culture in Washington, D.C. It was donated to the museum by Dr. John Fleming, who purchased it from Twiggs in the early 1980s.

Dr. Leo Twiggs looks over several of his paintings.