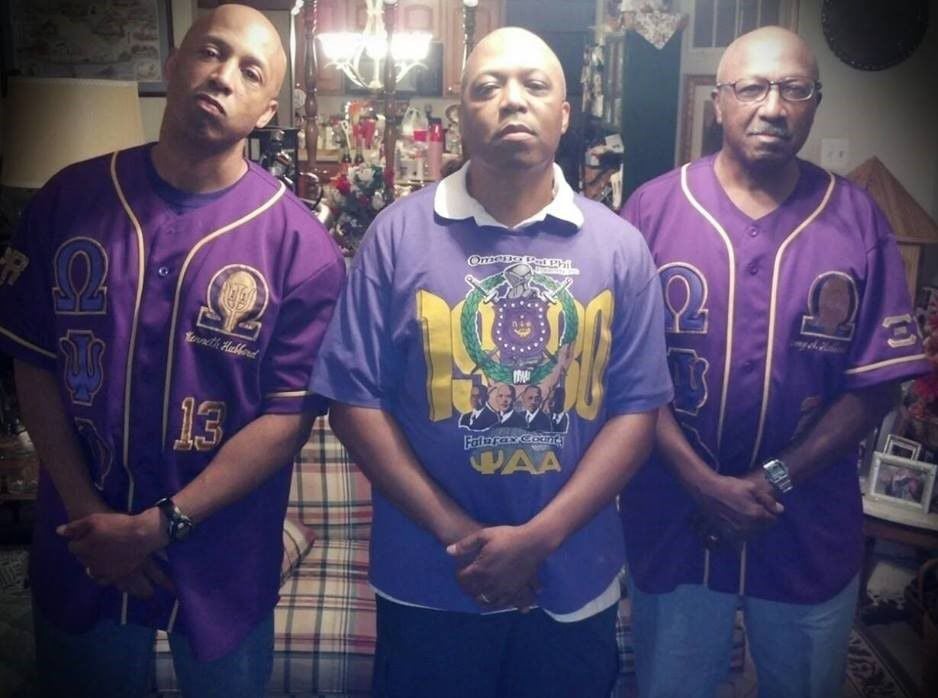 Kenneth Hubbard, Jerry Hubbard Jr. and Jerry Hubbard Sr. are pictured in their fraternity jerseys. The late Hubbard Sr. said, "What I am most proud of is the fact that my two sons along with me were able to serve our country and overcome racial obstacles that Blacks were encountering during the time we were serving." 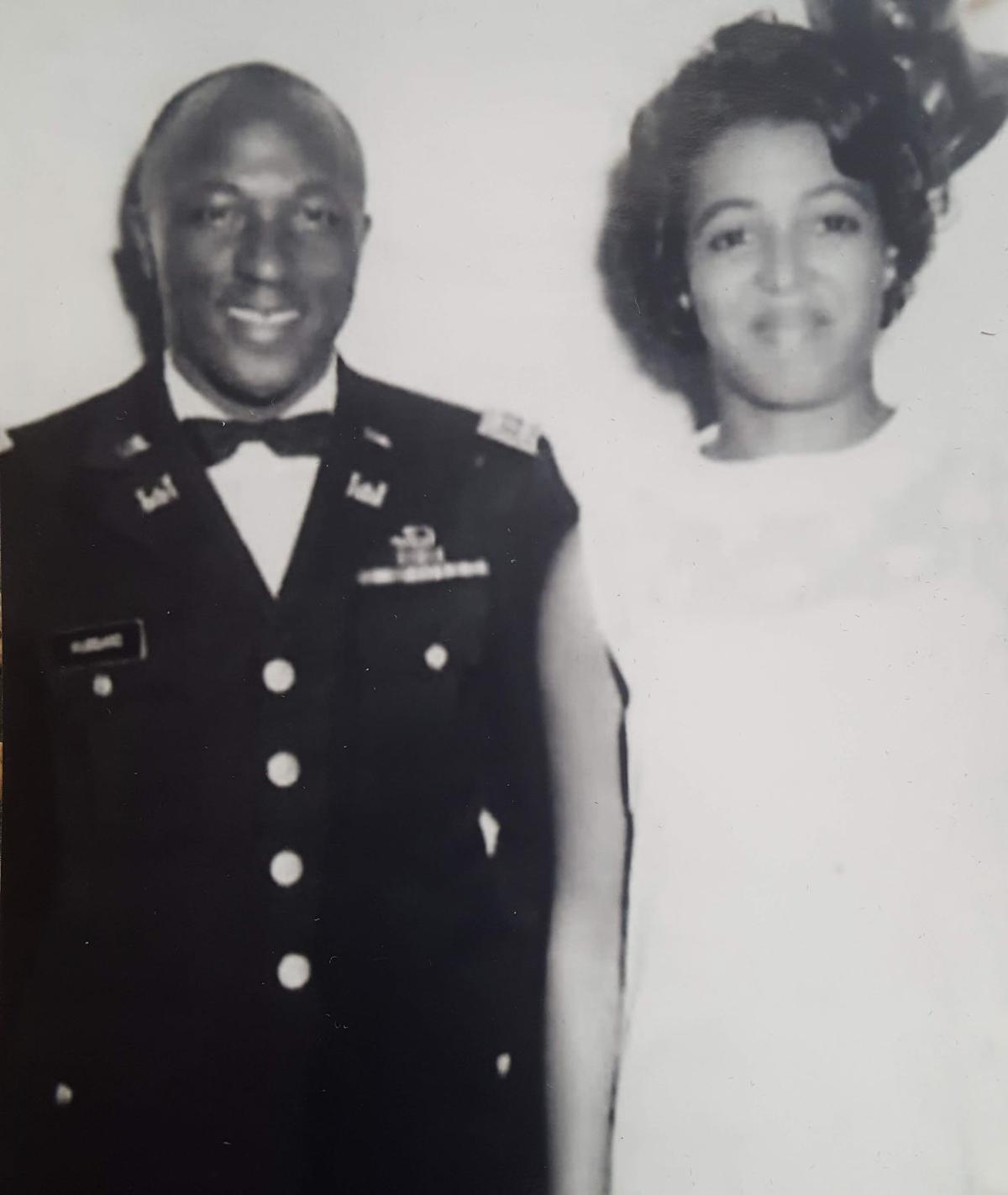 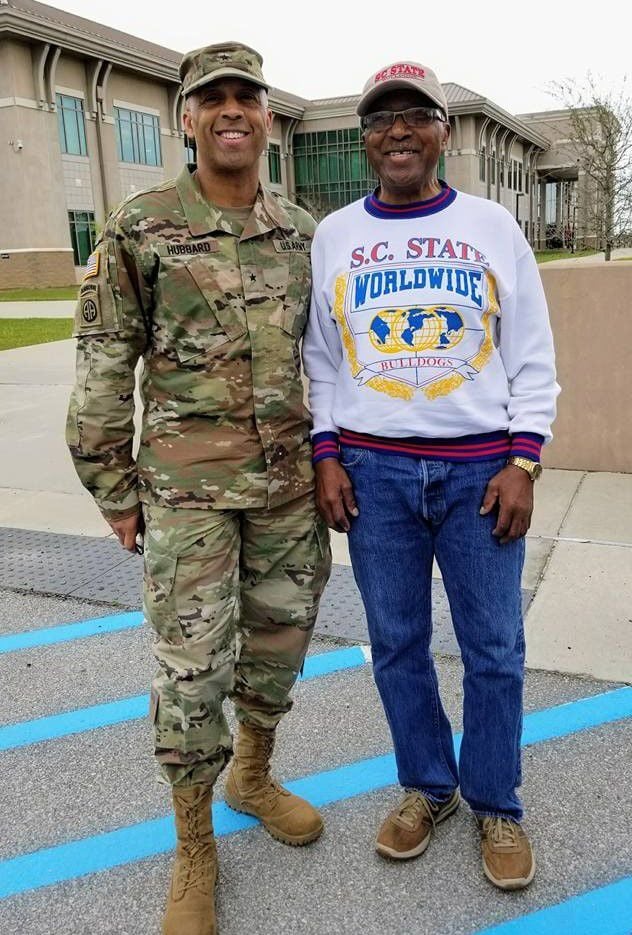 Kenneth and Jerry Hubbard Sr. are pictured. Queen Brailey says the Hubbard family's, “legacy of service and self-sacrifice has brought honor and pride to our family, the SCSU ROTC program and the Orangeburg community."

It all began one fall while young Jerry Hubbard stood with his family watching the processions of homecoming parade participants pass by. In fact, when his eyes beheld those neatly-pressed military uniforms and his ears heard the cadence and the marching boots of the South Carolina State College ROTC cadets, a spark was ignited in him.

Little did he know at the time that his inspiration would set in motion a family legacy of military service for himself and his two sons.

“Being from Orangeburg, we attended all of State’s homecoming parades. I was impressed with the ROTC Cadet Corps marching in the parade in their fine-looking uniforms and I said one day, I want to wear one of those uniforms,” said Hubbard.

After graduating Wilkinson High School, Hubbard entered college and joined the ROTC program. He later received a commission as a 2nd Lieutenant in the U.S. Army Corps of Engineers in 1960 from SCSC.

“We were encouraged by the university and the ROTC program to give our best to our country,” said Hubbard, who married his high school sweetheart, Miriam Brailey, upon graduation from college.

Stories of Honor 2021 -- the program and sponsors

STORIES OF HONOR: From aircraft mechanic in Vietnam to top-flight flight instructor

Hubbard shared that although he had to face some obstacles as a black man in the military during the civil rights movement, he persisted in his pursuits to become an officer. His first duty assignment was with the famed 82nd Airborne Division of Ft. Bragg, North Carolina. He served two tours in Vietnam and achieved the esteemed rank of colonel. Initially, he served as the Logistical Command Critical Engineer Combat Support Materials Officer and later was responsible for providing engineering and logistical support for a major engineering depot. Hubbard went on to command combat engineers at the battalion and brigade level.

During his 30-year military career of honorable service to the United States, Hubbard mentored many black Army officers from SCSC and other institutions. Hubbard was decorated with numerous medals including two awards of the Legion of Merit and is a proud member of the South Carolina State University Military Hall of Fame. Hubbard served from 1960-1990 and currently resides in Virginia.

Hubbard and Miriam (deceased) had a daughter, LaShonda (deceased), and two sons, Jerry Jr. and Kenneth. Their eldest son, Jerry Jr. was born in Verdun, France, where the couple was stationed at the time. Jerry Jr. traveled wherever his father’s career took him, but ultimately became an SCSU Bulldog who followed in his father’s footsteps as he too enrolled in the ROTC program. He was awarded a three-year Army ROTC scholarship and excelled in his studies, ultimately being honored as a distinguished military graduate in 1984.

Upon graduation, Jerry Jr. was commissioned as an Army lieutenant in field artillery. He married Tami Clark, the daughter of another Army veteran. He served in various positions from battery commander to division-level staff positions and commanded his battery in war as a part of the liberating force in Operation Desert Storm. Once back stateside, he continued his active-duty career by developing training for new recruits. After completing his tour with the Army Training Center, he joined a reserve brigade in Indiana, preparing reserve units throughout the state for deployment to southwest Asia. By the end of his military service, Jerry Jr. achieved the rank of U.S. Army major.

Jerry Jr. and Tami are the parents of two daughters, Sara and Avery, and have settled in Indianapolis, where Jerry Jr. plans to be working as a civilian for the next 20 years, enjoying time spent with his family. He served from 1984-2004.

Like Jerry Jr., Kenneth, Hubbard’s younger son, spent much of his childhood traveling from place to place. The family resided here in Orangeburg during Hubbard’s deployment in Vietnam, allowing Kenneth to attend SC State, which he did on a four-year Army ROTC scholarship. He, like his older brother, completed his studies with honors as a distinguished military graduate. He was commissioned as a 2nd lieutenant air defense artillery officer in the U.S. Army. Following in his father’s footsteps, Kenneth’s first duty assignment was also with the 82nd Airborne Division at Ft. Bragg.

During his tour as a platoon leader, he led his soldiers into combat, successfully liberating Panama from the dictator Manuel Noriega. Kenneth deployed to conflicts in Bosnia-Herzegovina and the Persian Gulf, as well as participating in combat missions in Iraq and Afghanistan. He ended his career as a finance officer after obtaining his master’s degree in business administration from Syracuse University.

Kenneth was promoted to the highly esteemed rank of brigadier general and served 32 years in the Army from 1986-2018. Kenneth has been highly decorated, and he is a distinguished member of the SCSU Military Hall of Fame along with his father. He and his wife, Dr. Stephanie Harrison, have a son, Christian, and they also reside in the state of Indiana.

“What I am most proud of is the fact that my two sons along with me were able to serve our country and overcome racial obstacles that Blacks were encountering during the time we were serving,” said Hubbard.

“One example of our accomplishments is the fact that my youngest son made brigadier general, which was an outstanding feat in the face of the challenges he encountered en route to this position,” he said.

Hubbard said that not only did he get to realize his childhood dream of becoming a finely-dressed ROTC cadet marching in State’s homecoming parades, his life example of pride and service inspired his sons to follow in his footsteps.

The Hubbard father and sons were nominated by Queen Brailey, whose husband, Nicholas “Nick” L. Brailey (deceased), served in the U.S. Air Force and was a graduate of SCSU. After his honorable release from active duty, Brailey returned home to run VFW Post #8166 here in Orangeburg for four years and retired from SCSU postal service. Mr. Brailey and Miriam Brailey Hubbard were siblings.

“While Col. Hubbard was overseas and his wife, Miriam and their two sons were here, Nick and I served as surrogates to them, doing little things to help them out,” said Queen, who feels like these men should be recognized for their service.

“Even though many members of the Hubbard and Brailey families have served honorably in different branches of the military, I chose to nominate the Hubbards this year. Their family legacy of service and self-sacrifice has brought honor and pride to our family, the SCSU ROTC program and the Orangeburg community,” she said.

Retired Col. Jerry Hubbard passed away following a short illness before the publication of this article.

The Hubbard family thanks The Times and Democrat for honoring the service of this great soldier. He paved the way for his sons and so many more service members who dedicated their lives to the defense of this great country.

They also wish to express their gratitude to all the family and friends for the wonderful tributes and honors paid to him through prayers, cards, calls, e-mails and many other acts of kindness.

The impact Col. Hubbard had on everyone he touched will live on forever.

Survey: 1 In 2 adults still compete and argue with their siblings

The best soups to eat when you feel sick

The best soups to eat when you feel sick

Americans have 'cooking fatigue' after the pandemic

Americans have 'cooking fatigue' after the pandemic

The T&D Stories of Honor program is in its third year. The program accepts nominations of local veterans and active-duty military personne…

Kenneth Hubbard, Jerry Hubbard Jr. and Jerry Hubbard Sr. are pictured in their fraternity jerseys. The late Hubbard Sr. said, "What I am most proud of is the fact that my two sons along with me were able to serve our country and overcome racial obstacles that Blacks were encountering during the time we were serving."

Kenneth and Jerry Hubbard Sr. are pictured. Queen Brailey says the Hubbard family's, “legacy of service and self-sacrifice has brought honor and pride to our family, the SCSU ROTC program and the Orangeburg community."