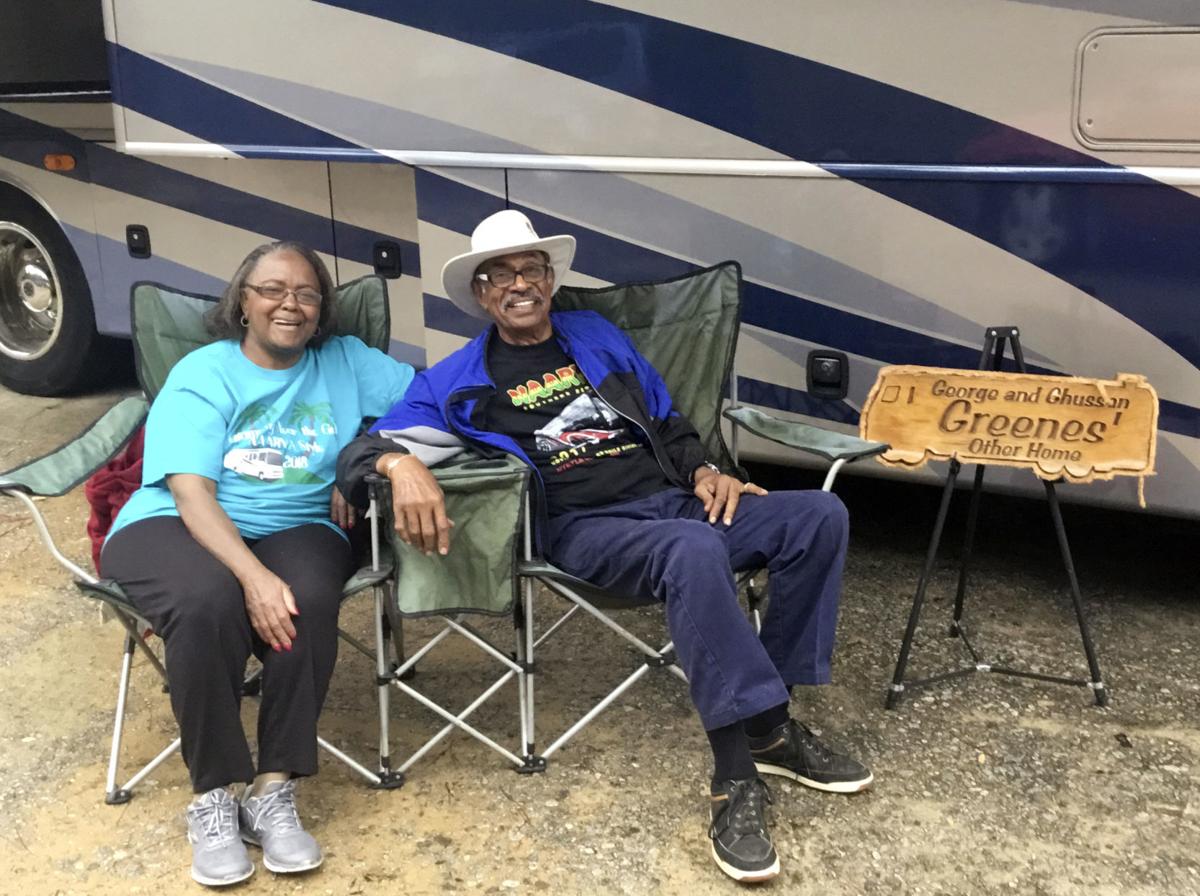 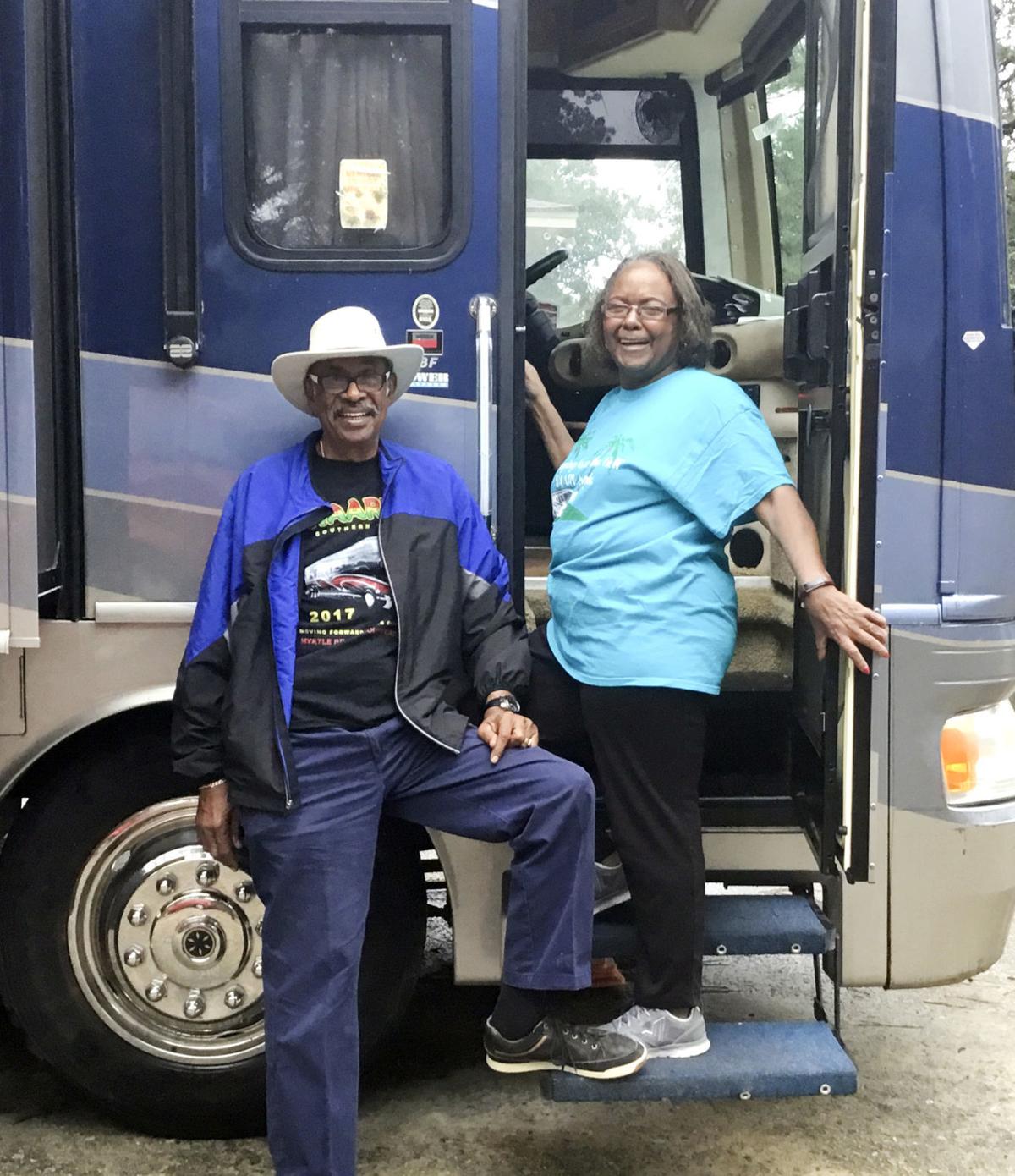 George Greene, with wife Ghussan, said he became interested in the RV lifestyle when his cousin from Atlanta came to a homecoming game at South Carolina State University. They parked on the campus and entertained family and friends with food, drinks, music and a television. 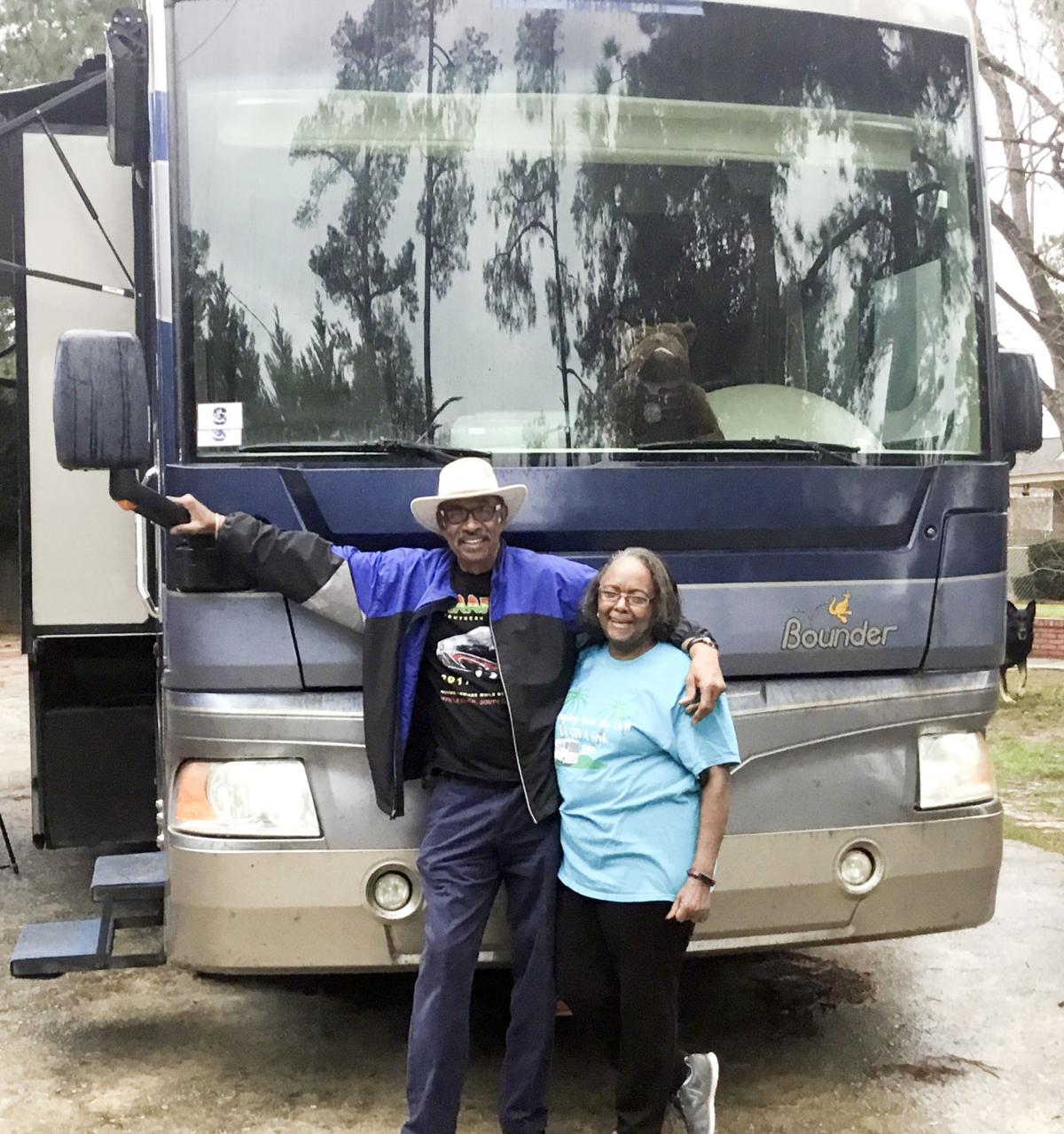 Over 20 years of RV traveling, Greene said that he and his wife were often the only blacks in the RV park. But “the people always treated us with kindness,” he said.

George Greene, with wife Ghussan, said he became interested in the RV lifestyle when his cousin from Atlanta came to a homecoming game at South Carolina State University. They parked on the campus and entertained family and friends with food, drinks, music and a television.

Over 20 years of RV traveling, Greene said that he and his wife were often the only blacks in the RV park. But “the people always treated us with kindness,” he said.

In the history of recreational vehicles, few blacks took interest in the world of RV traveling and enjoying the vast lands of America, although that is now changing.

When the RV lifestyle got started in America, black America was in a struggle to obtain the basic rights of being citizens and having the same opportunities that the whites enjoyed.

There are several reasons for the lack of interest for this style of living by black America. One of the main points can be traced back to the fact that blacks got a late start because of the role in which they arrived in America; they were brought to this continent by force and not by their own will. The years of slavery held the blacks back from the freedoms that the whites enjoyed and lived.

Also, when the Civil War ended and the blacks gained the right to citizenship, the sudden impact of this realization did not include a manual on how to adapt; to earn income; to obtain food, shelter and clothing; nor with religious and spiritual guidance and other duties of being a free citizen. They lived a life of “on-the-job training” in order to survive.

While making this adaptation, they had to learn how to live in peace and harmony with the whites. Also, the whites had to be accepting of this new group of citizens who were former servants. Some of the whites did, but many of them would not and did not accept this fact.

In 1899, while visiting Charleston, American journalist, publisher and diplomat Walter Hines Page wrote to a friend about his stay. Hines said, “I can’t find white men here whose view of the Negro has essentially changed since slavery. Booker Washington told me last week that the result of his work of which he is proudest is the fast-changing attitude of the white man -- the Southern white man. But he hasn’t changed here -- not a whit.”

The history of the recreational vehicle is said to have begun in the year 1910. During this time, there were very few paved roads and no highways in any state for travelers to connect from one location to another in an easy manner.

Camping had been a part of life’s enjoyment for centuries. But 1910 brought about the world of auto camping vehicles whereby one could go where they wanted to go and when they wanted to go. All before then, people camped in private rail cars that were pulled to sidings along train routes. The vessels of this new way of enjoying life were known as “auto campers” or “camping trailers.” Today, auto campers are known as RVs.

In the 1920s and 1930s, more and more roads were being paved all across America. The industry started making aircraft-style campers that came equipped with beds, dinettes, electricity and water. Camping sites and parks began to open up in every state. After World War II, the RV industry flourished.

Throughout those years in RV history, the vast majority of blacks did not and could not take interest into this type of social enjoyment and traveling this great land. During the period from 1910 to 1970, blacks in America were still in a struggle to be accepted as having full citizenship, with all of the rights and privileges of white America. Civil rights, voters’ rights and equal education had not been gained as a part of being a free citizen.

Such factors became a priority in order to enjoy the freedoms that white Americans lived. Yes, the opportunity of taking your family and friends on a recreational vehicle across South Carolina or America would have social and educational satisfactions just like the whites.

The idea for an organization of African American recreational vehicle owners was conceived by a small group of acquaintances in the summer of 1993. This group arrived at Winton Woods Campground in 52 rigs. Five clubs were in attendance: the Buckeye Explorers of Dayton, Ohio; the Free Rollers and Sun Seekers of the Detroit area; Derby City Campers of Louisville, Kentucky; Columbus Camper Club of Columbus, Ohio; and the host club, the Ohio Buckeye Road Runners of Cincinnati, plus one family from Meridian, Mississippi.

They laid the groundwork for was to become the largest gathering of African American RVers ever. That organization became known as the National African-American RVer’s Association.

“The throngs filling campgrounds across America this weekend will include hardy outdoors types and those who prefer creature comforts, but they’ll have at least one important thing in common: Nearly all of them are white," the publication stated.

The publication went on to say that a small but committed group is trying to change that by growing a generation of black campers, one person at a time.

"The National African-American RVer’s Association is composed almost exclusively of black people who camp, although it includes a few whites and Hispanics. The group doesn’t have much money to solicit new members," the publication stated.

The story said that the group always holds its biggest national gathering in July when schools are out " so children and grandchildren can come along."

"We cater mostly to the family so that our young people will be able to grow up understanding the outside world and seeing the creation that God has created for us and how beautiful it is," the Rev. John Womack of Boston, the group’s president, was quoted as saying.

"Getting more blacks into the woods would mean breaking decades of stereotypes and overcoming a long-standing leeriness that members say many have about camping. Bad things happen to black people in the woods, the story goes, and they can’t afford recreational vehicles," the publication stated.

Orangeburg resident George Greene has been living and enjoying the world of RV traveling for the last 20 years. He said he became interested in this lifestyle when his cousin from Atlanta came to a homecoming game at South Carolina State University. They parked on the campus and entertained family and friends with food, drinks, music and a television.

Greene said he and his wife Ghussan reminisced about this experience. He told her, “I like that kind of living.” From that point up until today, they have owned their RV and have done extensive traveling across America. Oftentimes, he and his wife would be the only blacks in the RV park, he said.

But “the people always treated us with kindness,” he said.

When it comes to the lifestyle of RV living, most of the blacks are older or retired. Greene said that about 10 years ago, he and his wife would meet up with a RV Club in Columbia known as the Columbia Travelers. Then they located another club in Augusta, Georgia, called the Fun Seekers.

As time progressed, black America has gradually moved into this lifestyle that their ancestors could not and did not seek. Today, this lifestyle has no limits.

The 'Burg' in 1875: 'One of prettiest most thriving places in state'

There is not a day that goes by that I am not reading about our great county of Orangeburg from the past. As I absorb this knowledge, I find i…