Biden takes the helm as 46th president: 'Democracy has prevailed'

A day with Superman: Orangeburg 11-year-olds live dream with legendary Doc Blanchard in 1945
0 comments
Share this
{{featured_button_text}}
1 of 4 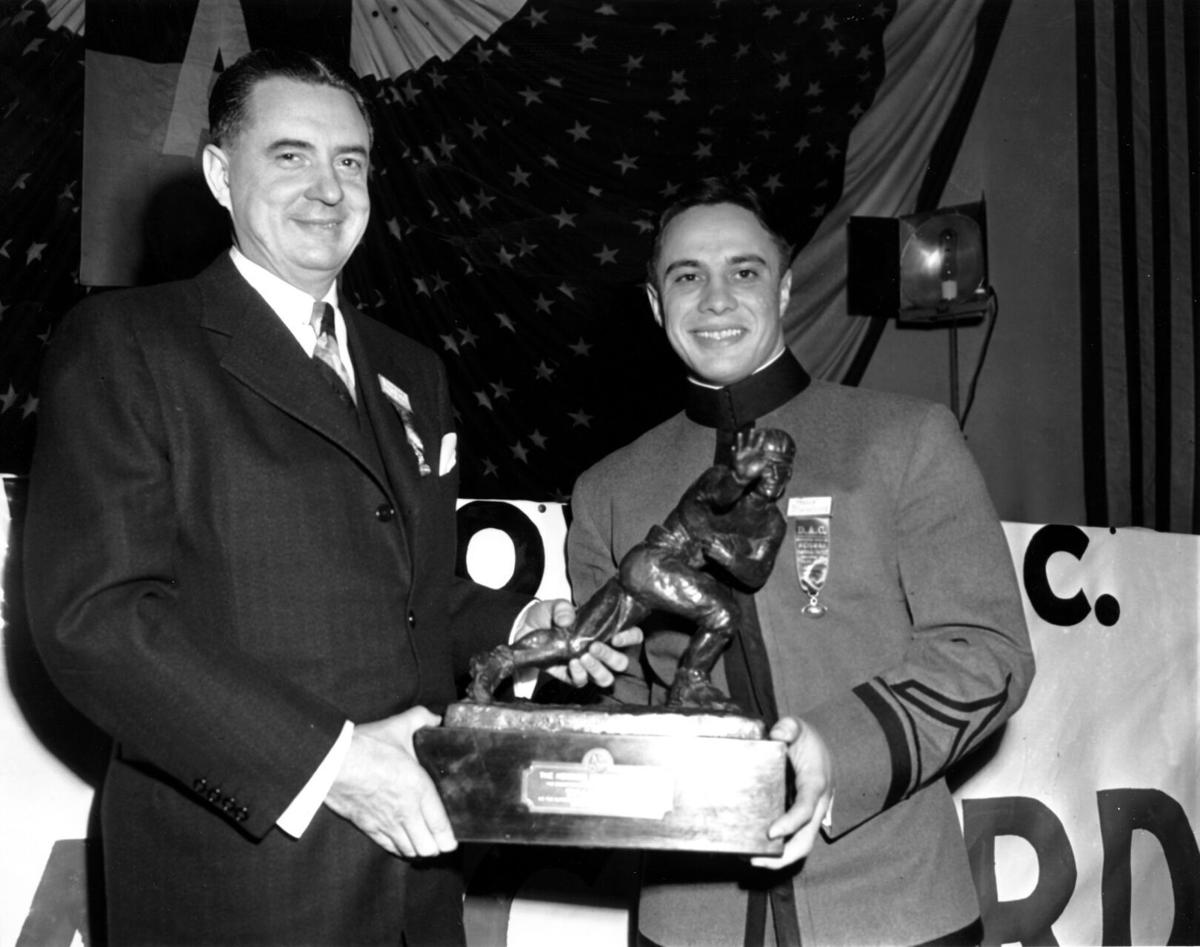 In this Jan. 5, 1946, file photo, Army football team member Felix "Doc" Blanchard Jr., right, gets an advance look at the Heisman Memorial Trophy to be presented to him a few hours later at the Downtown Athletic Club of New York. 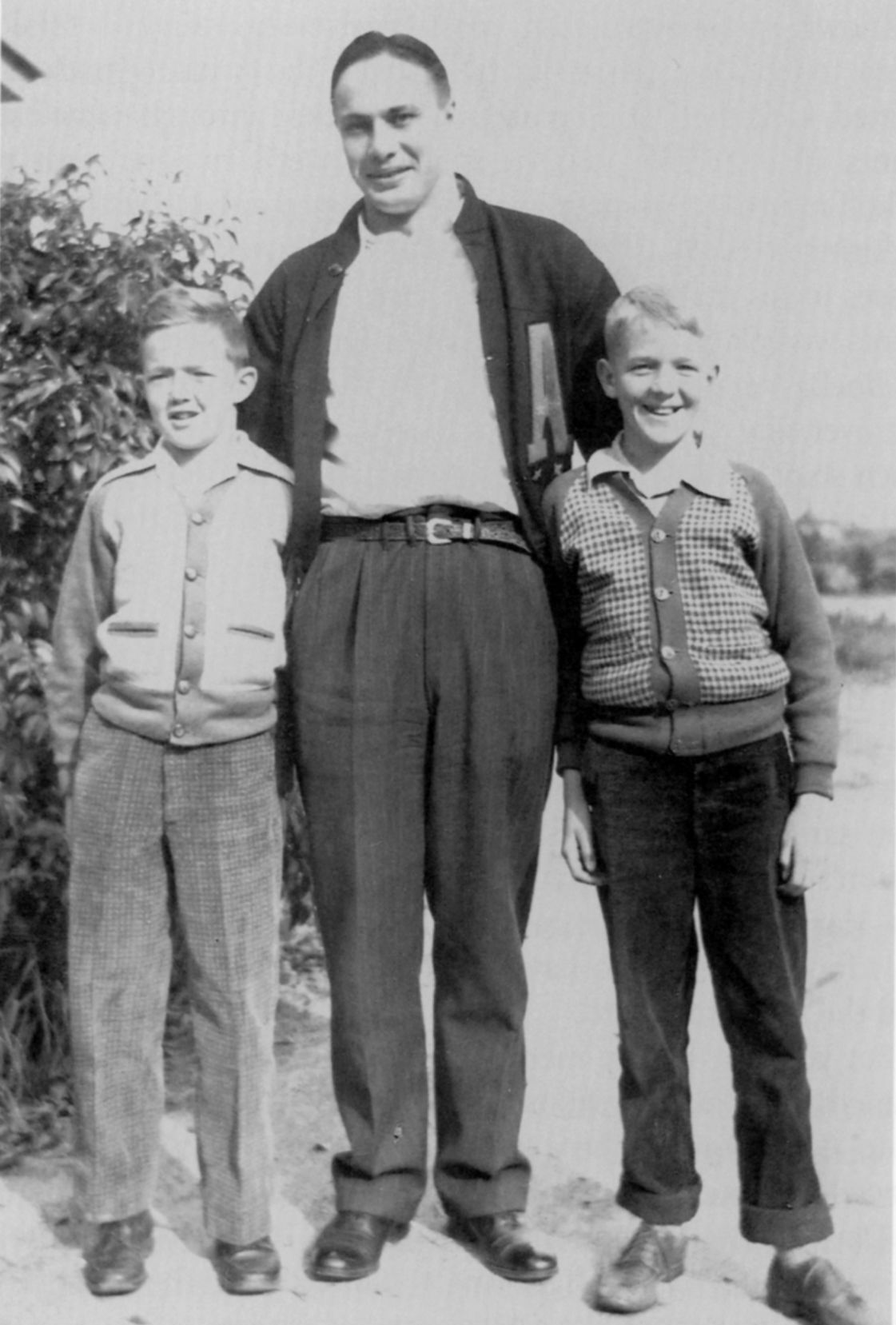 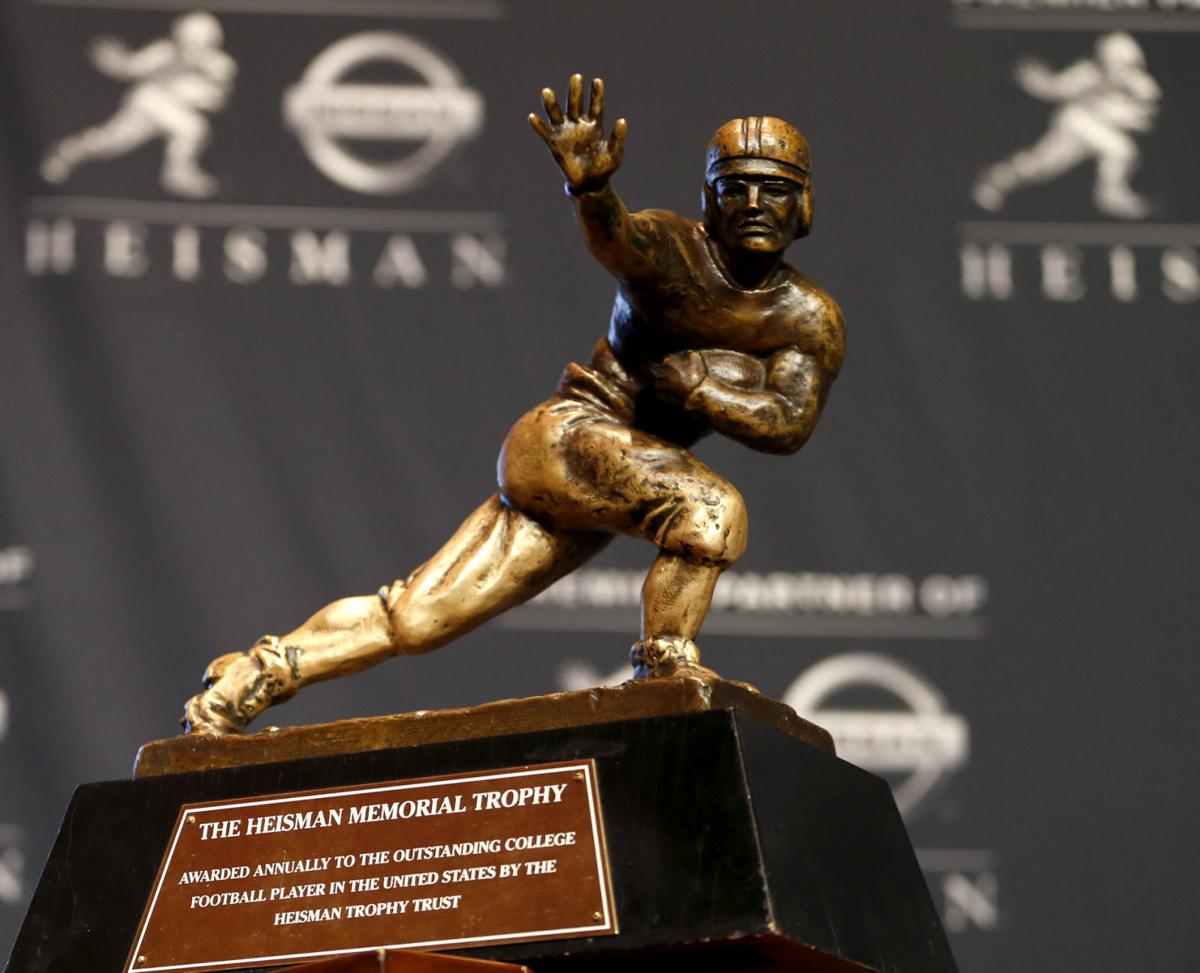 The 2020 Heisman Trophy ceremony is scheduled for Tuesday, Jan. 5, 2021, at 7 p.m. on ESPN. Finalists for this year's award are Clemson QB Trevor Lawrence, Florida QB Kyle Trask, Alabama QB Mac Jones and WR DeVonta Smith of Alabama. Because of the COVID-19 pandemic, the ceremony will happen virtually. ESPN will broadcast the event out of its campus in Bristol, Connecticut. 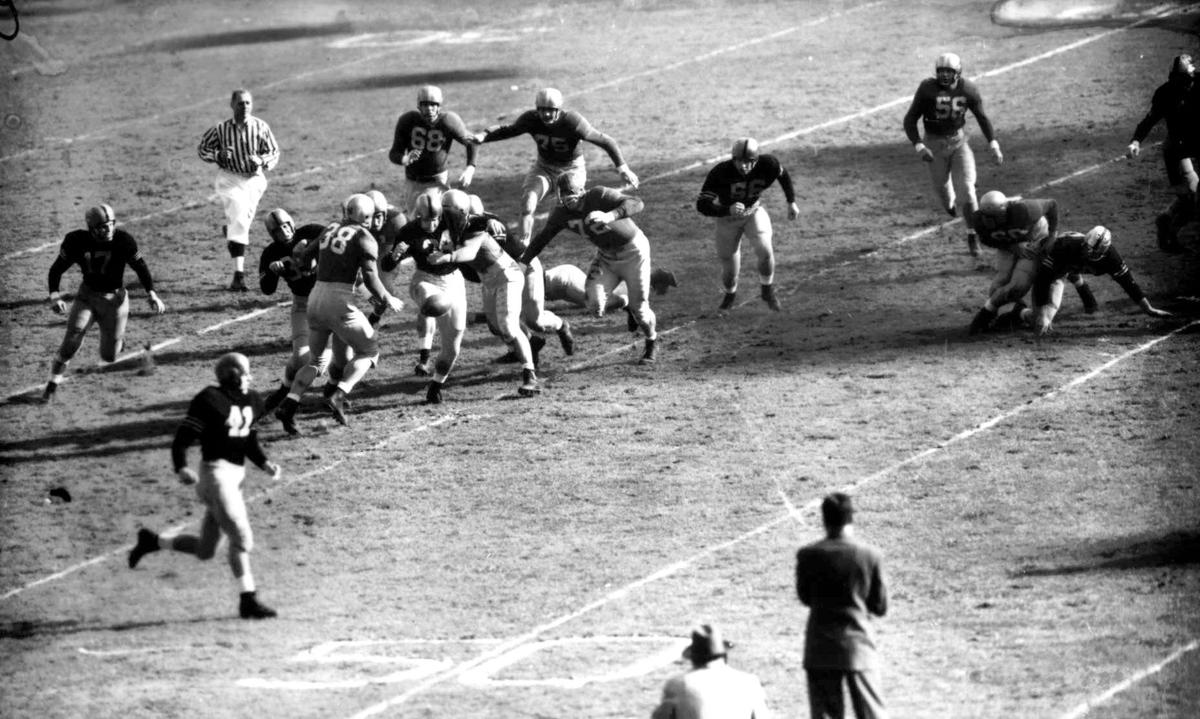 In 1946, second-ranked Notre Dame fights to a 0-0 tie with No. 1 Army at Yankee Stadium to snap the Cadets’ 25-game winning streak. The Irish defense holds Army’s running backs Doc Blanchard and Glenn Davis to a combined 79 yards. In this photo, Blanchard, left background, fumbles the ball, in air, center, in the first period of the famous game.

This article from Orangeburg historian Dr. Gene Atkinson is adapted with permission from a chapter in a book by Tom Summers, a native of Orangeburg and a retired United Methodist minister from Columbia.

In 1945, fabled Doc Blanchard of the West Point football team won the coveted Heisman Trophy as the best college player of the year.

Doc grew up in the small town of Bishopville. Although his family called him Anthony, everyone else called him “Little Doc” in childhood, as his father was one of the town physicians in Bishopville. Later they just called him “Doc.”

But what a sensation he would become on the gridiron. His football prowess was unmatched. He was the offensive fullback, linebacker on defense, and the punter and the kicker for West Point. Opponents would say when Doc carried the ball, he would run over them like they were paper. After West Point’s 1944 game when they trounced Notre Dame 59-0, the opposing Notre Dame coach said, “I have just seen Superman in the flesh. He wears number 35 and goes by the name of Blanchard!”

Doc’s sister would drive him and some of the local boys around town to see the sights or go swimming. However Tom had never gotten to meet Doc as he was off at prep school or in college during those years.

But this day in December 1945 was different. Tom’s aunt had made arrangements for Tom and his first cousin, West Summers, to come up to Bishopville from Orangeburg for the big town celebration for Doc. For you see, Doc had just received the prestigious Heisman Trophy and was now home for the Christmas holidays from West Point. That special day was to be celebrated with a big parade as well as a banquet, not to mention the presence of the governor of South Carolina and many sports luminaries from across the state for all of the festivities.

Doc Blanchard carried a frame of 6 feet tall and weighed 205 pounds. He could run the 100-yard dash in under 10 seconds. During his West Point career, Doc averaged 6 yards per carry on 280 total carries. Because his team piled up such high scores, he was needed for only about half a game. In addition to being a bruising running back, Doc was an outstanding pass receiver, catching seven touchdown passes. He also punted, kicked off and kicked some extra points (many extra points in that day and time were running plays). In his senior year, he averaged over 44 yards per kickoff return — a record that remains today. On defense he played at the linebacker position and still holds the record for yards returned on intercepted passes at West Point.

It’s no wonder that Doc Blanchard received the Heisman Trophy at the end of his junior season in 1945. He had rung up 19 touchdowns and picked up 718 yards in rushing that year. Doc was the first college junior to receive the Heisman award.

In the Army-Navy football game in Philadelphia that year, President Harry Truman and 100,000 fans saw Doc score three times — one of which was on a 46-yard pass interception. For Doc’s success on the football field in 1945, he not only won the Heisman, but also the prestigious Sullivan Award as the nation’s finest athlete. Additionally the Walter Camp Trophy and the Maxwell Cup awards came to him too. Blanchard is also the only football player to ever win both the Heisman Trophy and the Sullivan Award.

One can hardly mention Doc Blanchard’s name without immediately thinking about his equally distinguished backfield mate, Glenn Davis. These two touchdown twins were both consensus All-Americans for the three years they played together at West Point. Glenn resembled an astonishing blast of lightning at halfback. On the other hand, Doc was more like a Mack truck with jet engines as the team’s fullback.

In complementing each other, Davis was known to the sports world as “Mr. Outside” and Doc was known as “Mr. Inside.” By the time their West Point careers came to an end, they had amassed a total of 97 touchdowns, a record that stood for 60 years. Together they were featured on the covers of both Time and Life magazines. Their exploits on the field were the key to Army’s breathtaking record of 27-0-1 from 1944 to 1946. During the 1944 season, Army averaged 56 points per game while restricting their opponents to 3.9 points per contest.

After the 1946 season, Glenn Davis received the Heisman Trophy as the nation’s outstanding football player, as well as the Male Athlete of the Year by the Associated Press. An opposing coach was reported to have a solution to stopping both Blanchard and Davis — "Graduation!”

So on that crisp December day in 1945 in Bishopville, the telephone rang loudly at Tom’s aunt’s home, and both Tom and West were about to pop wide open with excitement and hope. Breath could hardly be caught as the two 11-year-old boys waited to hear the news on the other end of the telephone. “Wonderful,” Tom’s Aunt Nell responded. “They have been waiting here with tremendous excitement. I will send them over now.” Immediately Tom and West bolted out of the house and ran next door. A childhood dream was about to come true for these two awestruck 11-year-old boys.

Therefore after the two very excited Summers cousins rang the Blanchard doorbell next door, Mrs. Blanchard and her daughter, Mary Elizabeth, who was home from Winthrop College for the festivities, answered the door. Dr. Blanchard had passed away the previous year at age 46. Soon Doc came to the door to greet the boys, and then welcomed them inside. It was as if the earth had moved and trembled. They were now there in front of one of the greatest sports figures in the world.

Once inside the den, Doc told both Tom and West how much he had heard about them from Tom’s aunt and uncle next door. He stated how delighted he was to finally meet them. In conversation Doc made these boys feel right at home. He seemed to know exactly what these two 11-year-olds wanted to talk about. Doc asked them about their youth football team back in Orangeburg, as well as described some of his games at Army that season.

Doc praised his wonderful teammates and showed the boys a scrapbook containing newspaper clippings and photos of his football career. His primary focus, however, was on the gifts and contributions of his teammates.

After a few minutes Doc went over and picked up a football and casually tossed it around to the two gleaming boys in the den. Then came the coup de grace — Doc invited Tom and West to come outside and play catch. Someone in the family suggested that Doc put on his “Block A” Army sweater too.

Donning the West Point sweater, Doc kindly held open the door for these two awestruck kids to go to the front yard. Once outside he had both Tom and West running out on pass patterns whereupon he threw the football to them many times.

More discussion about football interspersed these passing patterns. Both boys were soaking up every word of inspiration that this Superman of athletes provided. Before the boys had to leave, someone came out with a camera and snapped an iconic photograph of these two overwhelmed boys of their once in a lifetime experience with a real life hero.

Several weeks later when Doc was back at West Point, Tom Summers wrote to Doc there, thanking him for letting them visit him on his very busy day of celebration in his hometown of Bishopville. Here is Doc’s reply that was on West Point stationery.

"I sure remembered you, Tom. I’ve heard Nell talk about you so much, and my mother told me about seeing you at the beach. Did the picture come out OK? I sure hope so because as a rule I don’t take very good pictures. You must have had a good team this year to have won so many games. I’m sorry that the school house burned down, and that you won’t be able to play basketball this year in the gym.

"As I remember, I always had a good time playing basketball in the winter when it was too cold to go outside. Hope I’ll see you when I come home this summer."

This experience of a lifetime for two 11-year-old boys was a memory to be cherished forever. What a remembrance!

You can support local news

Incidentally, the way Doc Blanchard received notification of his winning the Heisman Trophy was far different from the glitz of today’s television presentations. Doc stated that he simply received a telegram that said, “You have been selected to win the Heisman Trophy. Please wire collect!”

WATER IS LIFE: All about Santee Cooper's water systems

In this Jan. 5, 1946, file photo, Army football team member Felix "Doc" Blanchard Jr., right, gets an advance look at the Heisman Memorial Trophy to be presented to him a few hours later at the Downtown Athletic Club of New York.

The 2020 Heisman Trophy ceremony is scheduled for Tuesday, Jan. 5, 2021, at 7 p.m. on ESPN. Finalists for this year's award are Clemson QB Trevor Lawrence, Florida QB Kyle Trask, Alabama QB Mac Jones and WR DeVonta Smith of Alabama. Because of the COVID-19 pandemic, the ceremony will happen virtually. ESPN will broadcast the event out of its campus in Bristol, Connecticut.

In 1946, second-ranked Notre Dame fights to a 0-0 tie with No. 1 Army at Yankee Stadium to snap the Cadets’ 25-game winning streak. The Irish defense holds Army’s running backs Doc Blanchard and Glenn Davis to a combined 79 yards. In this photo, Blanchard, left background, fumbles the ball, in air, center, in the first period of the famous game.