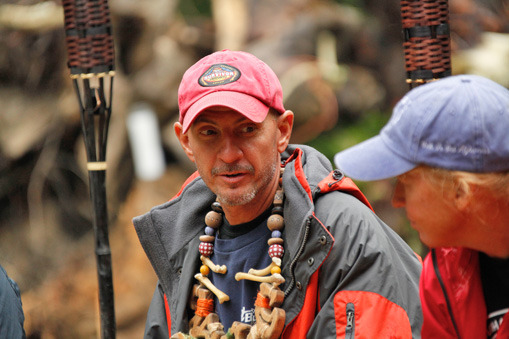 O’Cain is pictured wearing his individual immunity necklace after winning a question and answer challenge about his merged tribe. 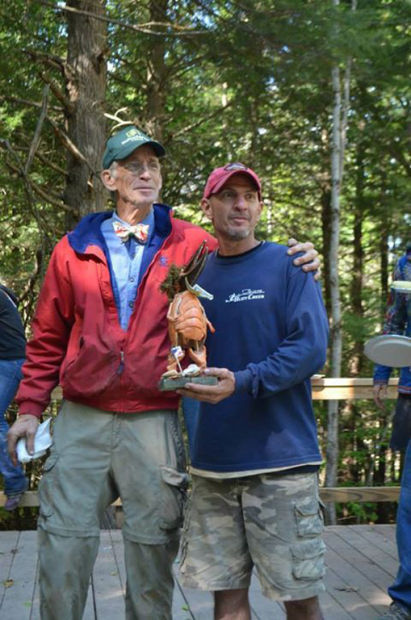 Russell O’Cain of Cordova is pictured with Bob Crowley, winner of “Survivor: Gabon,” after he was named the winner of the Durham Warriors Survival Challenge. O’Cain holds the immunity idol, a lobster shell called “Bobster” Crusty the Lobster. 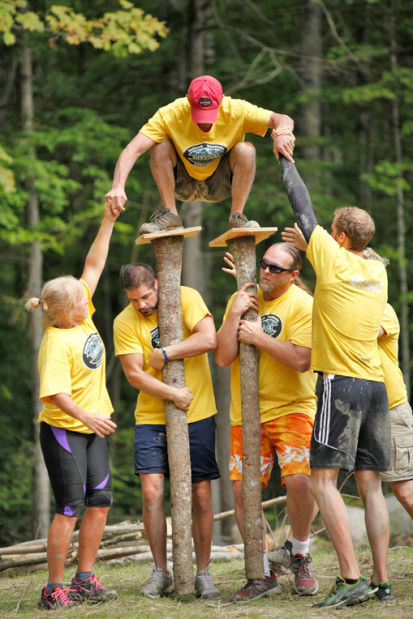 During the up-on-a-pole challenge O’Cain balances on log stilts as his teammates attempt to traverse from one end to another.  View more photos from photographer Lisa Littel online at lisalittel.com/Events.

A year and a half ago while attempting to perform a back-flip off a stage in “Survivor”-style competition at Buoy Creek in Orangeburg County, Russell O’Cain of Cordova came up short, slamming his head into the stage and, in the process, breaking his neck. He was suddenly confronted with the possibility that he’d never compete again.

O’Cain, however, has proven he’s no ordinary man. Once he recovered, a feat that caused his doctors to shake their heads in amazement, he entered the first-ever Durham (Maine) Warriors Survival Challenge to benefit military veterans, outwitting and outplaying his 17 fellow contestants to claim victory.

The day he was injured at Buoy Creek, O’Cain was flown by helicopter to Trident Regional Medical Center in Charleston, where he was placed in the ICU. An angiogram, an X-ray test that uses a special dye and camera to take pictures of the blood flow in an artery, was done on an artery leading to his brain. The blood in the artery had begun clotting, putting O’Cain at risk for stroke and forcing the medical staff to concentrate on that issue before attending to the three broken bones in his neck.

“They had to put me on a blood thinner to keep me from having a stroke,” he said.

The experience was a scary one for O’Cain, who has unsuccessfully applied 17 times to compete on the real “Survivor” on television. He said he’s been competitive all of his life.

“I got two older brothers. I had to keep up with them,” O’Cain says, smiling.

The possibility that he’d never compete again because of his injuries wasn’t the most frightening thought he had that day, though. He was thinking about two very special young men, ages 6 and 12.

“The main thing I thought about was my grandboys, you know,” O’Cain said, the words catching in his throat.

“Getting out and throwing the football, throwing the baseball with them. That was what went through my head — not being able to do things with them.”

He stayed on blood thinner for about two weeks, he said.

“Then the pain in my neck got so bad I had to have some relief ... and they had to go in and do surgery,” O’Cain said. “They had to put a plastic ‘wafer’ and some screws in my neck. They actually had to go through the front of my throat to do the surgery ... had to move my esophagus and all that.”

O’Cain was later told by his doctors and nurses “how lucky I was that I was even walking.”

Although he realized he “needed to settle down a little bit,” O’Cain was anxious for his life to get back to normal. His physicians told him to “just have patience.” When he was finally released from care, they told him he could do whatever he wanted to do, assuring him his neck “was stronger now than it was before” the accident because of the addition of the permanent plastic wafer.

Two years ago when O’Cain and his wife, Sherry, attended the Give Kids the World charity event in Orlando, Fla., he took along some of the newspaper clippings about him having competed in the “Survivor” competition at Buoy Creek. He showed the articles to Bob Crowley, winner of TV’s “Survivor: Gabon” in 2008. Crowley told O’Cain he and some friends were thinking about doing a “Survivor” competition on his 100-acre property in Maine.

At this year’s charity event in Orlando, Crowley asked O’Cain if he wanted to enter his Durham Warriors Survival Challenge Sept. 5-9.

Since the accident back on April 7, 2012, he had wondered if he could still handle survival competition.

“It was a good test for me to do to see if I could still compete,” he said. “I didn’t want to give up competing.”

The challenges in the Maine event were similar to those at Buoy Creek, O’Cain said. At age 51, he was closer to the oldest end of the age range, with the youngest contestant being 21 and the oldest, 64.

The first night there, the contestants were advised they “weren’t going to have any shelter, food, flint for fire,” he said. “They told us, ‘We’re going to treat you like you were on the real “Survivor.”’”

“They put us in separate rooms because they didn’t want us to see each other and start making early alliances. That night they took us to tribal council. Bob Crowley said they were going to take us out in the middle of nowhere by ourselves. We had one blanket, a raincoat, long pants and long shirt and mosquito spray — that was all you could take,” O’Cain said. “They took us out in the woods and said, ‘There’s your spot; get comfortable.’”

The temperature that night dropped to 38, he said.

“I laid on a piece of plastic and put all the clothes I had in my bag on and wrapped up with the blanket. I would shake, doze off and wake back up and shake some more. I didn’t sleep much that night,” O’Cain said.

As the competition progressed, the contestants were divided into three teams of six members each and the teams were given the Native American tribal names of Micmac (O’Cain’s team), Penobscot and Maliseet.

Some of the challenges were grueling, like the one where the teams had to run up and down hills and over rough terrain to find two “stores” equipped with supplies they needed, such as flint to start fires, a pot to cook their rice in, apples, energy bars, etc.

As the teams raced off to find the stores, O’Cain said he and a teammate, Daniel Beale, 26, ran hard, neck and neck.

O’Cain and Beale were the last two standing in the final challenge, a balancing event. O’Cain held on just long enough to win it all.

What he actually won was an immunity idol made from a lobster claw decorated by a Maine artist.

“I felt pretty good about the competition going into it. I did train for it ... did a lot of running, pull-ups ... practiced with a slingshot and balancing,” O’Cain said.

One of the keys to his victory was forming the alliance with Beale, “a strong, smart competitor and somebody I could really trust ... You have to know people, be able to read them,” he said.

The competition “teaches you about yourself,” O’Cain said.

He says he’s already looking forward to next year’s competition in Maine. He’s also planning to apply — for the 18th time — to compete on TV’s “Survivor.”

O’Cain gives credit where credit is due when it comes to his recovery and his recent triumph.

“It could have easily gone the other way.”

Bishop Brown to be commemorated May 18

Bishop Ronald E. Brown, who passed away in May of 2019, was the presiding prelate, pastor and founder of the Faith Tabernacle Deliverance Temp…

“My job was to transport and make sure they get what’s needed on the front lines,” said 57-year-old Lt. Col. Andrew Dallas Green, U.S. Army, retired.

'I was petrified': Newlyweds tell their story of being rescued on a N.C. mountain

CHARLOTTE – Two AAA service providers are receiving top honors for rescuing a Florida couple, who were trapped in their RV, after it nearly sl…

The best school district in every state

A look at the best school district in each state.

The nomination: Carrie Rivers believes that God brought an ICU team together in April 2020 that included Evelyn Pauling. She was told that Mrs…

STORIES OF HONOR: From aircraft mechanic in Vietnam to top-flight flight instructor

As an aircraft mechanic, U.S. Air Force veteran Carroll Joye didn’t see combat in Vietnam, but he did have some harrowing experiences.

The nomination: Malarie Shuler nominated her friend Jamie Jones because she is selfless, passionate, caring, a great patient advocate and repr…

NURSES 2021: Amanda Peeples helps during some of the hardest times

The nomination: Christie Canaday felt it was an honor to nominate her coworker and friend, Amanda Peeples, for the dedication, compassion and …

O’Cain is pictured wearing his individual immunity necklace after winning a question and answer challenge about his merged tribe.

Russell O’Cain of Cordova is pictured with Bob Crowley, winner of “Survivor: Gabon,” after he was named the winner of the Durham Warriors Survival Challenge. O’Cain holds the immunity idol, a lobster shell called “Bobster” Crusty the Lobster.

During the up-on-a-pole challenge O’Cain balances on log stilts as his teammates attempt to traverse from one end to another.  View more photos from photographer Lisa Littel online at lisalittel.com/Events.