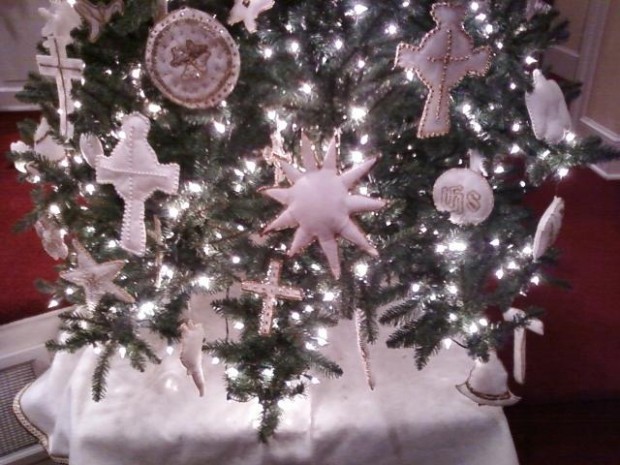 Chrismons are gold and white, representing majesty and purity. Ideas for fashioning them are developed from early Christian symbols, the Bible and church histories. 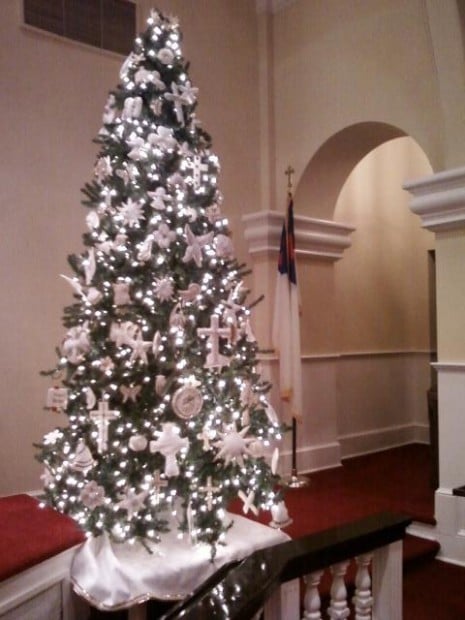 Pictured is the Chrismon tree at St. Paul's United Methodist Church in Orangeburg. 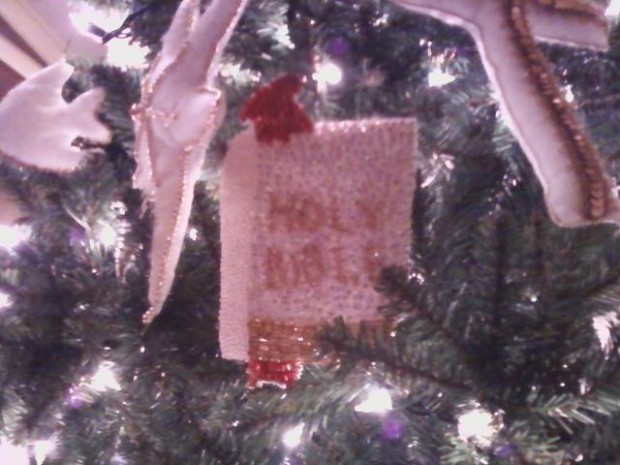 This Chrismon is a replica of a Bible, the word of God.

Chrismons are gold and white, representing majesty and purity. Ideas for fashioning them are developed from early Christian symbols, the Bible and church histories.

Pictured is the Chrismon tree at St. Paul's United Methodist Church in Orangeburg.

This Chrismon is a replica of a Bible, the word of God.

Over the years, the Christmas tree has become a symbol of Christ as the "tree of life." Through the birth of Jesus, believers have been given God's gifts of life, light and wisdom.

The use of Chrismons to decorate Christmas trees is popular in many churches today. Chrismons were first developed in 1957 by Frances Kipps Spencer of Ascension Lutheran Church in Danville, Va. In an effort to create appropriate decorations for her church Christmas tree, Spencer fashioned centuries-old symbols into white and gold tree decorations.

"Chrismon" is a combination of the words "Christ" and "monogram," and means "symbols of Christ." Chrismons are gold and white, representing majesty and purity. Ideas for fashioning them are developed from early Christian symbols, the Bible and church histories.

Although Chrismons have been used in the United States since 1957, many symbols of Christianity have come down to us through the ages. Early Christians often worshipped in secret to avoid possible persecution and death. They developed certain symbols that were used to communicate with fellow believers and direct Christians to secret places of worship. Symbols that signified the believers' faith often adorned doors and buildings, and were included on items such as jewelry and household utensils.

Spencer's Chrismons and similar designs are now used on Chrismon trees in churches of different denominations throughout the country. The lighting of the Chrismon tree often is incorporated with the hanging of the greens in some churches.

A collection of popular Chrismons are included below. Pattern books and instructions are available at some Christian books stores or you can design your own.

- Alpha and Omega: The first and the last letters of the Greek alphabet are used in this Chrismon to signify that Christ is the beginning and ending of all things. This is mentioned in the Bible in Revelation 1:8.

- Anchor cross: The anchor cross originated in ancient Egypt and was adapted by the early Christians in the catacombs.

- Bell: A bell is often used to call people to worship. This Chrismon symbolizes the sounding forth of God's word and serves as a reminder that God should have first priority in our lives.

- Bible: This Chrismon is a replica of an open Bible, which represents the word of God.

- Budded cross: The Budded Cross is symbolic of the young Christian who has just begun serving Christ. Like a bud, young believers are considered "immature Christians."

- Burning torch: This symbol reminds Christians to be witnesses for Christ.

- Butterfly: The butterfly is a symbol of Christ's resurrection and eternal life. Just as the butterfly emerges from its cocoon and flies upward with a new body, the followers of Jesus Christ are reborn and given a new life.

- Cup: The cup is a symbol of the blood Jesus shed on the cross for our sins. The cup also reminds us of the sacrament of Holy Communion.

- Chi Rho: The Chi Rho Chrismon is a monogram of the first two letters of the Greek word from Christ - Chi (X) and Rho (P).

- Christmas rose: The Christmas rose is a white, hardy rose that blooms at Christmastime. It is symbolic of the messianic prophecy and the nativity.

- Circle and triangle: This Chrismon combines a circle and a triangle to form an unique symbol of the eternity of the Trinity.

- Cross and crown: The cross and crown symbolizes a Christian's reward in heaven for being a faithful servant while living on earth. See Revelation 2:10.

- Cross pattee: This form of the cross resembles a Maltese cross and is often used for decorative purposes.

- Daisy: Toward the end of the 15th century, the daisy became a popular symbol for the innocence of the Holy Child.

- Dove: The dove is a widely recognized symbol of purity and innocence. The dove also stands for the Holy Spirit, and is a reminder of the presence of God during the baptism of Jesus and hovering over the waters at creation.

- Epiphany star: This star represents the star of Jacob and the star that led the wise men to Jerusalem. See Numbers 24:17.

- Fish: The fish is a popular symbol of Christianity today. It was a secret symbol used by the early persecuted Christians to signify their belief in Jesus.

- Harp: The stringed harp is symbolic of music that praises God.

- Lamb: In the New Testament, Jesus is often referred to as "the sacrificial lamb."

- Manger: The manger reminds us to be humble, and represents the simplicity of the birth and life of Jesus.

- Shamrock: The three leaves of the shamrock, or clover, stands for the Trinity - Father, Son and Holy Ghost.

- Shell with drops of water: This Chrismon is symbolic of Jesus' baptism in the Jordan river by John the Baptist.

- Trumpet: The trumpet signifies a call to worship, the day of resurrection and the day of judgment.