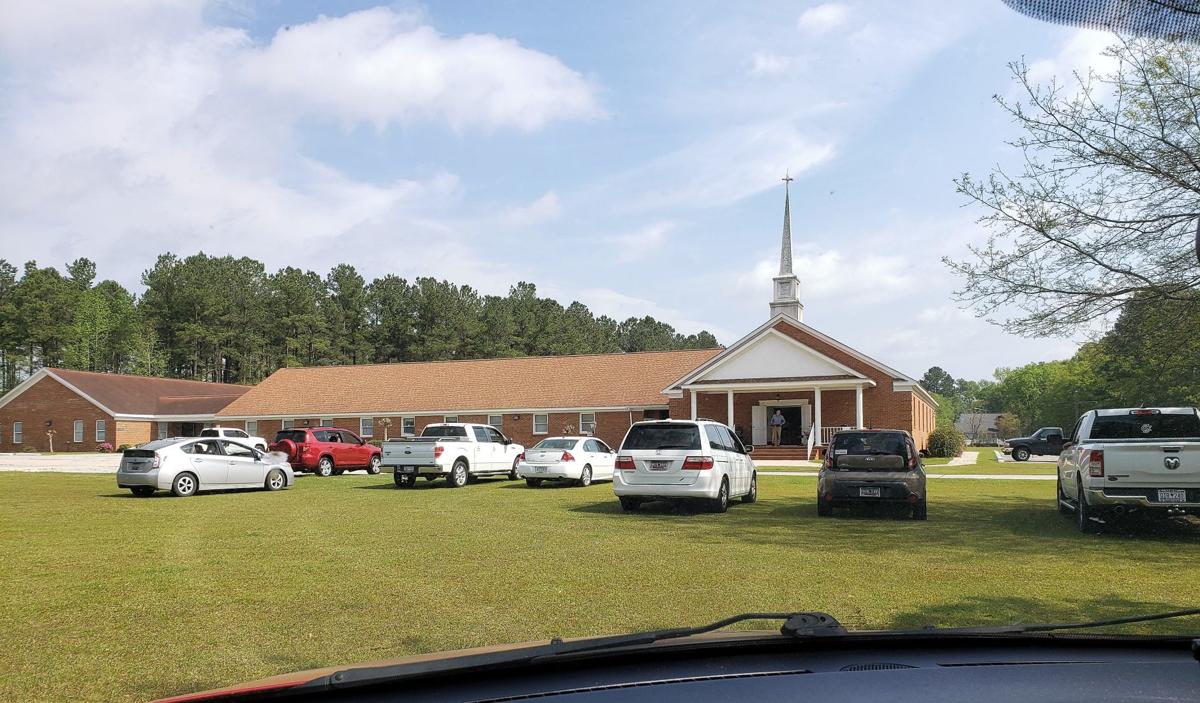 With their car radios tuned in to the same station, the congregation of New Hope Baptist Church is continuing traditional services in a non-traditional way. 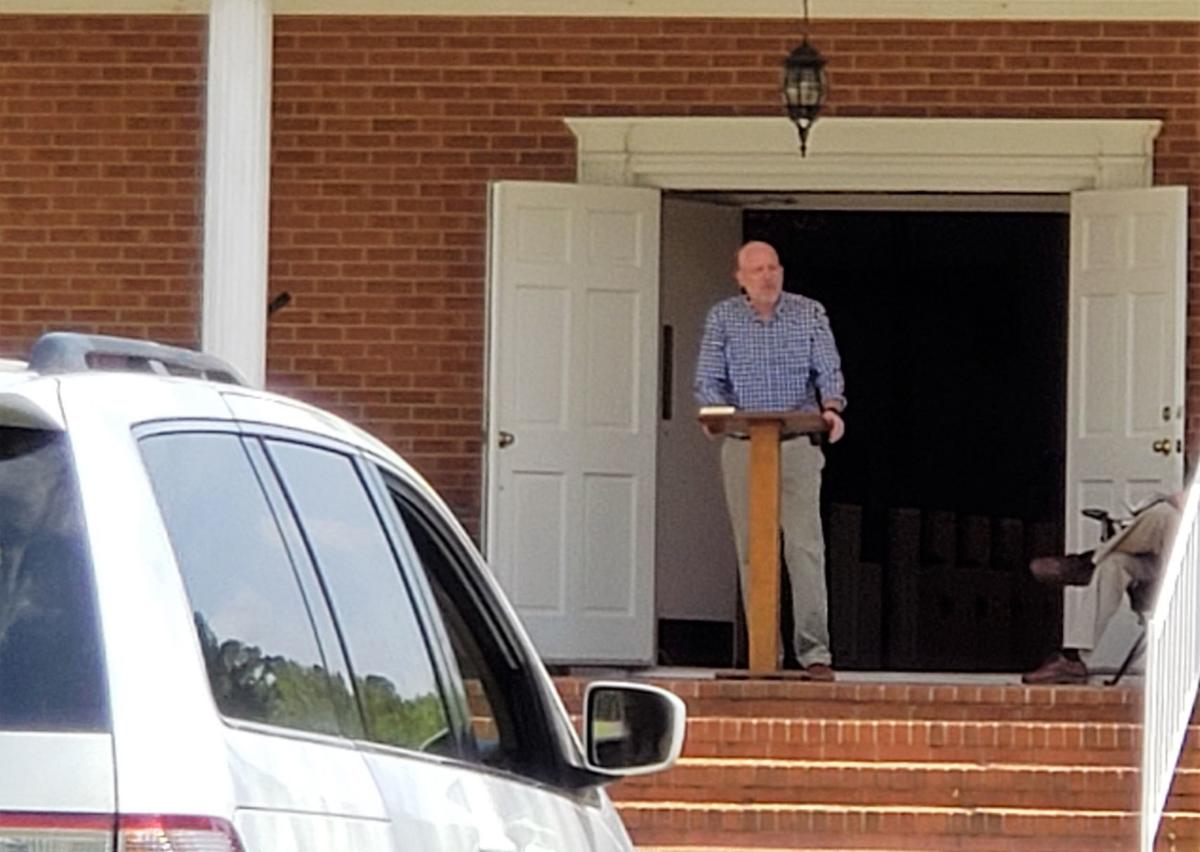 Pastor Billy Hurst is able to speak to his parishioners through a radio transmitter, allowing them to continue their Sunday services.

The world seems to be at a virtual standstill for an uncertain amount of time, but there are still pockets of communities finding creative ways to remain safely and socially distant while continuing the things that bring them hope to get through this “new normal” way of life.

The members of New Hope Baptist Church ended their regular Sunday services two weeks ago and were, for the time, not meeting as they usually would.

Pastor Billy Hurst said it was important for the congregation to find a way to help people adjust and find a new sense of normalcy during this time.

“From the day, two and a half weeks ago when I mentioned we were going to have to cancel services, people understood, but they were heartbroken and said they were really going to miss it,” Hurst said.

Then a blessing that was right under their noses inspired them with a solution that allowed them to keep preaching to the people while simultaneously following health and safety precautions.

PRAY AND WASH: Religion joins with science amid virus spread

The church rediscovered a radio transmitter that they owned which had previously been used during the Christmas season. This gave New Hope Baptist a way to continue having their services by transmitting them through FM radio.

“They used to do a Christmas drive-in,” Hurst said. “They used the transmitter to broadcast to people coming up in their cars and drive through to see the different scenes.”

Hurst said the repurposed transmitter goes out just far enough to reach the service attendees from the safety of their cars, right in the parking lot.

“That allows me to stand on the front porch of the church, speak and preach as normal and have our music guys do the same,” he said.

“This is just a great way to keep them engaged in the Word and engaged to fellowship with each other,” Hurst continued. “The best way we came up with was using this transmitter and put it to use because people don’t mind coming out for 45 minutes in their cars.”

Michele Flaherty, a member of New Hope, said the old transmitter had been sitting around, never being used anymore, and now there was a reason for it.

She said that online and television services just didn’t feel the same without seeing the people you’re used to seeing every week and communicate with regularly. Being able to check in with others was a great change of pace.

“Just being there and seeing people in their cars, even if you were just looking at the back of their heads, then you know they’re doing well,” Flaherty said. “I felt like there was a burden lifted from me, just this sense of relief of being a little more normal.”

Flaherty said there were huge smiles all around, and people were talking and waving from within the comfort of their cars.

Worries over virus prompt changes in many worship services

After two already cancelled services, when they finally met up, Flaherty said some of the church’s older members looked like animated teenagers with huge grins getting to see their friends again.

“I didn’t even realize how powerful that was going to be,” she said. “It didn’t matter how far away your cars were, you could communicate.”

Hurst said, “My concern for our congregation, being a smaller and older congregation, is a lot of folks don’t have computers, and if they do, they don’t really do Facebook, so how can we keep ministering to them and teach them God’s word and encourage them?”

They had a count of about 29 people come out to their very first drive-in style service. The church’s usual attendance averages about 40 to 45, so getting just over half of their congregation was a good sign.

“It made people’s day to be able to come together and see each other face-to-face even though we didn’t shake hands or hug,” Hurst said. “Just having the fellowship of a brother or sister in Christ, to see and be around, is very encouraging to them as opposed to just being at home and watching a service on TV.”

He is confident that as the word gets out to the rest of the New Hope regulars, attendance will go up and they will at least have a temporary fix to the situation everyone is stuck in.

Hurst said the reviews coming in seem to find the church community is very accepting of this work around.

“’I miss worshiping like this’ is what many people said,” Hurst said. “We’re excited to see what the Lord’s going to do.”

Flaherty said, “I think the best thing about it is the sense of community.”

“I’m just really glad that we’re doing it and I know that I felt such a huge sense of relief and normalcy,” she said. “It just made me feel so much better to be there.”

Going forward, New Hope Baptist said they plan to continue the drive-in services every Sunday at 11am, until such a time that the government deems it appropriate for everyone to come back together or that it would be safe to worship inside again.

Regardless of denomination, Hurst said if anyone is interested, they are welcome to drive up and listen in.

“We don’t want to take anybody from their church and their church services however they choose to meet, but if somebody’s looking for a place to worship, they’re scared or concerned, come be a part and hear encouraging words we give on a weekly basis from God’s word,” Hurst said.

“There’s plenty of room in the parking lot,” he added chuckling.

April 5, 2020: What South Carolinians need to know about the coronavirus

April 6, 2020: What South Carolinians need to know about the coronavirus

Years from now, some clergy will tell those who have yet to be born about the Lenten season of 2020, which felt more like a wilderness journey…

Claflin to honor 117 athletes on April 6

With their car radios tuned in to the same station, the congregation of New Hope Baptist Church is continuing traditional services in a non-traditional way.

Pastor Billy Hurst is able to speak to his parishioners through a radio transmitter, allowing them to continue their Sunday services.