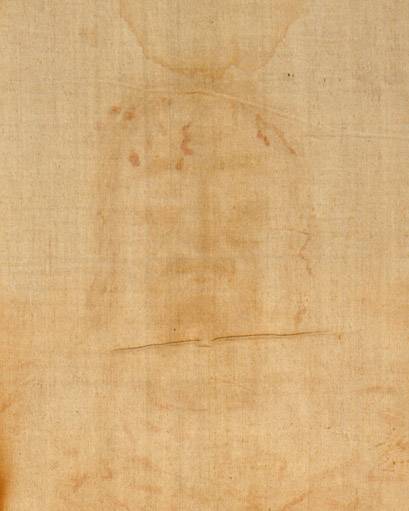 This is the facial part of the image on the shroud. The image is a little darker than the linen cloth and is difficult to see when the viewer is near the shroud. ((c) 1978 Barrie M. Schwortz collection, Stera, Inc.) 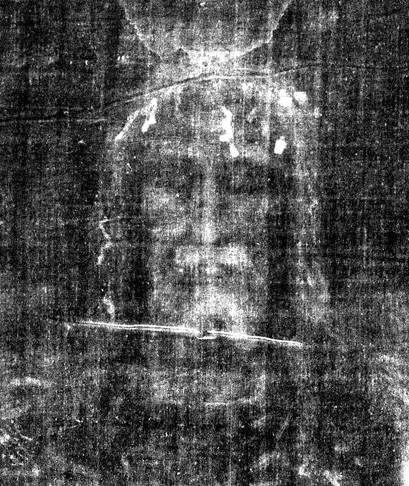 This clear view of the face on the shroud results when a photographic negative reverses black and white and makes the image positive. In 1898, the Italian photographer, Secondo Pia, photographed the shroud and was the first person ever to see this clear picture. Note the blood rivulets running down the forehead. ((c) 1978 Barrie M. Schwortz collection, Stera, Inc.)
By DALE LINDER-ALTMAN, T&D Staff Writer

Stored in the Cathedral of St. John the Baptist in Turin, Italy, lies what is perhaps the greatest mystery of all time — the Shroud of Turin.

For hundreds of years, the controversy has raged. Is the shroud the burial cloth of Jesus, or is it the most fantastic forgery in history? It is a question that has brought the community of faith and the community of science face-to-face in a search for answers.

The 13-by-4.5-foot cloth bears what appears to be the front and back image of a man brutally tortured and crucified. Slightly darker than the sepia-colored cloth it covers, the image is so dim that it can hardly be seen by a viewer standing close to it. But as the viewer moves further and further away, the image becomes more distinct.

Rust-colored stains blot the wrist, side and feet of the image. More than a hundred dumbbell-shaped stains, consistent with marks caused by a Roman flagrum, cover the chest and run down the back side of the image from the shoulders to the calves. Stains on the head area are consistent with punctures made by a crown of thorns, and a bruise mars the right cheek. Several rivulets of what appears to be blood can be seen flowing down the face.

It's not surprising that people in the Middle Ages were unable to discover the truth about the shroud. But what about people who have modern science at their fingertips?

Indeed, science has added a great deal to man's knowledge of the cloth. However, all of that information has only increased the mystery.

The most in-depth scientific study of the shroud took place in October 1978.

The Shroud of Turin Research Project Inc., an international team of scientists, spent 120 continuous hours examining and collecting data from the shroud that scientists are still studying today. STURP's purpose was to determine the scientific properties of the image on the shroud, and what might have caused it.

While these experts in various fields — including anatomy, biochemistry, medicine, forensic pathology, chemistry, physics, pathology and photography — and those who continue to study their data have multiplied the knowledge about the shroud, they have been unable to determine what caused the image.

"I had first-hand access to all the scientific data," said Barrie Schwortz, the documenting photographer for STURP, founder and editor of the official Shroud of Turin Web site and executive director of the Shroud of Turin Education and Research Association.

"We started out working in 1978, but with all that science, all we can tell you is what it is not," Schwortz said in a telephone interview with The Times and Democrat.

In 1981, after three years of study and evaluation of the data and samples, STURP released its findings in a final report that offered a great deal of information, but little in the way of answers.

The team determined that the image was not created by paint, dyes or stains; nor was it the result of a burn. Computer enhancement and the V-8 analyzer — the instrument used by NASA to draw relief maps of the moon by using dark and light shadows — revealed that the shroud has three-dimensional information encoded in it, which is not true of portraits or paintings.

STURP concluded that the image is that of a "real human form of a scourged, crucified man. It is not the product of an artist. The blood stains are composed of hemoglobin and also give a positive test for serum albumin."

The report went on to say that the image was formed by something that changed the actual structure of the microfibrils of the linen itself.

"There are no chemical or physical methods known which can account for the totality of the image, nor can any combination of physical, chemical, biological or medical circumstances explain the image adequately."

The team's final conclusion was that "the image is an ongoing mystery and until further chemical studies are made, perhaps by this group of scientists, or perhaps by some scientists in the future, the problem remains unsolved."

While the STURP conclusions seemed to lend some support to the shroud's authenticity, radiocarbon dating in 1988 told a different story.

The testing was done on a strip of the shroud taken from a single site. Researchers from three separate laboratories dated the shroud between 1260 to 1390 A.D. Those results have since been questioned — not on the quality of dating, but on the original sample that was taken for testing.

Recent studies suggest that the sample used was expertly rewoven in the Middle Ages. The studies, one by Sue Benford and Joseph G. Marino and another by STURP member Raymond Rogers, were published in peer-reviewed magazines.

A number of studies done on the shroud since 1978 have revealed other information. Dr. Max Frei, a Swiss criminologist who took sticky tape samples from the shroud, claims he identified some 58 species of plants indigenous to the region surrounding Jerusalem, including Gundelia tournefortii, or a thorn plant.

Dr. Uri Baruch, a palynologist with the Israel Antiquities Authority and an expert on Israel's flora, examined the pollen samples and confirmed Frei's findings.

While much of the data about the shroud seems to support its authenticity, there remains the question of where it was before it showed up in Lirey, France, around 1350. Those who question its authenticity claim there is no proof of its existence before the French knight Geoffrey de Charny put it on display in Lirey.

However, Schwortz said there is some documentation that shows the cloth was taken to Edessa, in northern Mesopotamia, following the Crucifixion and later moved to Constantinople, the capital of the Roman Empire, before being taken to France by Charny.

Schwortz, an Orthodox Jew, said he went into the STURP examination convinced that the team would quickly prove that the shroud was a painting. Instead, he became convinced that it was authentic and once covered the crucified body of Jesus.

However, Schwortz said he is still a Jew and is convinced that the shroud is authentic because of the unbiased evidence.

The Web site he maintains contains a comprehensive compilation of scientific documentation, and Schwortz calls himself the "switchboard keeper" of information about the shroud.

"Often, researchers call me in and say, 'I'm looking for this or that,' and I say, 'I have someone over here.' It's a central clearing house, and I make the connections," Schwortz said.

While STURP dealt with the scientific aspects of the shroud, Schwortz said there remains a spiritual side.

"I had ignored my faith for the better part of my life," he said. "It forced me to look into my own heart as an adult, and I found God had been there all along."

The value of being a member of STURP was not just about taking photographs, Schwortz said. His work in storing and organizing the information about the shroud and making it available to people is his calling, he said.

"It deeply impacted my life in a positive way," he said. "It restored the faith that I was born with, and I follow the path that God has put me on, and that's where I'm going to go."

According to Schwortz, looking at the shroud makes you think about God, and that has a positive effect on a person, whether they're a Christian or not.

"In the end, each one of us has to confront the image on the cloth and decide what it means to us in our own hearts," he said. "That's the only place the answer may be found."

For more information about the shroud, visit shroud.com.

Pope all but endorses authenticity of Turin shroud

TURIN, Italy - Pope Benedict XVI all but gave an outright endorsement of the authenticity of the Shroud of Turin, calling the cloth that some …

The deadliest jobs in America

The deadliest jobs in America

Watch this rocket launch from the wing of a jumbo jet

Watch this rocket launch from the wing of a jumbo jet

This is the facial part of the image on the shroud. The image is a little darker than the linen cloth and is difficult to see when the viewer is near the shroud. ((c) 1978 Barrie M. Schwortz collection, Stera, Inc.)

This clear view of the face on the shroud results when a photographic negative reverses black and white and makes the image positive. In 1898, the Italian photographer, Secondo Pia, photographed the shroud and was the first person ever to see this clear picture. Note the blood rivulets running down the forehead. ((c) 1978 Barrie M. Schwortz collection, Stera, Inc.)
© Copyright 2021 The Times and Democrat, 1010 Broughton Street Orangeburg, SC | Terms of Use | Privacy Policy
Powered by BLOX Content Management System from TownNews.com.
You don't have any notifications.