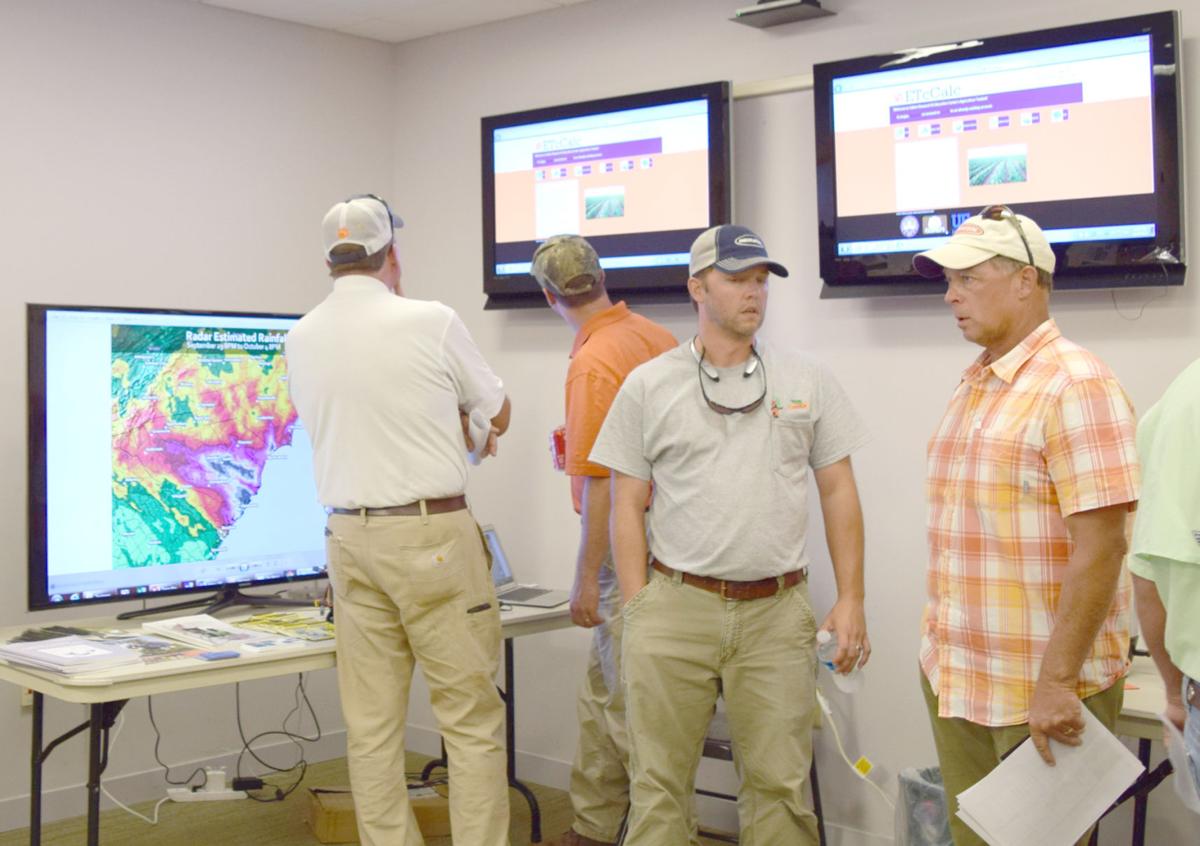 Even though field tours had to be canceled for this year’s Cotton/ Soybean Field Day, faculty and staff at the Edisto REC provided demonstrations and exhibits explaining ongoing research at the station. 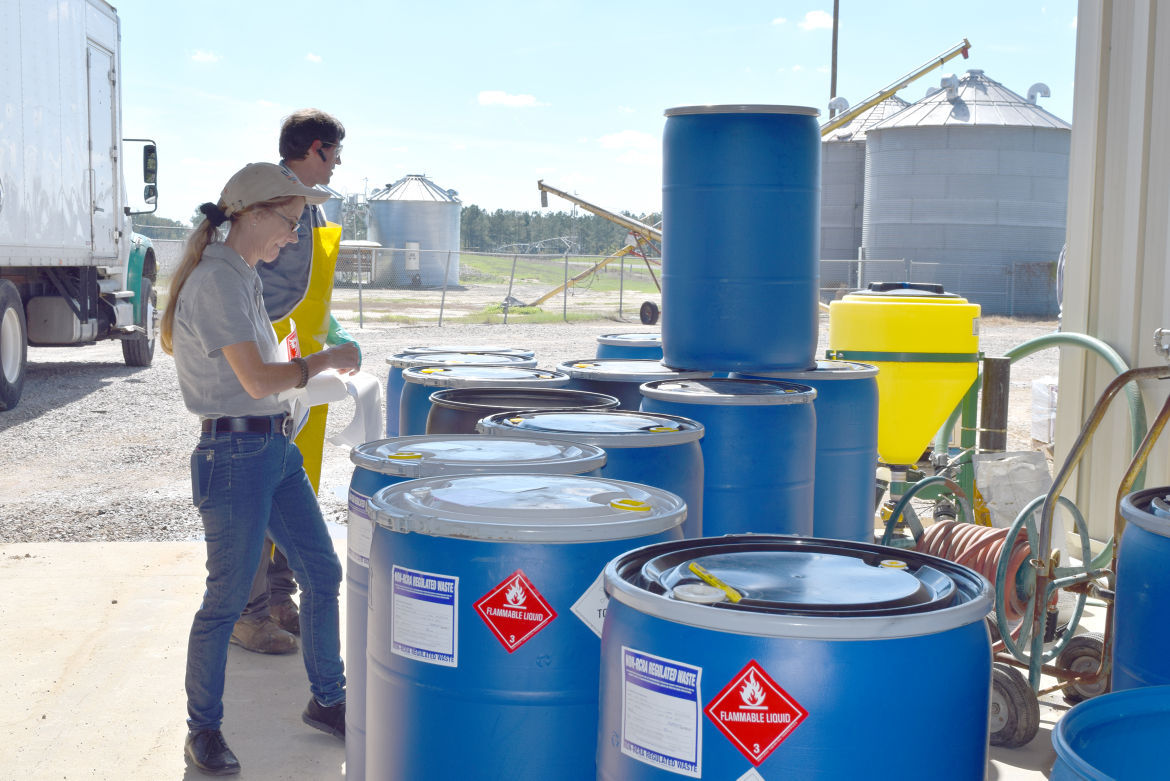 A part of the field day that did not change was the collection of old pesticides and containers. Three to four times the expected volume of chemicals were brought in and the program, coordinated through the SCDA, was considered a success.

Even though field tours had to be canceled for this year’s Cotton/ Soybean Field Day, faculty and staff at the Edisto REC provided demonstrations and exhibits explaining ongoing research at the station.

A part of the field day that did not change was the collection of old pesticides and containers. Three to four times the expected volume of chemicals were brought in and the program, coordinated through the SCDA, was considered a success.

The event was revamped to address the pressing needs of area farmers. With their fields of cotton, peanuts and soybeans standing in water, farmers came out to find answers to their most immediate question – how to salvage what remained after the drenching rains and floods.

South Carolina Department of Agriculture Commissioner Hugh Weathers showed aerial photos of fields and livestock farms across the state that were under water. The initial conservative estimates are that direct crop losses from the recent flood may exceed $300 million, Weathers said.

“(We have) a team out there to help and support farmers,” Weathers said.

“We’ve had two disasters,” Ott said. “I cannot remember a year like this – hot and dry, then a flood.”

Ott recommended farmers call their crop insurance agents and financial lenders right away as well as taking pictures to document damage. They should have an adjuster come out to their farm right away. He stated that most flooded fields would see zero production, no matter what was growing in them.

“I hope everybody bought up the most (insurance) you could buy, but I know you didn’t,” Ott said. “We believe that 70 percent of cotton, 70 percent of peanuts and 50 percent of soybeans are lost.”

Mike Lott with the Natural Resources Conservation Service gave an overview of two conservation programs that provide financial and technical assistance to farmers. More information on the Environmental Quality Incentives Program (EQIP) and the Conservation Stewardship Program (CSP) can be obtained by contacting a local service center or from the NRCS website http://www.nrcs.usda.gov/wps/portal/nrcs/site/sc/home/ .

Charles Davis, Calhoun/Richland County extension agent, discussed the double whammy that farmers have had to deal with this year with the extremes in weather and how it has effected cotton.

“We’ve got a nasty, ugly crop,” Davis said. “Defoliation and management of sprouted seed are what we have to deal with.”

Davis said farmers who have already defoliated their crop are going to see regrowth and if they can get in their fields, they are going to have to defoliate again. Using the defoliant correctly and carefully is of utmost importance, Davis said. Sprouting cotton seed is a problem for the gin, Davis said, and any green wet matter needs to have dried out before picking.

Dr. Jay Chapin, Clemson Extension peanut specialist emeritus, pointed out that half of the South Carolina peanut crop was still in the ground when the flooding came. Fields that flooded are expected to be a total loss. The 45 percent of peanuts that were above ground were either freshly dug and may still be all right or had been dug for a while and are now badly weathered.

“Of those still in the ground, some will end up over mature and others will be OK,” Chapin said.

Chapin said two major factors with peanut production were getting enough water to the crop in August and getting too much water in September. The weather this year has worked against these factors.

John Hane of Palmetto Peanut and Middling Cotton Co. said people have asked him whether they should pick their cotton. It’s an individual decision, Hane said, as to whether it is worth it. Any regrowth, any sprouted seeds are going to be kicked out of the gin, Hane said.

With peanuts, Hane said, concentrate on getting up the good peanuts first, not those that are in the bottoms or that have stood in water.

“We are going to be compressing a two to 2-1/2-month harvest window down into a very short time and we’ve got to work quickly but we have to go slow with the combine to get the most peanuts out as possible,” Hane said.

Now farmers need to check for debris in the fields, check on hay that may have stood in water and be aware of any cherry tree limbs that broke off and fell into pastures. Weed pressure could also rise as a result of the flooding bringing in seeds and plants. Give thought to winter grazing and the fact that more nitrogen will be needed due to it leaching out with flood waters.

Marion Barnes, Colleton County extension agent, advised those with Bermuda grass pastures to watch out over the long term for root damage that may have resulted when fields were under water and without oxygen. He also emphasized safety when using getting bogged-down equipment out of fields.

Eric Snyder with the South Carolina Farm Bureau encouraged people to watch out for signs of depression in farmers who had suffered severe or total losses due to the devastation this year.

The meeting began with attendees milling around through multiple demonstrations and exhibits covering topics that would otherwise have been covered in the field tour. Sensor-based nutrient management, crop inter-seeding, cover crops, weed management, insect management and sensor-based irrigation as well as other topics were covered.

As a group of county agents, farmers and industry reps gathered around a display showing the Benghal Dayflower or tropical spiderwort, Sherry Aultman with the Department of Plant Industry pointed out some of the plants identifying characteristics. The discussion turned to control and the effort underway to locate the invasive noxious weed.

Aultman opened up the main program by discussing the threat that the Benghal Dayflower poses to South Carolina farmers. The plant competes with field and forage crops for resources and is a menace to more than 20 crops including soybeans and cotton, according to the DPI.

“It is regulated on the state and federal level and we have taken the lead to try and eliminate it,” Aultman said. “Check your fields and we can send agents if you think you have it.”

Dr. Mike Marshall, weed specialist, reiterated the importance of checking fields and edges now for the Benghal Dayflower as it is easier to spot while it is in bloom. “We have management practices ready to recommend for cotton, soybeans and peanuts,” Marshall said.

A part of the field day that did not change was the collection of old pesticides and containers. According to center Director Dr. John Mueller, the collection was a success, with farmers bringing in three to four times the volume expected. The program was coordinated through the SCDA.

For further information or to contact any of the speakers from the Cotton/Soybean Field Day at Edisto REC, call the center at 803- 284-3343.

Which season are you?