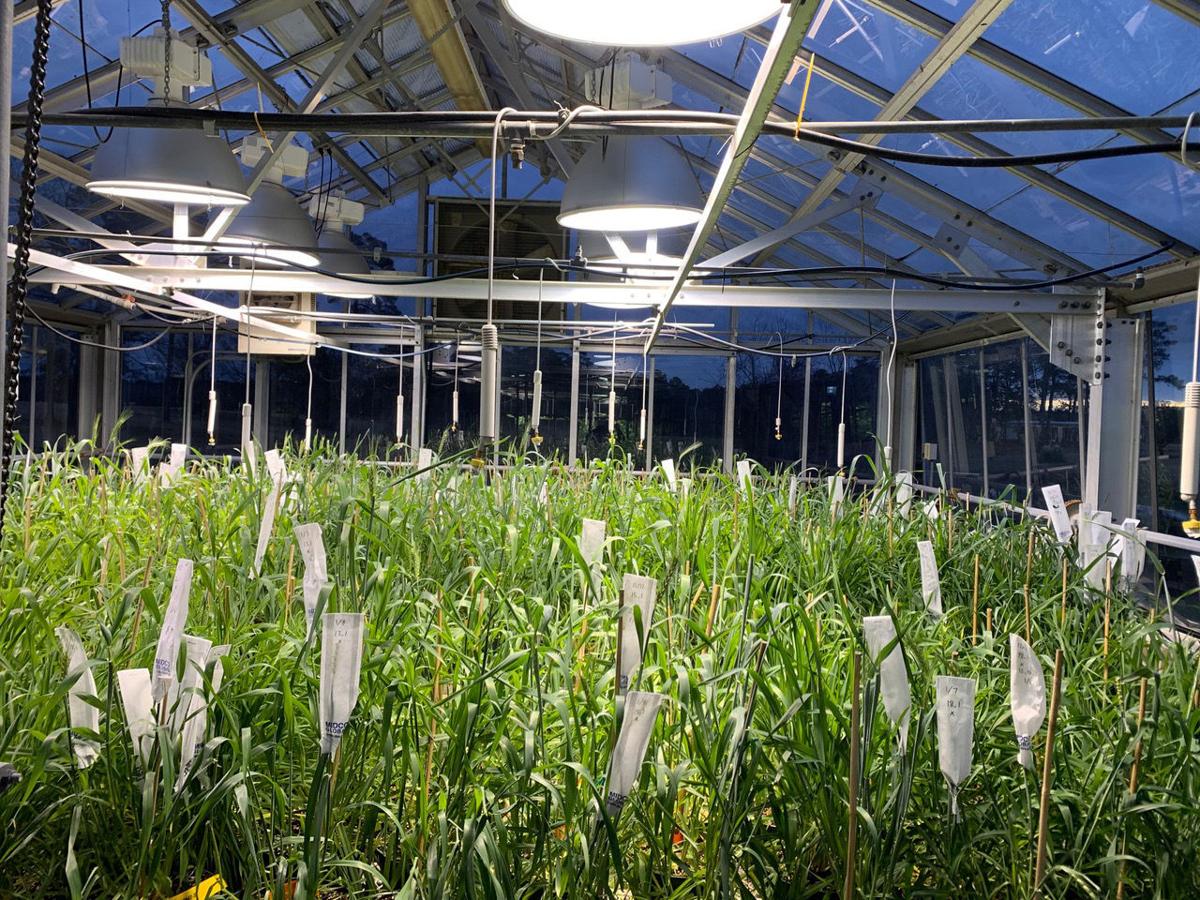 SunGrains is helping Clemson University add a robust plant-breeding program that is already conducting variety research in an array of crops important to the South Carolina agriculture industry, including peaches, soybeans, cotton, sorghum and others.

A partnership with a cohort of Southeastern land-grant research universities is helping Clemson clear a major hurdle toward reviving its small grains breeding program: gathering the material to get started.

Genetic material, that is, or germplasm.

SunGrains co-founder and N.C. State Professor Paul Murphy said the program’s approach to university plant breeding has been successful as a model for collaborative research endeavors and allowed the respective breeding programs at each institution to accomplish far more than would be individually possible.

“My experience is that it has immense benefits in efficiencies in basic and applied research, communication on issues big and small and, particularly in the era of big data research, this framework is a game changer,” Murphy said. “Each member of SunGrains has different professional strengths, so the entity is much larger than the sum of its parts. My goals have not changed as a small grains breeder, but I am working toward those goals in a much more efficient and timely manner because of SunGrains.”

Clemson had not had an active small grains program since 2008 — as it fell victim to a wave of cuts to such programs across the region during an economic downtown — when Rick Boyles was hired in 2017 to lead the Cereal Grain Breeding and Genetics program at Clemson’s Pee Dee Research and Education Center in Florence.

Crucially, from Clemson’s perspective, the SunGrains program allows for unfettered sharing of adapted germplasm, allowing Boyles and Clemson to, if not pick up where they left off, at least leapfrog many of the necessary steps typically involved in the process of starting a new breeding program.

In South Carolina, a vast majority of small grains acreage is dedicated to soft red winter wheat that is typically used in foods such as cookies or pastries or as livestock feed. Oats, barley, rye and triticale are other examples of small grains that are developed and released by SunGrains.

A primary goal of cultivar development is ensuring that crop varieties are appropriately adapted for targeted production environments. For Clemson, that means meeting the demands of South Carolina growers. One of the obstacles to reviving a dormant breeding program is developing the right foundation of germplasm — as any breeding lines that existed previously are outdated and, for all intents and purposes, useless.

“If you were to plant them out, they would not be competitive in terms of yield,” Boyles said. “They would likely be susceptible to the new diseases and insects that have emerged in the time since they were developed. So, there are plenty of challenges there. The biggest thing in a breeding program — one of your biggest assets — is your base of genetic material, and if you’re starting with a very limited amount you don’t really have a good foundation for success. This partnership with SunGrains allows Clemson to access germplasm, basically unrestricted, from all the other major Southeastern universities that have small grains programs.”

This allows, for example, breeders such as Boyles to adapt existing genetic lines that may perform well in the specific soil and climate conditions of South Carolina’s growing regions, even if those same lines have not thrived in the states where they were originally developed.

“Take the state of Louisiana, say a breeding line wasn’t great for their state and didn’t really perform well enough for release as a variety there, but it does really well in South Carolina,” Boyles said. “Under the agreement, I could take that line — certainly, LSU would be given a percent of royalty that’s reflective of their contribution — and Clemson could be the lead developer on that, and they can accrue royalties back from that line. So, it basically kick-starts the Clemson program and gives us a leg up, as opposed to just trying to do things either in a vacuum, just myself and my program alone, or trying to go to all of these different universities one by one.” SunGrains allows breeders to access and release varieties in crops they aren’t actively breeding. For example, Clemson might evaluate and release oat breeding lines from North Carolina and LSU without expending the resources required to carry on an active oat breeding program.

What does SunGrains receive in return? Increased regional cooperative testing of new breeding lines, which will now add multiple locations in South Carolina. As Boyles alluded to, sometimes breeding lines perform much better in target production regions within the southeastern US. So, it is vital to evaluate breeding lines annually in all of these regions to ensure the true value of a breeding line is revealed and to increase the return on investment of SunGrains.

The SunGrains concept for a research cooperative began to take shape in the 1990s between a handful of small grains breeders and, after no small amount of work and collaboration simply to clear the red tape, the group formally launched in 2003.

SunGrains also allows Clemson to add to a robust plant breeding program that is already conducting variety research in an array of crops important to the South Carolina agriculture industry, including peaches, soybeans, cotton, sorghum and others.

“Getting technology transfer and intellectual property litigation worked out just to share intellectual property and royalties among the institutions, that’s a huge hurdle — and for them to be able to do that and work all this out, now 15 years later, me as a new breeder just launching my career, I can stand on the shoulders of them launching this program and it’s helping me immensely do my job,” Boyles said.

But beyond the transitional phase of beginning a new program, the collaboration continues to prove beneficial to the member institutions.

Ron Barnett of the University of Florida pointed to his own status as an emeritus breeder in the state of Florida, which has very limited acreage for wheat and, thus, makes it difficult to justify significant funding for research and development of the crop without being able to demonstrate its benefits to agriculture elsewhere.

“The main thing about the cooperative program is that industry was not doing it,” Barnett said. “Still, to this day, private industry is not breeding small grains like they are corn and soybeans. The profit is just not there to do it. The crops are not important enough to industry to warrant that investment — but they are important to the farmers that grow them.

“Varieties have rather short lives and growers are constantly wanting new varieties that are more productive and resilient— and so breeders have to provide them.”

Barnett has been fully retired from his position at the university for roughly six years, but as a co-founder of the SunGrains program, said its evolution from humble beginnings to the benefits it now provides its member institutions has been remarkable.

“They have access to the new molecular marker work and genomic selection work, and I know they have a program going where they can generate homozygous, or uniform, lines much quicker by using what’s called a double haploid method,” Barnett said. “The creation of SunGrains made that possible. And it helps the members with leverage when they write grants, they can list all these cooperators and it strengthens any grant proposal they make.”

The benefits to Clemson rejoining the SunGrains group are clear, but researchers from the other member institutions say Clemson’s presence will bolster the group as a whole, as well.

“For North Carolina, in particular, I have long felt that the absence of a cooperator in South Carolina was equivalent to flying on one wing,” Murphy said. “I am delighted to have Rick Boyles revitalize this key Clemson effort. We have actually initiated cooperative research over and above the SunGrains framework because major areas of small grains production in North and South Carolina are contiguous, with many of the same production problems. Rick has developed a very strong program in a short time, and an impressive reputation inside and outside SunGrains.”

Get ready for ‘supercharged’ economy after pandemic

Get ready for ‘supercharged’ economy after pandemic

COLUMBIA — The Agribusiness Center for Research and Entrepreneurship (ACRE), in partnership with Clemson Cooperative Extension, is now accepti…

WATCH NOW: Row crops on target for average to above average yields

Timely rains and moderate temperatures this summer laid the groundwork for an average to above-average crop season this year.

‘A sad day for us all’ as weekly papers close; Bamberg, Holly Hill, Santee publish final editions this week

After decades of covering their communities, three weekly newspapers are preparing to close.

CLEMSON – Stone fruits and nut crops are vital to human health, communities and economies across the United States but a fungal disease threat…

Starkey Swine Center at Clemson to be closed

CLEMSON – Clemson University’s College of Agriculture, Forestry and Life Sciences has announced it will close its swine research facility at t…

SunGrains is helping Clemson University add a robust plant-breeding program that is already conducting variety research in an array of crops important to the South Carolina agriculture industry, including peaches, soybeans, cotton, sorghum and others.