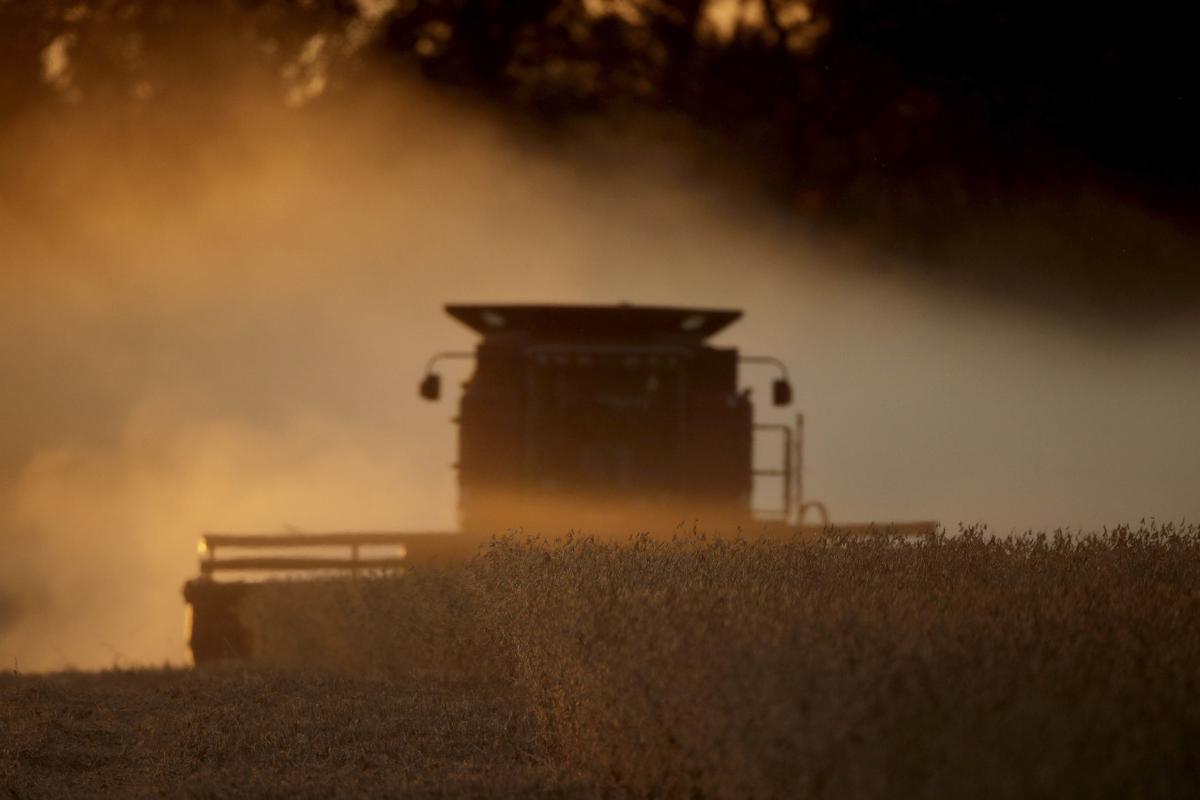 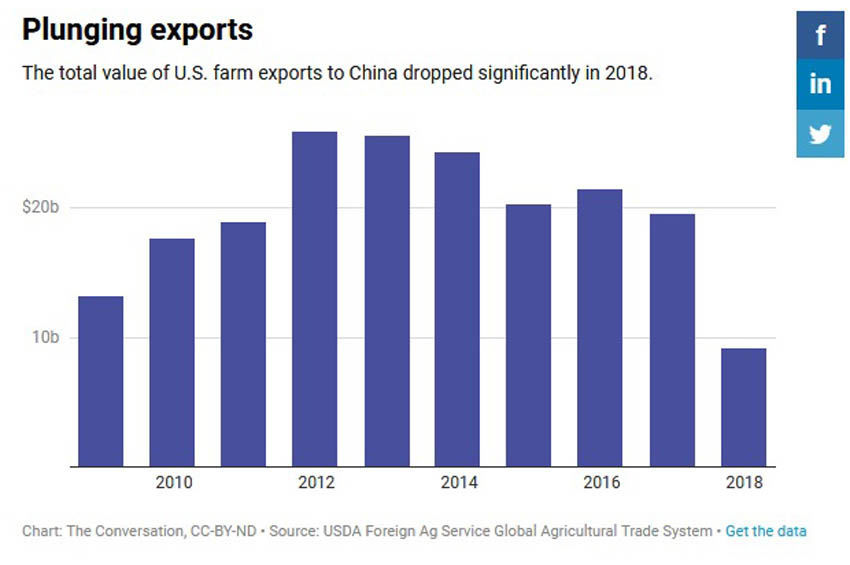 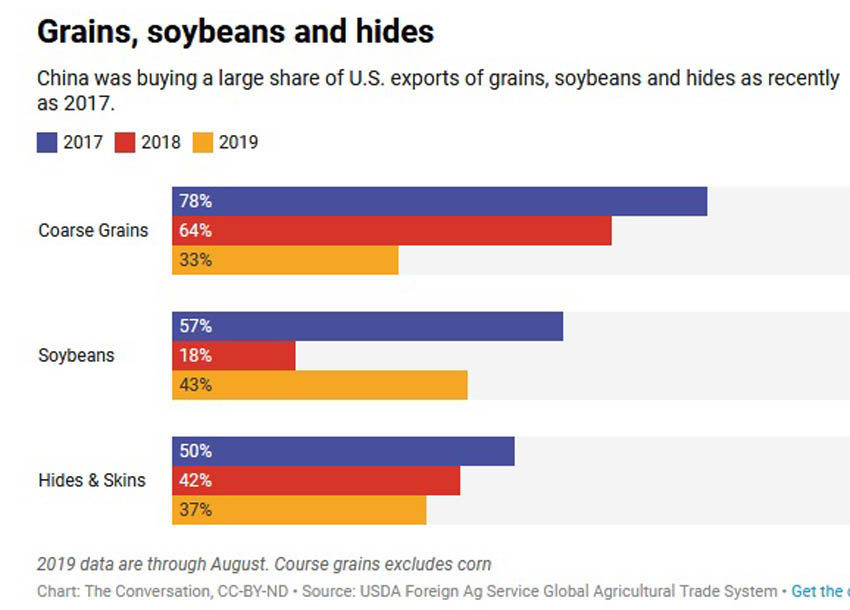 America’s farmers have borne the brunt of China’s retaliation in the trade war that President Donald Trump launched in 2018.

One reason: China is the biggest buyer of many U.S. agricultural products, such as soybeans, grain sorghum, cotton and cattle hides, which made these products an obvious target for retaliatory tariffs.

The other related reason is more strategic: China hoped inflicting economic costs on U.S. farmers – who voted overwhelmingly for Trump in 2016 – would in turn put pressure on the president to end his trade war.

Although farmers have lost billions of dollars in exports, China’s strategy hasn’t created the intended effect, with surveys of farmers continuing to show strong support for the president.

Encouraging signs for S.C. agriculture in a tough economy

We conducted our own survey of corn and soybean farmers. Published in October, it suggests three reasons farmers support Trump’s trade policies despite the costs.

Undoubtedly, China’s retaliatory tariffs on almost all U.S. agricultural exports, most notably soybeans, feed grains and pork products, have been painful for farmers.

Over 80% of the 693 Iowa, Illinois and Minnesota farmers we surveyed from February through June said trade disruptions had an adverse effect on their net farm income in 2018. Almost a third reported that their income dropped by over 20%.

But the Trump administration’s efforts to ease their pain have paid off. The administration gave soybean, sorghum and other farmers $12 billion in assistance in 2018, which the vast majority of our survey participants found useful. The survey was conducted before an additional $16 billion in payments went to farmers this year, both to offset trade losses as well as the effects of too much rain.

We also found that farmers largely view the trade disruption as short-term pain for long-term gain.

While only 14% think their farm operations will be better off financially a year from now, more than half said they expected something good to ultimately come out of the trade war. And about 44% said they believe the U.S. economy will be stronger in three years. China’s 2017 decision to allow imports of U.S. beef and its 2020 national ethanol mandate also give farmers hope for new export opportunities.

In other words, most farmers are prepared to sacrifice income for a while on the belief they’ll make up for it down the road. Since agriculture is a highly cyclical industry, this sanguine view is understandable.

In fact, U.S. agricultural exports to China this year rebounded a bit compared with a year ago, thanks to China’s recent exemptions of tariffs on U.S. soybeans and pork products.

For example, China shut out U.S. beef for 14 years over a mad cow scare in 2003, keeping the ban more than a decade after other countries like Japan and South Korea lifted theirs.

Chinese purchase of products such as distillers grains or corn sometime just disappears. These may have been offshoots of adjustments China made to its corn-support policy, but, from the perspective of U.S. farmers, Chinese demand for certain U.S. agricultural commodities has been annoyingly inconsistent.

Although we didn’t ask survey participants a specific question on this topic, many farmers provided their own unsolicited comments that voiced this frustration.

“The Chinese do not play by the rules,” one Illinois farmer said. “They cancel shipment orders that are not in their favor. They continue to steal our patents. Only President Trump has tried to stop these unfair trade practices.”

Or as a farmer from Minnesota explained: “China imposed the tariffs and refused to buy soybeans in an attempt to hurt our agriculture and get us to turn against a president they do not want. They have been stealing technology and jobs for too long and giving us back inferior goods. Prior to this, they manipulated our markets by buying and then canceling or refusing shipments of grain.”

The possibility of relief

Our survey showed that most farmers recognize that they will continue to be the biggest victims of the U.S.-China trade war and will likely lose markets – some permanently – as China diversifies away from American producers.

As one Illinois farmer who was less supportive of tariffs put it, “We are not the only game in town.” U.S. agricultural exports will face growing competition from Brazil on soybeans and from Europe and Australia on meat.

Yet 56% still said they supported imposing tariffs on Chinese products, while only 30% oppose them.

The latest news that China and the U.S. are poised to sign “phase one” of a possible comprehensive trade deal – which involves China committing to buy $40 billion to $50 billion worth of U.S. farm products – offers the possibility of relief for farmers. And so, heading into an election year, it will likely bolster support for Trump and his strong-arm trade policies.

Which 'Peanuts' character are you?